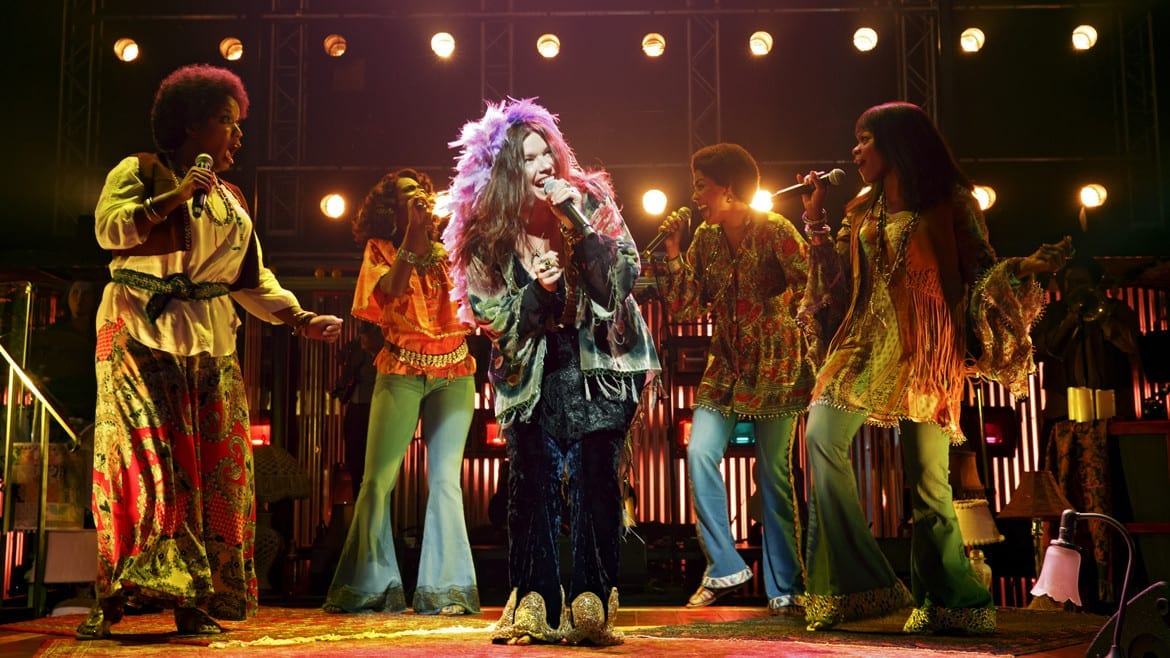 Relive the rock with "A Night with Janis Joplin" at the Kauffman Center this weekend. (Credit: Theater League)
Share this story

Who doesn’t adore Spring? Lovers love it. Poets sing its praises. Animals get frisky. Trees bud and flowers bloom. Everyone, but everyone, loves springtime. That is, unless you happen to have allergies. In that case, spring means six weeks of itchy eyes and a runny nose. Spring can also mean rain. Which, thank goodness, it looks like we might get this weekend. Wet or not, however, we have plenty of ways for you to have fun around town.

If you are a basketball fan, at least in this part of the country, what you care about is Kansas. The No. 1-overall Jayhawks play Maryland late on Thursday night for a chance at the Elite Eight. If KU can beat the Terrapins, the ‘Hawks play the winner of the Miami and Villanova tilt. The winner of that game goes to the Final Four. Pretty much any bar on the Kansas side, and half of those in Missouri, will have watch parties. Rock chalk.

If basketball isn’t your game, there’s soccer in town. Sporting KC doesn’t play again until April 2, but you can still you can catch a little indoor “wall ball” when the Missouri Comets host the Baltimore Blast. Beyond that, sports fans will have to wait a couple more weeks before the World Champion Royals (it’s still hard to believe we get to say that) begin their defense of the crown.

Easter is on Sunday, of course. If you celebrate the holiday, that means church. Even if you don’t, there’s nothing to stop you from enjoying an Easter Parade. Zona Rosa is a fine spot for that. The shopping mall will block off several streets for a walking parade and everyone in the city is invited. There are tons of prizes for the best dressed, so be sure to don your swankiest pastel finery. After the parade, entertainment includes live music, face painting, balloon art, a children’s petting zoo, and, of course, a visit from the Easter Bunny.

That Easter bunny gets around. He (or is it she?) will also be at Union Station on Saturday for the Third Annual Easter Eggstravaganza. There’s a lot of Peep-centric events at this one. Like “Peeps in a Vacuum” in the Demo Area or a “Peeps Derby” in the Maker Studio. If you and your peeps want to go, check here for more details.

There’s even more kid-friendly fun at Sprint Center with Disney on Ice. All the usual suspects will be there, including Mickey, Minnie, Donald, Goofy, and an array of Disney princesses. You’ll hear songs from, appropriately for an ice show, “Frozen,” as well as “The Lion King,” “Beauty and the Beast,” “Aladdin,” and so on.

For more grown-up good times, get down to Union Station and try some local wines. This weekend brings the inaugural edition of Uncorked, a KC wine festival set for March 26th in the warm, dry environs of the station’s grand ballroom. The event features vino from more than 50 wineries, including many made close to home. There will be food trucks on hand and free live music. Admission includes unlimited tastings, so it might get a little sloppy. Cocktail attire is requested, but not required. Just don’t wear, like, shorts and a T-shirt.

You can wear whatever you want to drink beer. Especially if you go to the Crafts and Drafts festival, a free event combining more than 90 craft vendors with over 20 beers available for sale. That event is in the parking lot next to the Uptown Theater, so you might want to check the weather and bring an umbrella. Or maybe just drink enough brew so that you don’t care about getting wet.

Do you know Winfield? More formally known as the Walnut Valley Festival in Winfield, Kansas, it’s one of the nation’s premier events celebrating country, folk and bluegrass music. “Halfway to Winfield” is an annual event that raises awareness of the Festival, and this year’s version is a humdinger. Set for Saturday night in Knucklehead’s Garage, acts such as Loaded Goat and Ben Miller Band will highlight a bill packed with pickin’ and, presumably, grinnin’.

At The Music Hall you can see The Legend of Zelda: Symphony of the Goddesses — Master Quest, a concert tour featuring music from Nintendo’s The Legend of Zelda video game series. No, seriously. It’s a thing that exists – and a pretty popular one at that.

Delve into the world and movement of gamelan, traditional ensemble music from Bali.
(Photo: EG Schempf)

For music with a little more edge, get to the Kauffman Center and spend “A Night With Janis Joplin.” Or at least a night of tribute to her. Mary Bridget Davies has won raves for her spot-on portrayal of the star-crossed legend, including performances of classic such as “Me and Bobby McGee,” “Piece of My Heart,” “Mercedes Benz,” and “Summertime.” That’s not the only classic rock tribute on tap, either. You can spend all weekend reliving the past at VooDoo Lounge. Thursday night, Robby Krieger Band performs the songs of The Doors. Friday night, Interstellar Overdrive pays homage to Pink Floyd, and Saturday night the casino will host Liverpool, a tribute to the Beatles. Find tickets and showtimes here.

Did you know that Kansas City has a gamelan ensemble? For that matter, do you know what gamelan is? Neither did we. It’s the traditional ensemble music of Bali, made up mostly of percussive instruments. Ketut Gede Asnawa, who taught the Balinese musical form at UMKC’s Conservatory of Music and Dance, is returning to lead the group he founded, Gamelan Genta Kasturi. The show is set for Saturday night, and will include dance numbers performed by Asnawa’s wife and two daughters. The performance is free and open to the public, with donations gratefully accepted. Here’s a sample of what you’ll see and hear.

Last weekend, the Kansas City Repertory Theater had what you might call the “soft open” for “The Fantasticks.” This weekend, you can see the show in all its polished glory. The play, which premiered off-Broadway in 1960, has been insanely popular, running for a total of 42 years and 17,162 performances. You’ll see the story – just in case you missed all 17,162 of the previous performances — of a boy and a girl whose fathers hatch a plan to bring them together. Hijinks, as they often will, ensue. The KC Rep’s production is innovatively staged in the round.

For darker fare, UMKC Opera Theatre will present “Turn of the Screw.” Directed by Fenlon Lamb and guest conducted by John Baril, Benjamin Britten’s spooky chamber opera is based on the famed Henry James novel. Which means, of course, the show follows the strange story of a new governess at Bly House. Performances are at 7:30pm, all weekend at White Recital Hall on the UMKC campus.

If you like music that’s “filthy, brutal, and unforgiving” check out Excision at the Midland. The show, according to their own press material, is “a virtual apocalypse of twisting and morphing sounds” including “virtual walls of bass” that are “relentlessly impaled time and time again” on the crowd’s “fragile bodies and ears.” That’s not really the proper use of “impaled,” but never mind. If you want to experience 150,000 watts of EDM sound and a dazzling light show, get to the Midland on Friday night,

After that show, you’ll need a laugh. You can find a giggle or two by seeing local-boy-made-good, Mike Smith. It’s a long way from prison to a stand-up comedy stage, but Smith has made that journey. He’s opened for stars including Kevin Hart, Dave Chappelle, Katt Williams. See his thoughtful comedy all weekend at Sanford’s. Jo Koy is offering laughs up north. Koy is best known as a regular guest on “Chelsea Lately.” Expect a lot of ethnic humor when he performs at the Improv. Just be sure to take your allergy meds, or you’ll be sneezing though the whole show.

— Hampton Stevens covers the arts and entertainment for regional and national publications. Follow him @HamptonStevens.