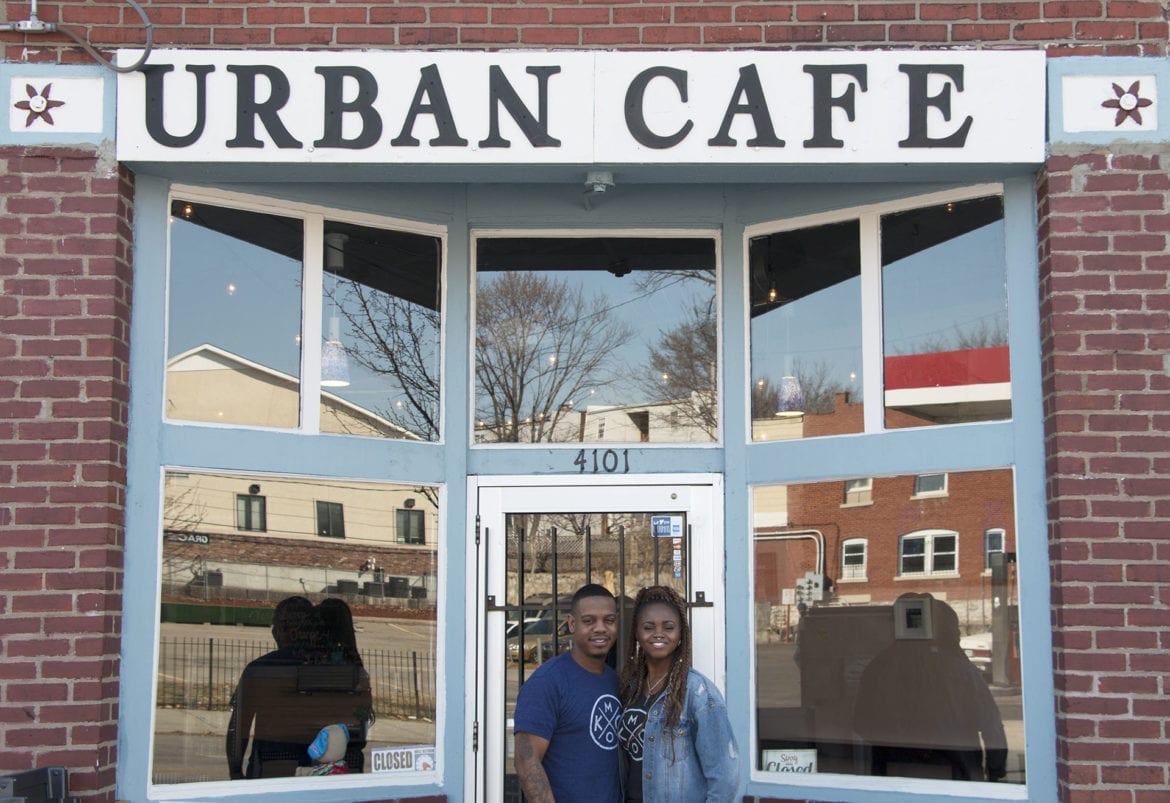 Urban Cafe is located at 41st street and Troost Avenue. The Clarks also own the salon next door, Love Over Hair. (Kelly Cordingley | Flatland)
Share this story

Rashaun Clark grew up at 41st Street and Bellefontaine Avenue, a few blocks from where she and her husband are raising their three young daughters. Growing up, Rashaun felt like fast-food options were the only choice for eating out. More than a decade later, her daughters are growing up in a restaurant that serves vegan fare.

On Jan. 9, Rashaun Clark and her husband, Justin Clark, opened Urban Cafe at the corner of 41st Street and Troost Avenue, next door to Rashaun’s salon, Love Over Hair. The cafe offers locally sourced, healthy food and vegan options, something that wasn’t in the area when Rashaun was growing up there.

But Justin and Rashaun want this to be their community’s starting point toward a healthier future. When patrons come in, they’re likely to see two of the Clarks’ three daughters playing in the kids corner while their big sister is at school.

“They watch us, the highs, the lows,” Rashaun said. “Hopefully it’s teaching them that anything is possible, they can do whatever they want. We scraped up what we had to make our dreams come true, and hopefully we’ll pave the way and make it a little bit easier for them.” 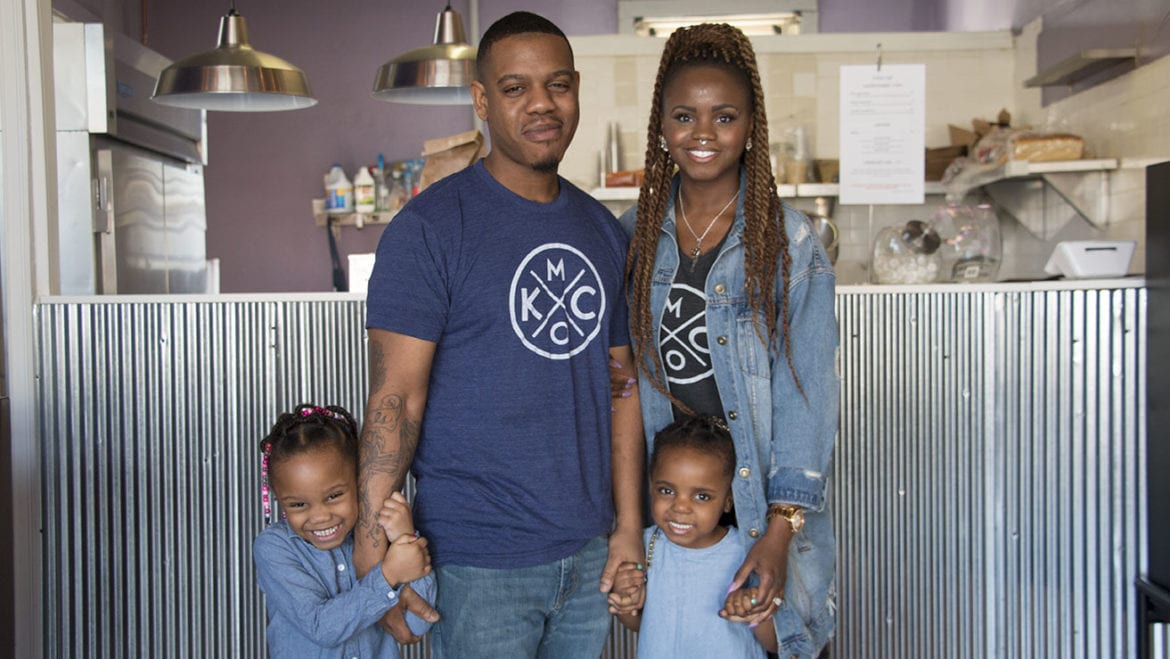 Before they opened their doors, Justin said the community was already excited about the new addition.

“[The community] saw us working on this all last year, so people stopped by, and when we put up the sign, they just came,” Justin said. “Now we’re trying to keep up.”

The restaurant, open from 6:30 a.m. to 4:30 p.m. Tuesday through Saturday, sources its vegetables from Manheim Park Community Garden just down the road. Before Justin had the opportunity to approach the garden, the gardeners came to him.

Steve Sackin, one of the community gardeners, said that because the garden is within walking distance of Urban Cafe, a partnership was the logical step.

“With Justin, who uses a lot of food, and having a restaurant in the neighborhood, it’s pretty exciting,” Sackin said. “I mentioned it to him, but he’d been looking to making contact, and we kind of found each other.”

Urban Cafe has already used arugula and spinach from Manheim and will source other vegetables as the season warms.

Justin went to culinary school in Chicago before working as a chef at the Fairmont Hotel in Millennium Park. He also worked under Phillip Foss, a Michelin-star chef, before coming back to Kansas City, where he worked at the Westin Kansas City Crown Center and as the catering chef for Truman Hospitals. Justin said having a mentor like Foss inspired him to dream bigger.

During his time at Truman, his mother was diagnosed with colon cancer. She beat the disease, Justin said, by changing her diet to clean eating and taking up meditation. That change prompted the vegan options on Urban Cafe’s menu.

“Even if you’re not a vegan, you can be a vegan for one day, and that’ll probably change a lot for your body,” Justin said.

The cafe’s current vegan options are chickpea tacos and collard green wraps, but those will change seasonally.

The non-vegan choices, though, still offer a healthy alternative to the fast-food options in the area, like the KFC, Taco Bell and Burger King a few blocks away.

The breakfasts include a turkey sausage bagel, chocolate smoothie bowl, and a bacon, egg, and cheese plate. They also offer grab-and-go meals, ranging from overnight oats with seasonal fruit to parfaits.

The lunch menu has salads, wraps and sandwiches. The pork belly sandwich with Asian slaw is the Clarks’ favorite, and it has been a hit with diners. 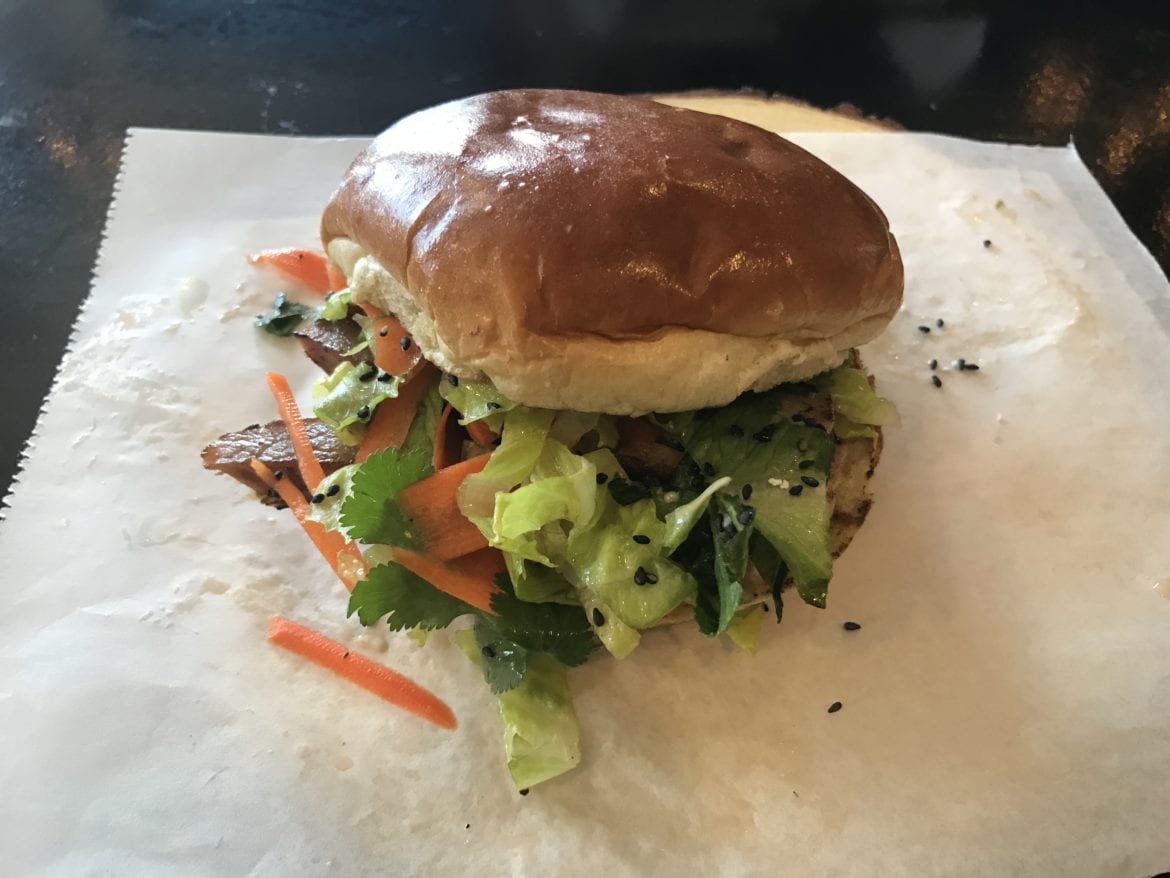 Justin marinates the pork belly in a mixture of fish sauce, lime juice, cilantro, Thai chilies and other Asian-inspired flavors. He smokes the pork belly and then pairs it with Asian slaw, which is tossed in the same mixture.

For some patrons, the menu items aren’t familiar. Justin said part of their mission is to expose the community to different culinary experiences and create a channel of learning through healthy food.

“Somebody has come in here and asked me to describe the pork belly, and I say, ‘Yeah, it’s pork belly and Asian slaw,’ and the next thing you know, he asks, ‘What’s the meat?’ Some people just don’t know,” he said.

Justin said that along with educating the community about different culinary experiences, they’re hoping to be the starting point for change. They’ve been approached about expanding further down Troost in the future but say they’re just trying to get a handle on what’s in front of them.

“This alone will be history just by us putting it here; we’re just the first ones that did it,” Justin said. “All it needs is some love.”