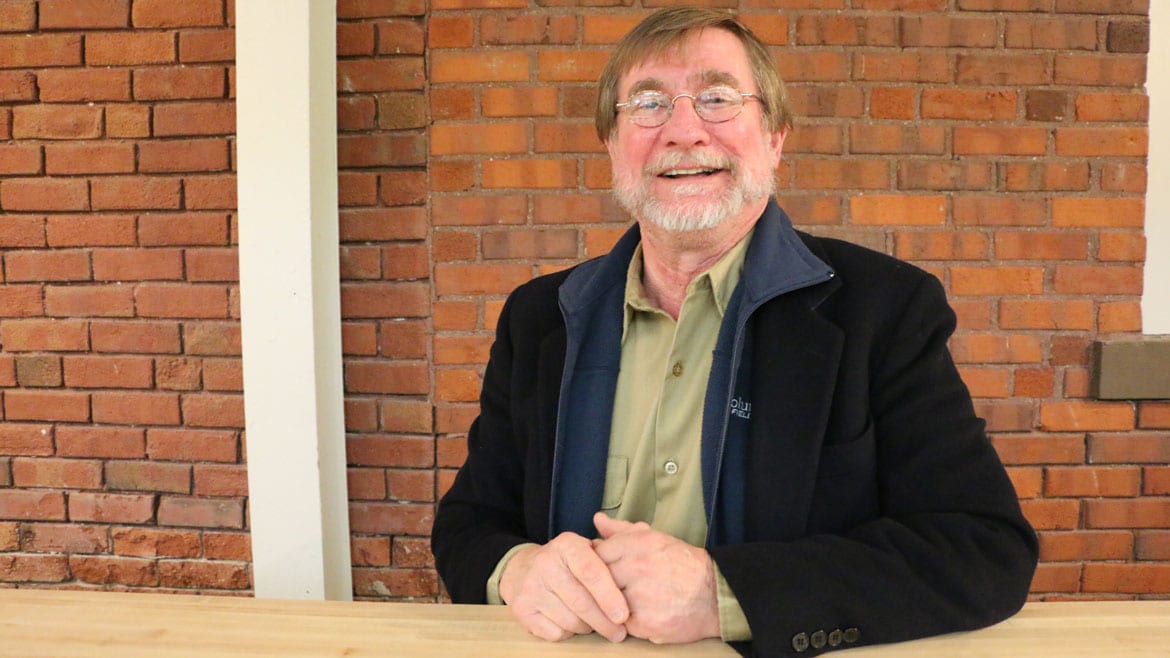 Tom Averill, author of "A Carol Dickens Christmas," visited the Hale Center to discuss all things Charles Dickens and the holidays. (photo by Caitlin Cress/Hale Center for Journalism.)
Share this story

Tom Averill and his family are avid fans of Charles Dickens’ “A Christmas Carol.” You know: Scrooge, “bah humbug!,” Tiny Tim Cratchit and the Ghost of Christmas Past?

The family has such a love for the Dickens’ work that it is incorporated into holiday celebrations: Averill, his wife and children have read the book aloud to pass the time on multiple Christmastime road trips from Topeka, Kansas, to Dallas. Even when they’re not making that trip, they still read several chapters of the novel on Christmas Eve to get into the holiday spirit.

Averill remembers celebrating one Christmas with his family by eating a replication of the meager meal the impoverished Cratchits make do with: a small goose, sliced apples and sage and onion dressing.

“We had about a six- or nine-pound goose that we spread over 12 people, and it wasn’t much,” Averill said. “We replicated the poverty of that Cratchit meal as a way of contrasting with what’s going to happen on some other Christmas meal when everybody’s gorging.”

Averill has turned this fondness for Dickens into a new Christmas-themed novel set in his hometown of Topeka: “A Carol Dickens Christmas.”  He will speak about his newest book at the Kansas City Public Library’s Central branch Sunday, Dec. 14.

The author and writer-in-residence at Washburn University visited the Hale Center to discuss literary inspiration, the importance of a holiday menu and the Christmas season.

Here’s an excerpt from that conversation.

HCJ: What’s the novel about?

Averill: My main character is Carol Dickens. She has a son, Finn Dickens Dunmore, who has announced to her, close to Christmastime, that he is going to be leaving home at semester and going to college early. Carol has the opportunity to give her son the last, best traditional Christmas with all of their rituals and that kind of thing, and Finn is really bent on making the transition out of there.

The cover of the book shows Carol’s pudding going up in flames, and I think that’s how she’s worried about what’s going to (go wrong) this particular Christmas.

HCJ: How does the novel pay tribute to Dickens?

The novel is set between Dec. 12 and Jan. 6, at the end of the Twelve Days of Christmas. It’s a tribute to Charles Dickens’ invention, really, of the contemporary, more-or-less secular Christmas that we have now, and the sort of sense of Christmas as a spirit that’s within people.

I research Dickens quite a bit, and I read his other Christmas novels, but my sense of the real mastery that’s in ‘Christmas Carol’ is that all of the characters are all so seemingly different, but we contain all of those characters within ourselves. We’re all a little ‘Scrooge-y’ at times; we’re all generous hosts like nephew Fred, and we all have the Ghost of Christmas Past and Present, and we all have the guilt for those who don’t have as much as we do.

Dickens also has this sense that we’re all connected, and, so, in a town like Topeka where this is set, there are several characters who sort of seem to, like Santa Claus, know who’s naughty and who’s nice and what’s going on in places. Dickens taught us, in all of his novels, that we’re all connected together. His novels are full of eccentric characters, coincidences, and this novel is full of those same things, plus his kind of spirit of the season.

HCJ: Are there other literary inspirations?

Averill: Finn gets involved with a high school classmate who needs a safe place to have a baby. She’s pregnant out of wedlock, and that’s another part of the (Biblical) Christmas story. I’ve got these three sort of ‘wise guys’ in the book. I’m playing with Christmas as a story and all the Christmas stories that are there: ‘The Night Before Christmas,’ ‘The Grinch Who Stole Christmas,’ Truman Capote’s (short story ‘A Christmas Memory’). There was so much to work with. I tried to work in as many little allusions in there as I could.

HCJ: The novel includes recipes. Why did you decide to do that?

Averill: I’ve always played with food in my books, and I wanted to give Carol a sort of passion that grounded her in the season, and so she, looking through ‘A Christmas Carol,’ she creates five meals that she always fixes during the Christmas season. It starts with a very unassuming meal, which is the meal Scrooge has right after he is asked by the philanthropist to give some money and he says, ‘Bah humbug!’ Then he goes to this dank tavern and eats just a blot of cheese and beef and underdone potato. So Carol makes this nice beef and fried, melted cheese and potato dish and they always start their Christmas by eating that lowly tavern food. Then they work their way up to the Christmas feast of turkey and hens and all of those things.

I like reading books that have recipes in them because they usually say something about the characters and what they’re going through. Some people will skip the recipes, foodie people will say ‘oh, that’s interesting. I may try that.’ Some might say, though, ‘well that tells me something about Carol Dickens. She’s a little sweet and a little sour, too, isn’t she?’

HCJ: I noticed that some of the recipes have a Hispanic flair. Where does this come into the plot?

Averill: Finn is a kid who likes to walk at night. At Christmas, he loves to go into the Oakland neighborhood, and that’s a predominantly Mexican-American community. During Christmas, they have beautiful lights. Finn calls it a ‘fiesta of faith.’ (It’s on one of these walks that Finn meets his pregnant classmate.) She has an aunt who plays mariachi, and Finn plays the trumpet. He’s very interested in all cultures and how they use the trumpet.

HCJ: Why should readers come to your library talk?

Averill: They’ll learn about the making of the book, some of the research behind the book, and then I’ll read some passages and try to get a sense of the dramatic potential that’s in the relationship between the characters. I think what really makes a book work is that people really want to be with the characters and care about them and want to see how it all turns out for them.

Tom Averill will discuss “A Carol Dickens Christmas” at the Kansas City Public Library’s Central branch Sunday, Dec. 14.  You can RSVP to the library talk here.

And, for a taste of the book, make these twice-baked sweet potatoes from the novel. 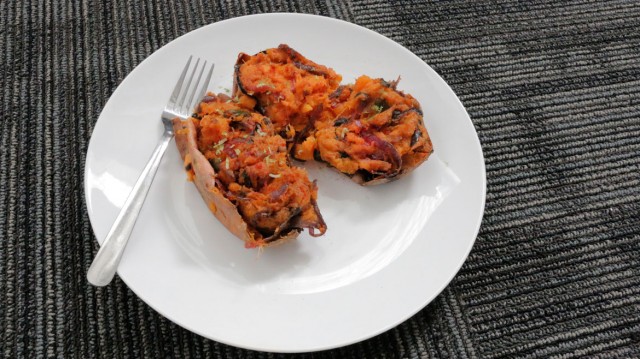 “I’m always frustrated when I eat sweet potatoes that somebody’s put sugar and marshmallows on when they’re already sweet,” Averill said. “I like to take sweet potatoes and put a little chile, a little caramelized onion, something that kind of works with and against the kind of dominant flavor of the sweet potato.”

Bake sweet potatoes, remove from skins, place in baking dish, and cover with onions and poblano peppers, roasted and cut into strips. Sprinkle the lime juice, then paprika over the top and bake until everything is heated through.