This week, the new Harry Truman exhibit could be Kansas City’s toughest ticket.

On Friday, July 2, Harry S. Truman Library & Museum officials will reopen the Independence institution after a nearly two-year shutdown for a $29 million makeover.

Following COVID-19 protocols, the museum will be operating at limited capacity. For those who go, the experience will be immersive.

Beginning Monday, June 28, those wishing to visit the redesigned and renovated Harry S. Truman Library & Museum can purchase timed tickets in advance at TrumanLibrary.gov. To observe COVID-19 protocols, the facility will be operating at limited capacity. 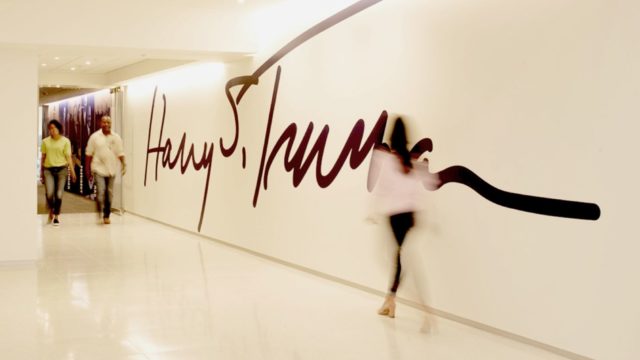 Archival images will appear on circular interior walls, then vanish to be replaced by others.

In a room devoted to the “Red Scare” of the Cold War, guests will be bathed in red overhead light while their loyalties are tested by a virtual bank of faceless interrogators.

However familiar the Truman story may be to those across the Kansas City area, never before has that story benefited from such advanced production values.

“We completely re-imagined the Truman legacy for a 21st century audience.”

The renovation is the largest in the library’s 64-year-history. The building’s main entrance has been moved from the south side to the east side, where a 3,000-square-foot addition featuring a floor-to-ceiling glass façade has been constructed.

Beginning there, visitors will experience a more seamless presentation of the 33rd president’s story.

Previously, guests had viewed exhibits detailing Truman’s presidential administration on the library’s main floor before descending to a lower level to learn about his pre-presidential life.

Visitors now will follow a more coherent path, encountering assorted corners, cul-de-sacs and alcoves – some of them aptly named “theaters” – to find familiar Truman narratives made new. They include:

Lights rise and then fall in a space devoted to Truman’s 1918 experience as an artillery battery captain. Archival war-time footage of soldiers drilling and marching are juxtaposed behind a mock barbed-wire battlefield featuring an example of the kind of field gun Truman’s battery members used in France – a presentation realistic down to the faux footprints visible in the fake mud.

The light is similarly church-like dim in the gallery exhibiting one of the last surviving tiny origami paper cranes folded by Sadako Sasaki, a Hiroshima girl who survived that city’s Aug. 6, 1945 atomic bombing only to die 10 years later from leukemia attributed to radiation exposure.

The crane, given to the library in 2015 as a symbol of peace and reconciliation, is displayed adjacent to an exhibit featuring the safety plug from “Fat Man,” the plutonium bomb deployed over Nagasaki on Aug. 9, 1945.

To illustrate the challenges facing Truman following the Japanese surrender, visitors can consider a 14-foot-diameter globe in which surface fissures are illuminated while archival footage is projected onto its surface highlighting the various crises developing in Asia, Europe and America.

Meanwhile, archival footage depicts Hollywood figures such as actor Robert Taylor and studio head Walt Disney testifying before the House Un-American Activities Committee regarding the alleged influence of communists in the entertainment industry.

While visitors process all this, they also will be invited to role-play – sit down at a table, put on headphones and take questions from a “Loyalty Review Board” made up of faceless questioners as to whether they believe the United States should be allied with the Soviet Union, or whether they know any homosexuals.

“Do you associate with them?” guests will be asked.

The answers, when given, will figure in each visitor’s “threat level,” calculated on screen after each response.

Meanwhile, overhead lights rotate to blue, yellow and some shades in between. Forget President Truman’s famous buck-stopping – this hot seat should command the attention of any GameStop patron.

One imperative was a looming large number – the 75th anniversary of Truman becoming president upon the April 12, 1945 death of President Franklin Roosevelt.

Another was the state of the existing Truman Library & Museum exhibit technology.

In 2001 library officials – knowing that those claiming personal memories of Harry Truman likely were receiving Social Security benefits – unveiled a $22.5 million renovation that sought to serve a younger demographic.

The exhibits often featured interactive touch-screen technology that allowed visitors to watch videos detailing issues specific to the Truman Administration and then register their own sympathies or reactions.

Yet, after 2001, the digital revolution continued apace, leaving that same software to grow clunky or balky.

“A lot of the technology was based on old platforms like Windows 95,” said Clay Bauske, museum curator.

“I remember one meeting where Kurt, Clay and I were talking (about) whether we should go big or small,” Burden said.

“At that point the (institute) board members had approved money in the budget for the master planning process, but I think in their minds they were thinking about freshening up the old exhibits.

“Kurt had to convince me and the board that we should go big. We are all glad that he did.”

The decision made sense in several ways.

One reality was the unceasing interest in Truman and his presidency. Today Truman continues to be considered in the top tier of presidents and scholarship has continued accordingly, said Cassie Pikarsky, Truman Library Institute strategic initiatives director.

“We’ve had 20 more years of research into Truman and his administration,” she said.

Also serving to support a dramatic makeover was the continuing growth in museum exhibit technology.

Other Gallagher & Associates projects have included libraries devoted to former presidents Lyndon Johnson and Ronald Reagan, as well as the National Blues Museum in St. Louis and the Grammy Museum in Los Angeles.

Visitors who are alert to the museum’s audio recordings may recognize familiar voices.

In what museum staffers call the “rubble room” – named for the artful scattering of faux post-war debris to suggest postwar Europe – George Stephanopoulos, host of ABC’s “This Week” program, supplies the narration.

“The way a museum relates to its audience today is different than it was 20 years ago,” Graham said.

The capital campaign for the project, which began about four years ago, so far has raised $38.6 million, Burden said.

About $8 million has come from federal and state appropriations, with the rest given by private donors. While the exhibit itself cost $29 million, Burden hopes to see $40 million eventually raised, with the balance being set aside for various programming, educational and endowment needs.

More than 25,000 individual donors have contributed, including the widow of a World War II veteran who recently gave $1 million.

Foundations also have stepped up.

”Kansas City is an incredible philanthropic community which definitely punches above its weight,” Graham said.

But Truman’s legacy also made the library institute’s funding requests that much easier in a polarized political landscape, Graham added.

“As we talk to donors, we are so fortunate to have the Truman legacy,” he said. “We don’t just attract people from one side of the political continuum.

“We know Truman had to make a lot of decisions, but what is important is that he always returned to a moral core. When he made those decisions, he was always rooted in principle.

“I’m not suggesting that Harry Truman got every decision right. But I think the reason people from both the right and the left so admire and respect Harry Truman is because of the way he made those decisions and the way he conducted himself while in office.”

The new displays include a larger number of artifacts than previously displayed. From the beginning of the planning process, library and museum staff members were included in the dialogue, Bauske said.

“It was much more of a team effort this time around,” Bauske said. “Library and museum staff people were involved and it really shows in the final product.”

Just as more has become known about Truman in the last 20 years, more artifacts have been acquired over that time. This is clear in the exhibit devoted to the Korean War, which includes a nurse’s uniform as well as equipment from a mobile Army surgical hospital (MASH) unit.

The artifacts, Bauske said, came to the Truman Library from the Korean War National Museum of Springfield, Illinois, which closed in 2017.

Yet for all the cutting-edge hardware and software deployed in support of Truman’s story, Graham is confident that visitors of any age will recognize the 33rd president’s life as the remarkable story it’s always been.

“Why would they care?”

“Well, they care because Truman changed the world they live in. Literally the lines on the map are different because this farmer from Missouri ascended to the highest office in the land.”

Flatland contributor Brian Burnes is a Kansas City area writer and author. He is serving as president of the Jackson County Historical Society. Burnes once contributed to the Truman Library Institute’s magazine.