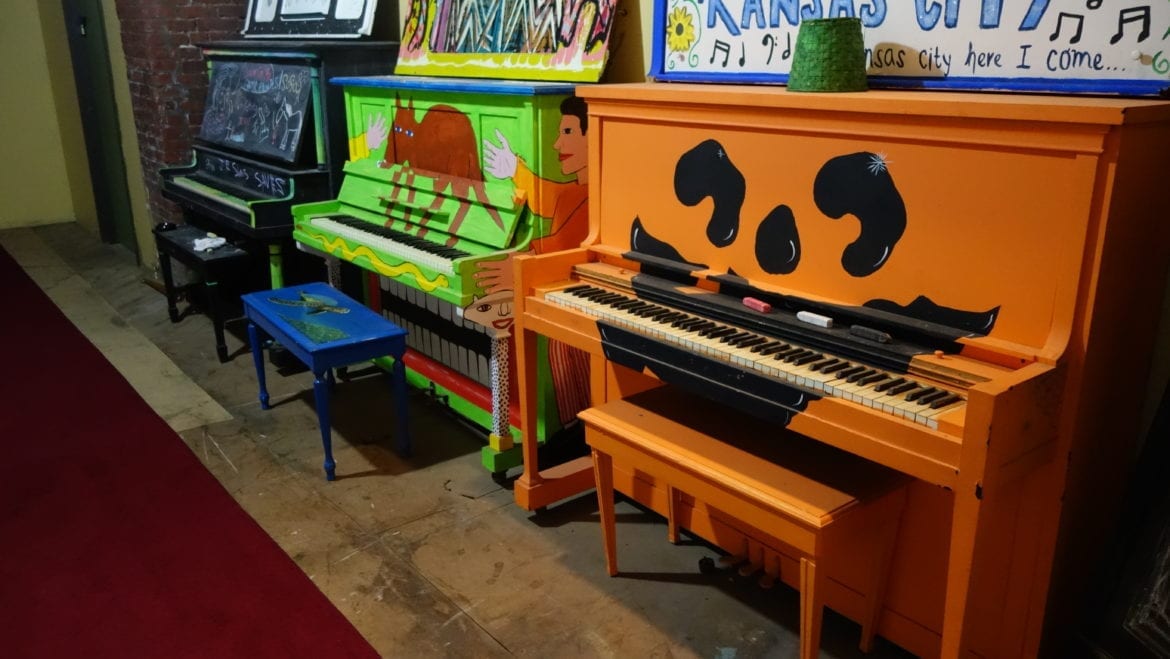 Painted pianos welcome customers to the sales floor. K4K transforms old pianos for new use - often asking children and local artists to paint the pianos before delivering them to locations around the city. (Photo: Dan Calderon | Flatland)
Share this story

On the third floor of a creaky warehouse in the West Bottoms sits an army of pianos. They are meticulously arranged in rows, with price tags that comically belie their monetary value – and more importantly, the value the instruments could bring to their potential recipients.

The pianos have formed rank in this spot, thanks to many donors, a lot of sweat and the direction of Keys 4/4 Kids – a Minnesota-based nonprofit that aims to save old pianos by repairing and re-circulating them to families and organizations who otherwise couldn’t afford one. The organization operates in four cities: St. Paul and Belle Plaine, Minnesota; Chicago and Kansas City. 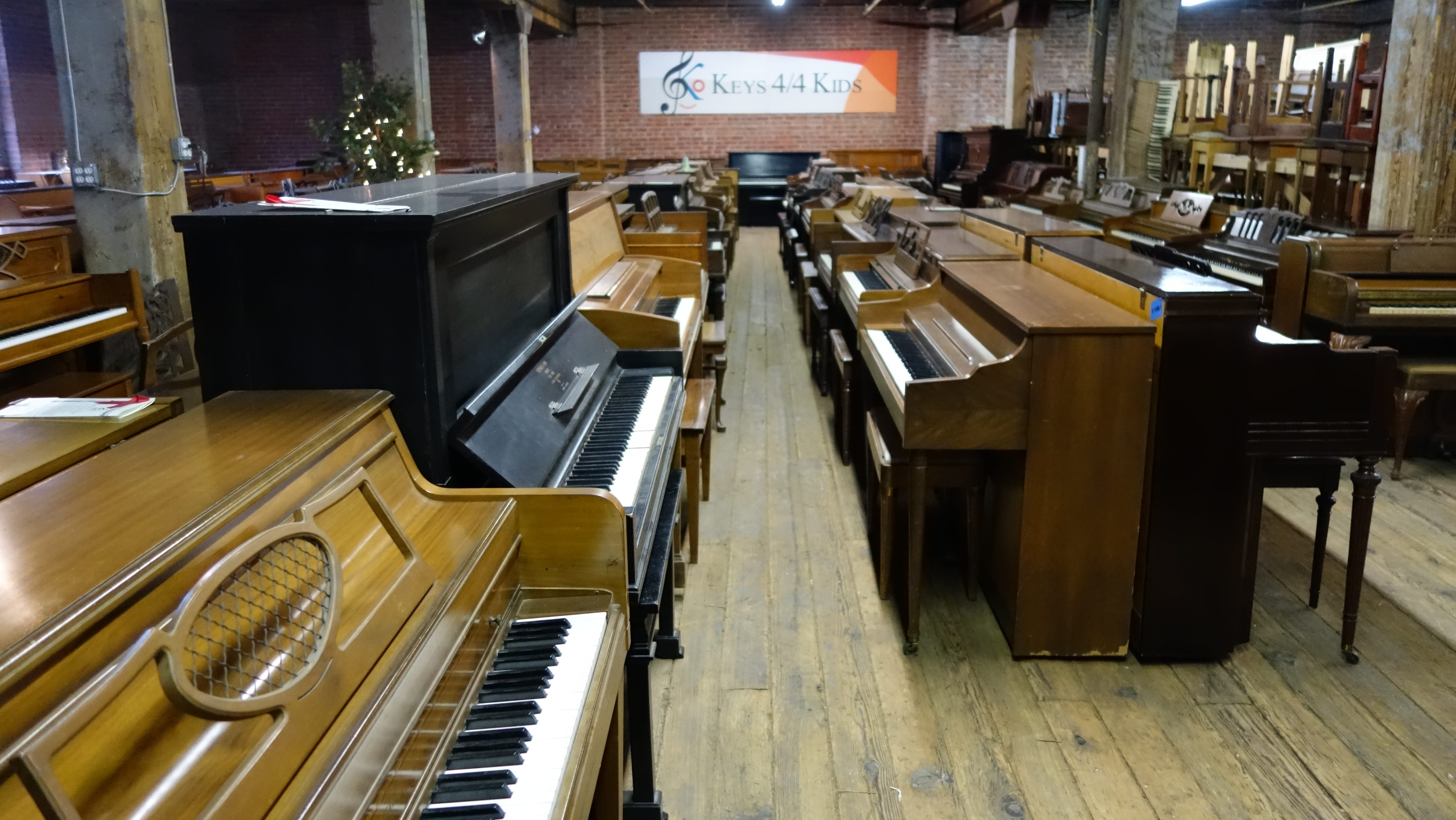 The spirit of the organization was born in 2000 when its founder, Newell Hill, attended the University of Minnesota. Hill volunteered in an after-school program where he taught piano lessons. And it was there that he first observed the impact music can have on the lives of children.

“I think it’s important for children to have an opportunity to participate in the arts because it contributes to their experience with life,” Hill said. “It’s beyond just basic need. It adds a dimension and texture to a person’s life that provides meaning on an emotional level.”

As his after-school program expanded, it required more funding. To generate additional revenue, Hill purchased old pianos at garage sales, repaired them and resold them for a small profit. Between the money Hill earned from his repairs and grant funding, the program prospered for a number of years. But when the Great Recession hit in 2007, outside funding became scarce.

Hill then developed a new model for K4K that relied more on piano sales than grants and monetary donations. Donors are now charged a small fee for the packing and moving of the pianos and given a tax receipt. K4K then repairs and sells the pianos.

The response was overwhelming, though somewhat unexpected.

“I was surprised that people were willing to be charged to donate pianos,” Hill said. “But I think that stems from the fact that pianos have sentimental value. People have memories of being a child and learning how to play the piano or singing songs with their family around Christmas time. So they don’t want to just throw the piano away or sell it on Craigslist.”

Under the new model, the program grew, allowing Hill to open satellite locations in Chicago and Kansas City to complement his two Minnesota locations. Hill chose Kansas City based on its size and because it seemed like a good fit.

“I visited Kansas City and St. Louis when looking for new locations, and KC seemed like it had a lot going on economically,” Hill said. “It seemed like a vibrant, lively city, so we decided to open a spot there.”

Central to K4K’s operation is acquiring the pianos from donors. Hill estimates the organization collects around 2,500 pianos a year from all of its markets, with 140 of those pianos being donated to its Kansas City location last year. According to Mike Kelly, operations manager for the Kansas City location, those donors come from an array of backgrounds. 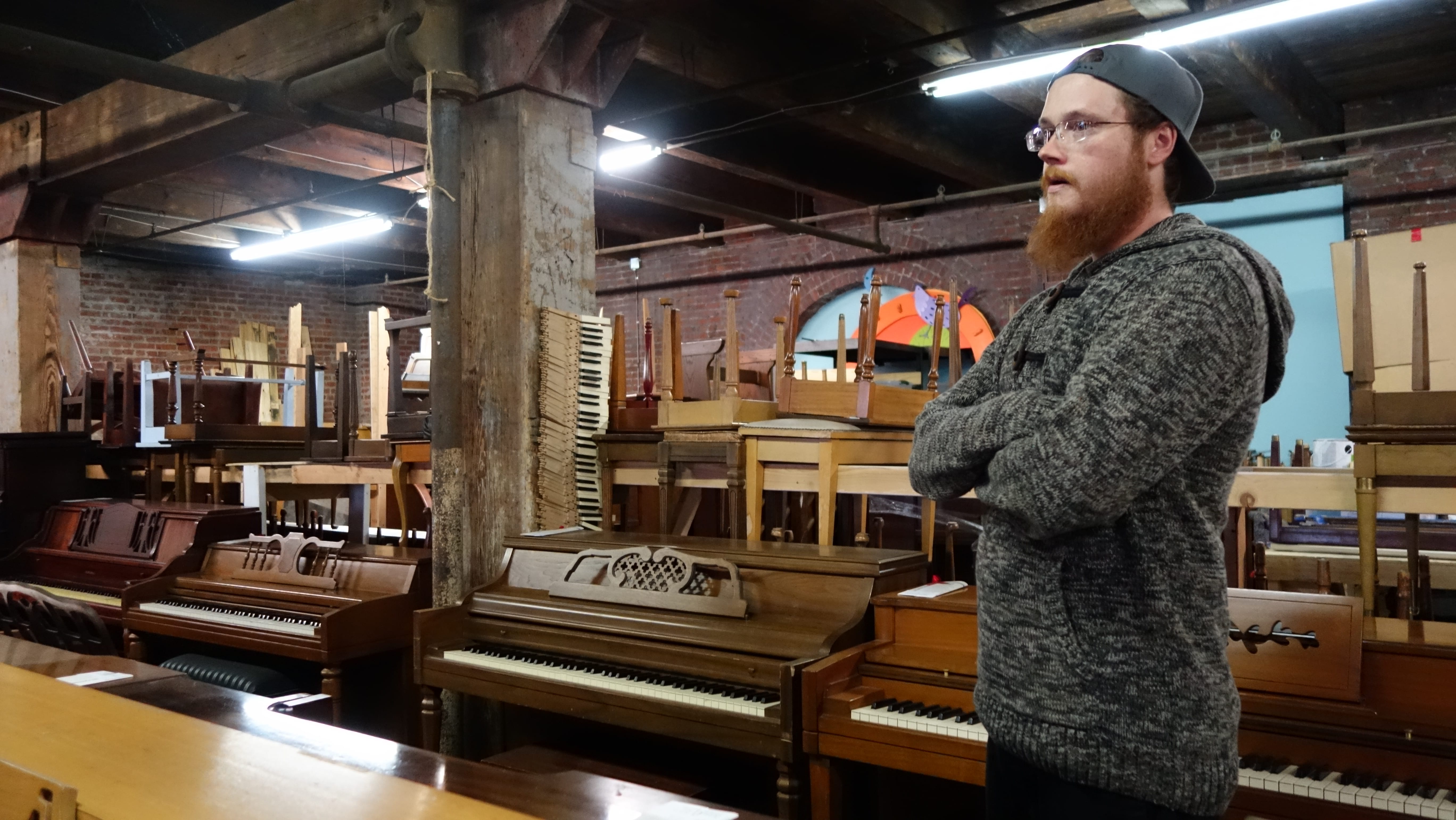 “It’s been everything from, ‘Get this hunk of junk out of here,’ to an elderly lady crying because the piano has been in her family for 109 years,” Kelly said.

Hill estimates that the organization receives 40 percent more pianos than it can sell. The overflow pianos typically end up in one of its  three programs: Placement, Pianos on Parade or the Ellen Project.

Through Placement, the organization selects recipients who get a great piano free of charge. Hill indicated that the guidelines for placement are not rigid, but that the pianos are typically given to low-income families raising dedicated piano students. Potential recipients provide an application, including tax information, pay stubs and a letter of recommendation from a music instructor. The applications are reviewed on a rolling basis – with pianos typically placed once a month in each of the organization’s four markets.

For Kelly, who has delivered many of these pianos throughout Kansas City, this process is something of a job perk.

“Getting to see the kids’ faces light up because they have a piano in their home is amazing,” Kelly said. “Most of these families are under the belief that they would never be able to afford a piano. So being able to help those people is the best part of my job.”

Through its Pianos on Parade program, the organization uses pianos as teaching tools. The pianos are dispatched to elementary schools, along with an outlined curriculum that includes music, mechanics, science, history and visual arts – all using the piano for lessons. Typically, the students at the school will also paint the piano, which is then placed in a public location for the community to use.

Kelly, who makes the rounds in Kansas City to provide maintenance to the public pianos, usually finds members of the community playing them.

“Often times, when I go to check on the pianos, I’ll find people with extra instruments around it, just jamming,” Kelly said.

Through the Ellen Project, pianos are placed in hospitals – typically in wards with children receiving longer-term treatments. Locally, the organization has worked with Children’s Mercy Hospital, The University of Kansas Hospital and the Ronald McDonald House. K4K gives these children an opportunity to paint the piano as a means of art therapy, then invites a local musician in for a special performance on the newly-painted instrument.

While it certainly serves an expressive function, the fact that many of these uses involve painting the pianos is appropriate. Indeed, K4K’s repurposing of these often-forgotten or unwanted instruments, is itself transformative.

And with a seemingly endless supply of donations, the organization intends to continue coaxing new joy out of these old instruments – one dusty piano at a time.
— Dan Calderon is Kansas City native and contributor to Flatland. You can contact him by emailing pdancalderon@gmail.com, or on twitter @dansascity.