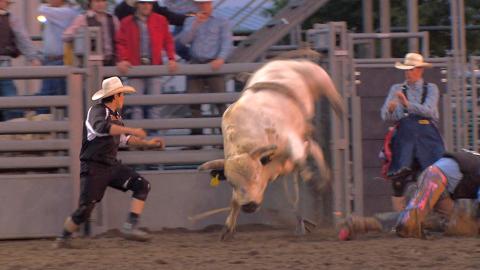 Rodeo bullfighter Rowdy Moon runs in to the rodeo ring after a cowboy is thrown by a bucking bull. (Brian Seifferlein/Harvest Public Media)
Share this story

Rodeo season is getting into full swing, and at most rodeos bull riding is the main event. But when the bull ride ends, the work begins for rodeo bullfighters, and a young bullfighter is making a name in the business by putting himself in the middle of the action.

At bull riding time at the Plum Creek Rodeo in Lexington, Neb., the rodeo corral is under the lights and the sun is a ripe orange in the west. Rowdy Moon bounces on the balls of his feet like a boxer waiting for the match to start.

Rowdy Moon is a rodeo bullfighter with a cowboy’s name from Sargent, Neb. He wears a straw-colored hat, black shorts and football cleats so he can dig in when a cowboy hits the dirt.

A brown bull bursts out of the gate. The rider grips his rope one handed, trying to cling to the bull’s back for eight seconds. The bull bucks and spins – a flurry of hooves and horns. When the cowboy is tossed off, Moon races to distract the angry bull as the rider gets his footing.

“You see the way Rowdy moves in there to keep the bull’s attention?” the rodeo announcer says as he highlights the action for the crowd.  “I’ll tell ya’, wow! Great job, Rowdy Moon.”

The bullfighter’s job is to get in front of the bull after a rider is thrown off so the cowboy can get out of harm’s way. Basically, he spends the night being chased by angry bulls.

“I’ve seen bulls stop at the buzzer. They’re programmed to where they just go out there and do their business and walk off,” Moon said. “But some of them younger bulls, they’re a little hook-y.”

Moon is a bullfighter, but he says a lot of people have the wrong idea about what that means. He’s not a matador and he’s also not a rodeo clown.

“Everybody who goes to a rodeo thinks the bullfighters are clowns,” Moon said.

It used to be that clowns and bullfighters were the same. But Moon doesn’t wear makeup or baggy pants. His job is to get the bull’s attention, not the crowd’s.

Moon is just 18 and a recent high school graduate, though he already has plenty of practice fighting bulls. He started when he was 12. Then he fought bulls at junior high and high school rodeos. Now he fights in the amateur circuit as a summer job with the Boots and Phillips Rodeo Company from Lexington, Neb.

Tom Phillips, one of the company’s owners, says he numbers Moon among the best bullfighters.

“He can see where the bull is going to go before they go there, how it’s going to happen and where to be in time to save the cowboy,” Phillips said.

Phillips says Moon could move on from amateur rodeos to make a career of bullfighting on the pro circuit. He has a bullfighter’s mindset: The cowboy comes first.

“You know, you can really tell who has the mental ability and [who will] give it all they have to get the rider out,” Moon said. “If someone gets hung up I sure try my hardest to get them out of there.”

The occasional horn in the side is part of the territory, but Moon says a short memory helps him stay focused.

“Sometimes when I do take a hookin’ I want to get that out of my mind for the next event,” Moon said. “Steppin’ in there, if you get a good save, it feels awesome. It always feels good when I’m out there.”