Above image credit: Artist Kathy Liao in her downtown studio with a draft (top right) of her artwork for the new KCI terminal. Titled, “Hello and Goodbye,” the piece will feature acrylic on birchwood panels and ceramic tiles. (Photo | Jim Barcus)
Sponsor Message Become a Flatland sponsor

The public art initiative for the new terminal and garage at Kansas City International Airport strikes a chord with artists such as Kathy Liao.

“When the call for artists came out, it really resonated with me,” said Liao, a native of Taiwan who grew up in Los Angeles and moved to Kansas City about eight years ago. “My father traveled back and forth between Taiwan and the United States for a majority of my life, and a large part of my memory consists of Los Angeles International Airport. Since moving to Kansas City, I feel even further apart from my family.”

Liao is one of 28 artists chosen to create artworks for the reconfigured airport, and one of 19 who live in the Kansas City area or have significant ties to Kansas City. Her piece for the new terminal, titled “Hello and Goodbye,” consists of painted wood panels with ceramic insets.

Liao said she feels “incredibly grateful for how inclusive and welcoming the Kansas City artist community was toward me when I first arrived here. And now, with this incredible commission from KCI, I feel like my experience of being here in Kansas City has come full circle.”

The $1.5 billion airport project, currently under construction, will convert KCI to a single-terminal facility. The new terminal and garage are scheduled to open in March 2023. The chosen artworks will be installed prior to that date in various timelines based on the location and complexity of the installation.

Based on the $565 million vertical construction cost, which includes the new parking garage, the city’s One Percent for Art program calls for about $5.65 million to fund public art at the reconfigured airport.

This is the largest public art project in Kansas City history, an enormous undertaking with countless moving parts. The endeavor has unfolded fairly smoothly, but there have been a few bumps along the way.

Leo Villareal’s “Fountain (KCI)” sculpture will replace Nassia Inglessis’ “Fountain of Resonance” in the terminal. Inglessis cited health circumstances beyond her control in her decision to withdraw from the project.

Artist Molly Kaderka was unable to complete her project and was replaced by artist Linda Lighton of Kansas City. Lighton told me she had been unable to obtain all the tile setters she wanted for her project, which portrays flowers and insects of the Great Plains painted on tiles. She blamed the tile setter shortage on a crimp in the supply of mullite, a rare silicate material.

Lighton had to resort to smaller kiln loads, which forced her to work longer hours in order to stay on schedule. But she’s not complaining.

The piece being created by Israel Alejandro Garcia Garcia, titled “Diaspora No. 1,” is multilayered on multiple levels. The raw materials include dolls, photographs, his father’s resident alien card, and a pair of migrant slippers made from a Mexican blanket. Prints of the objects, and in some cases the objects themselves, will be attached to a plexiglass “canvas.”

“Basically, it’s a conversation,” said Garcia, who was born in Mexico and raised in Los Angeles before moving to Kansas City. “I wanted to have a conversation that had to do with race relations. What are the products of White privilege? How does not having that privilege take us, the non-Whites, down a different path altogether? How do our lives differ and how do they parallel each other?”

The non-White elements in Garcia’s piece include objects relating to Black, Hispanic and Indigenous people.

Garcia discovered the slippers when he hiked the 2,000-mile length of the U.S.-Mexico border from east to west in 2018, the year he attained U.S. citizenship.

“These are slippers that migrants would put on their shoes in order to not leave a footprint in the desert,” he said. “It prevented them from being detected as they crossed the U.S.-Mexico border.”

Garcia noted that he could not risk hiking along the border during the years he lived the “shadow” life of an undocumented alien. “I’ve come full circle. I finished my journey where my journey began.”

Kwanza Humphrey’s artwork for the new terminal will be five portraits of five Kansas Citians he knows and admires.

“These are some of the people I have gravitated toward, that I think represent various aspects of what it means to live here in Kansas City,” Humphrey said. “That’s what I’m trying to convey to visitors.”

One of Humphrey’s portraits will portray Jose Faus, a native of Bogota, Colombia, who is well known for the community murals he paints in the Kansas City area.

“Jose is a renaissance man here in Kansas City,” Humphrey said. “I’ve captured him painting the mural down in the River Market. He’s an activist and a poet. I think of Jose as one of those people for whom Kansas City represents a chance to pursue various avenues and opportunities, especially in the creative arts, to do what’s in your heart and what you love.” 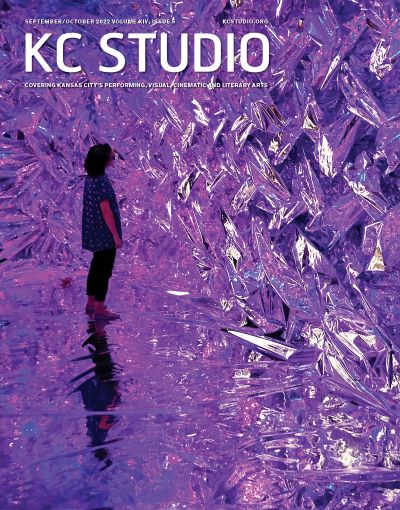 Photographer John Hans likes to have his wife drive him around so he can scout out interesting things to take pictures of. Hans was on such an excursion several years ago when he caught sight of a tetrahedron wind indicator at Excelsior Springs Memorial Airport. Under a blue sky etched with fluffy clouds, the tetrahedron stood over a flock of yellow cone markers.

“All of a sudden, there’s that,” Hans recalled. “What the heck is that? I can’t help from stopping and taking a photo of something like that. It was just a crazy thing to see, especially at the angle I shot it at.”

Hans knew he wanted to submit that imagery when the call went out for art to line the walls of the new terminal. “I thought to myself, this is perfect. It is a Kansas City area location, and it depicts an aeronautical part of it. And it’s just unusual.”

Hans’ photography will be presented as three archival digital prints. “I think Kansas City is going to be proud of what I and the other artists are putting on the wall,” he said. “It’s going to show that Kansas City has a great artistic community here.”

The artists were selected by multiple panels to ensure diversity and inclusivity, and the art pieces were submitted for approval by the city’s Municipal Art Commission. Nine of 28 total artist contracts also required City Council approval.

The 19 artworks by local or locally connected artists chosen in the third round of commissions will be installed in departure lounges in Concourses A and B, at a commissioned budget of $20,000 each.

“This will be in the permanent collection at Kansas City International Airport,” said Holly Hayden, a consulting artist for KCI public art on behalf of Paslay Management Group (PMG). “When someone lands in Kansas City for the first time and steps into the new terminal, they will get a little taste of everything we have to offer in the city. That’s going to make them want to come into the city, visit our museums, go to the galleries, eat at our local restaurants, shop at our local stores, buy a Kansas City souvenir, and remember that this was a cool experience.”

Joining them is internationally renowned artist Nick Cave, a Kansas City Art Institute alum raised in Fulton, Missouri, who was one of four artists selected in the first round. His $1 million commission, titled “The Air Up There,” is a kinetic sculpture of colorful wind spinners for the Check-In Hall Ceiling.