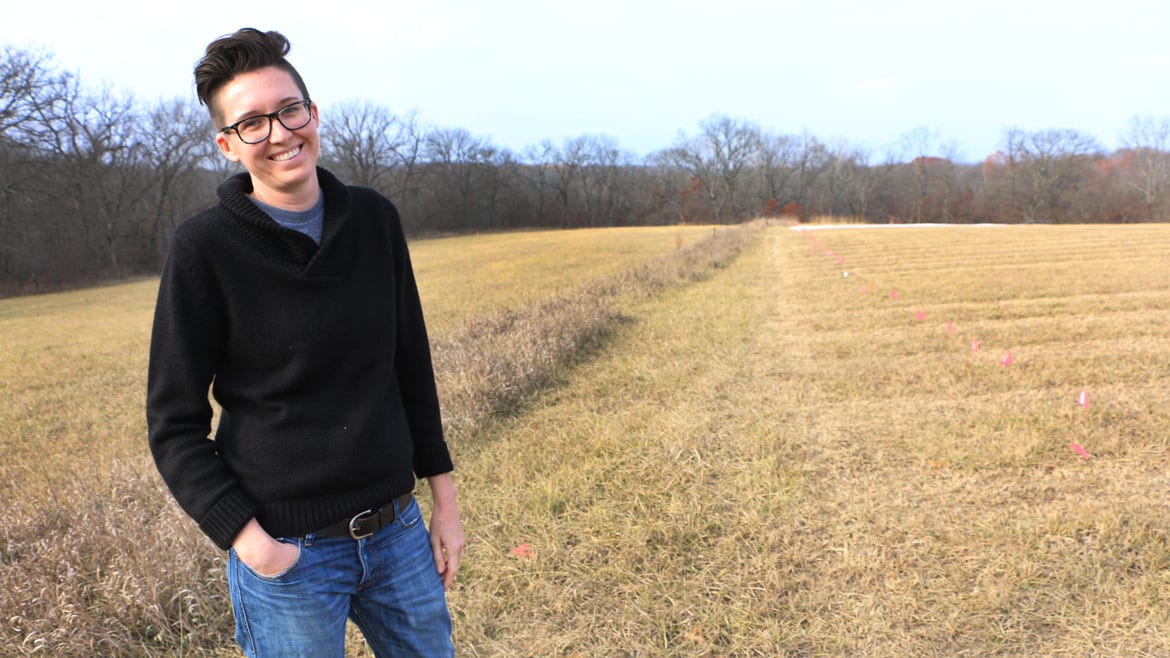 Kate Johnson is using Kickstarter to raise money for her new farm, which she hopes to have operational by spring. (photo by Caitlin Cress/Hale Center for Journalism)
Share this story

When Kate Johnson stepped out of the car on the property in Easton, Kansas, that would become her farm, she knew she was home.

After a yearlong search for the perfect land, this was it.

“Even just the feeling driving up felt different than all of the other places I had seen,” she said.

Johnson said she instantly could envision what this plot of land would look like as her farm: the Roots, Fruits and Greens Farm.

“I was seeing (it) in my head walking around the fields,” she said. “I just knew where the chicken coops were going to be and where the vegetable field would be. It was really pretty wonderful.”

Johnson bought this perfect farm over the summer and plans to be operational by the spring. She used her savings on a down payment, so she’s using non-traditional means to raise the money needed.

Instead of getting a loan through a bank or through the USDA’s Farm Service Agency, Johnson is running a Kickstarter campaign. She hopes the crowdfunding platform will raise $35,000 to purchase the plants, animals and equipment she needs.

On Tuesday, the campaign had raised $12,298 from 72 backers. Like all Kickstarters, Johnson will only receive the money if her funding goal is met by her deadline: Jan. 7 at 2 p.m.

And while, lots of local farmers rely on farmers markets and CSAs to make ends meet, Johnson has a different idea.

She wants to turn her farm into a corporate retreat space. She’s planning to build a large barn with a comfortable meeting table and all the necessary tech.

When brainstorming ways to fund her farm, Johnson said crowdfunding made the most sense.

“What I’m doing is growing food for the community,” she said, “and to have the community help me to grow the farm I think was really a nice … circular arrangement.”

Johnson does know many of her funders so far, but not all of them, and she said that getting contributions from complete strangers has been a wonderful surprise.

Backers include college friends, old teammates from middle school soccer, and, her most generous backer to-date: her dad.

Johnson said her dad donated $1,000 to purchase a tiller, which she says is the most important piece of farm equipment.

Dad’s donation is especially meaningful when you consider that he doesn’t typically eat vegetables, Johnson said.

It was Johnson’s own hard work, however, that began to change her father’s mind. Johnson’s mother once prepared a salad for her husband using lettuce Johnson had grown.

“He called me, in the middle of dinner, and said, ‘I didn’t know this is what lettuce could taste like,” Johnson said. “It’s that sort of experience that I like helping people to have.”

Backers of Johnson’s campaign will have that experience. It’s common on crowdfunding platforms to offer rewards for pledging, and this is no exception. Backers from the $150 level and up will receive actual products from Roots, Fruits and Greens: honey, fruit, jam, vegetables or eggs, for example.

Johnson’s most excited about the greens she will grow on her farm.

“I love growing greens, which is crazy because harvest takes so long,” she said. “It is a really labor-intensive crop, but I’m a sucker for arugula.”

Not your traditional farmer

Johnson doesn’t fit the stereotypical farmer mold in a lot of ways. She’s single; she’s female; she’s young; she didn’t grow up in the agricultural community.

In fact, Johnson didn’t begin farming until 2011. Her first farming job was for Stephanie Thomas at Spring Creek Farm in Baldwin City, Kansas.

Johnson applied to work for Thomas through the Growing Growers apprenticeship program. Apprentices in the program receive hands-on training and classroom education about all topics farming: scheduling planting, cost management, tractor use and organic pest control, among others.

When Johnson applied, she had no farming experience. Thomas said her application still stood out, especially with her food service experience: “You could tell that she had respect for good food,” Thomas said.

“Kate was fabulous because she loved every aspect of it,” she said. “She was the cream of the crop. There are people every year that stand out. Kate stands out in a chunk of years, actually.”

While at Spring Creek, Johnson did a little bit of everything: planting, harvesting, watering chickens, delivering CSA boxes and setting up irrigation.

Thomas said that everyone who comes through the apprenticeship program does so because they want to make agriculture their career. Some will go into farm management, but some, like Johnson, will own their own farm.

Thomas is not surprised that Johnson is taking the leap so quickly.

“Other people that have trained (with me) don’t have the desire to homestead and have their own farm,” she said. “I think it’s amazing that she’s taking on this big of a project, but I’m not surprised because she’s really capable of it.”

Johnson counts her experience at Spring Creek as an integral part of her farm training, but said she still has a lot to learn.

“I’ve learned from some really great farmers,” she said. “I’m constantly reading about farming and attending conferences and trying to gain all of the information I can. I think until you’re running your own farm and really managing every aspect of day-to-day operations, I just don’t know that you get that full understanding.”

Jumping in with both feet seems like a natural next step, Johnson said.

She’s planning to start small and knows that there is a lot of risk involved. This coming growing season, she will have three-quarters of an acre of vegetable production, 20 fruit trees and six pecan trees.

“That’s the scale I think I can start at and maintain and grow from there,” she said. “It’s also learning the land and finding out ‘is there a part of the field that will hold water longer?’ Or the back field where I’m currently planting the vegetables, are the deer just going to wreak havoc?

“I’m just wanting to start small enough that that’s not a catastrophic mistake if that happens,” she said.

Contributing to the farming community

Kansas City has a vibrant farming community. Katherine Kelly, executive director of Cultivate KC, a nonprofit that supports urban farming, said Johnson and her farm will be a welcome contribution.

Johnson plans to interact with the existing farming community and bring new people into the fold.

“Thankfully, Stephanie was willing to take a chance on me,” she said. “I had no farming experience at all, so I think it’s important to give that opportunity to others.”

In addition to providing work for the community come harvest time, Johnson also plans to make her farm available for community space where, for example, Growing Grower classes could be held. Her farm is about an hour from midtown Kansas City, but she hopes that won’t be a problem.

“Getting people up here initially will be harder because of it, but I think I can create an environment that they’ll enjoy, and then they’ll want to come back,” she said.

Getting people to make the drive is essential, in fact, to Johnson’s business plan to host organizations and corporations.

“The idea is that they could all come out here and work in the field in the morning, harvest food, and we’ll all eat lunch together,” she said. Meetings could happen in the afternoon.

“I think a lot of companies like to do off-site meetings,” she said, “and being outside, having your hands in the soil, makes you see the world in a different way.”

An additional part of Johnson’s business plan is to sell to Kansas City and Lawrence, Kansas, restaurants. She has many local restaurant connections, including at Union Station’s Pierpont’s, where she’s currently a server.

Matt Barnes, the restaurant’s executive chef, plans to buy from Johnson as soon as she has product to sell.

She also has connections to Rye, Bluestem, Jax Fish House, Aixois and Novel.

Barnes has previously purchased microgreens from Johnson, which she grew in the second bedroom of her midtown apartment.

“Just judging by that, it’s been very good quality stuff and she seems to be very driven, so I look forward to what she puts out,” he said.

Barnes said the farming community is Kansas City is young and still has lots of room to grow. He thinks Johnson can elevate herself to premier status in the community.

Plans for the future

On a recent December visit, Johnson’s farm was pretty bare. Obviously, winter is not prime planting season, but she does have shallots and garlic in the ground. Everything at the farm — save Johnson’s house, which is yellow — is the same steely blue-gray color: the sky, the pond, the leafless trees, the worn outbuildings.

Her vision of what the land will look like in a few years, though, is colorful: she will have, among many other things, quinoa, Jerusalem artichokes, sunflowers, chickens and, of course, her beloved greens.

Walking with Johnson across the farm, her excitement is easy to see. She turns 30 on Jan. 3, a few days before her Kickstarter deadline. She will be in North Carolina with friends and family to celebrate, but being fully funded would obviously be the ultimate birthday wish come true.

“I think that, for most farmers, the dream is not to work for someone else,” she said. “It’s to have a place of your own.”