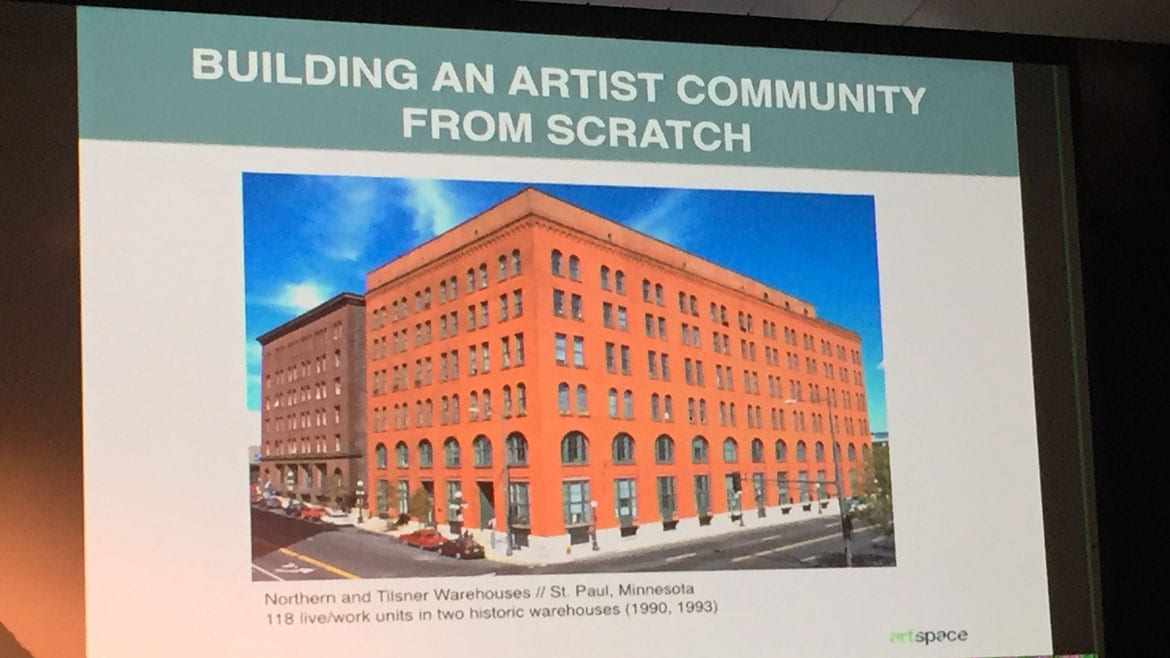 Artspace, a nonprofit real estate organization that aims to develop affordable live/work spaces for artists of all kinds, is in the midst of a preliminary feasibility study to determine if and how development could happen in KC.

Megan Crigger, the director of creative services for KCMO, said the city is interested in the ways expanding artistic opportunity can exist alongside more general city planning goals.

“The city is certainly interested in various approaches for redevelopment, particularly as a catalyst for (change in) neighborhoods or industrial areas,” she said. “This initial visit by Artspace is really just to do a broad assessment of the city and potential creative space development and, in this case, live/work space for artists and businesses and arts organizations.”

KCMO paid $15,000 for Artspace’s consulting fee, Crigger said. The report that will result from this fee and the Artspace visit, which lasted two days, she said, will be shared with community members and other real estate developers. An eventual project in KC could use Artspace’s services but may also happen independently of the nonprofit, she said.

Artspace and the city hosted a town hall meeting Wednesday night at the Plaza branch of the Kansas City Public Library. Crigger said the goal of the meeting was to get feedback and ideas from artists and residents regarding the development of live/work spaces.

He said this project was conceived to prevent artists from being gentrified out of developing areas. Artspace achieves this, he said, by maintaining ownership of the buildings after construction is completed, which allows the organization to offer affordable rent prices.

Close said that the addition of these buildings in 1990 and 1993 were part of an economic revitalization of the downtown area: Since the construction was completed, the area has seen the addition of a busy farmers market, a new baseball stadium for the St. Paul Saints and a thriving light rail.

Light rails and other forms of public transit were especially prevalent in Close’s presentation, which covered other successful Artspace projects in New York City; Seattle and Santa Cruz, California.

“We like to do projects that contribute to the livability of neighborhoods, and we just love transit-oriented developments,” Close said.

Since we underpay our artists, he said, many artists do not have cars, so housing near public transit is essential.

In light of the ongoing streetcar construction in downtown KC, it seems obvious that the city may be looking to aim Artspace development near the streetcar line, which will initially run on Main Street from City Market to Crown Center.

Crigger said that while the Crossroads, an existing arts district that lies near the streetcar, is a possibility for this arts development, so are many other neighborhoods.

“When they say transit-oriented districts,” Crigger said, “it’s not necessarily the streetcar. It’s really looking at multiple modes of transportation, which could be the bus line.”

Artists present at the Wednesday meeting suggested that Artspace development go basically anywhere but the Crossroads district. There were several supporters for the Marlborough neighborhood in south Kansas City. Ivanhoe, a neighborhood east of Troost in Midtown, was also suggested, as was a redevelopment of the Kemper Arena.

“As creatives, start to get excited, get creative friends on this soul train here and start advocating for this now. If we want to see it moving as fast as we want, it’s up to us to be advocates,” Bill Drummond, local artist, said of live/work art spaces.

Wendy Holmes, Artspace’s senior vice president of consulting and strategic partnerships, said location for the project will be chosen in conjunction with the city and interested artists. Close said supporting an already existing city agenda has led to success in the past. He listed affordable housing, retaining young people, historic preservation and bringing vacant sites back on tax rolls as examples of city agendas.

“We look for a location in the community where it will have the most beneficial impact,” Close said. “ We don’t just come in and say, ‘Oh, we’re just going to put the project right here because that’s where it belongs.’ We want to know where people think it can have the most impact, and that’s where we will try to do it.”

According to Close and Holmes, Crigger took them on a tour of the city that covered the Historic Northeast, the West Bottoms, 18th & Vine and a drive down Main Street from downtown to about 39th Street.

Crigger said that the two-hour tour she gave the Artspace executives was designed to show them as much of the city as possible in a tight timeframe.

“We went to the outermost perimeters that was physically possible,” she said. “Quite frankly, we ran an hour over, so we really packed in a lot.”

While it’s not certain that KC will use Artspace’s services, the artists in the room Wednesday evening seemed to be generally supportive.

Bill Drummond, a local glass etcher, was especially outspoken in support of the project.

“One of the major advantages is that the city has self-identified that culture is important,” Drummond said, referring to KCMO’s new office of culture and creative services. “In other cities, you may be rowing against the current. In this city, the current is with us, and I think we should take advantage of that. As creatives, start to get excited, get creative friends on this soul train here and start advocating for this now. If we want to see it moving as fast as we want, it’s up to us to be advocates.”

Even if a potential Artspace project was completed at lightning speed, Holmes said the development — including site identification, acquisition and construction — would not be completed until 2018.

Part of the delay, she indicated, is because of the funding nature of Artspace projects. Artspace developments are funded through public funding sources like those for affordable housing, economic development, historic preservation and cultural facility development, according to the organization’s website. The nonprofit also solicits donations from private sources.

Close said site location is determined, in part, due to proximity to supermarkets, schools and hospitals. This proximity can affect tax credit scores, which would then affect how the project is funded.

The Artspace report on Kansas City, Crigger said, will include around six potential sites for arts-focused development. These sites will then be shared with the community for feedback.

“(The report is) going to share multiple sites and pros and cons,” she said. “The way Artspace works, it’s really grassroots, bottom-up. It’s ultimately going to be informed by the community in terms of what works best for Kansas City.”