Kansas Can Win It All. Here Are Six Things That Need to Happen First.

The Jayhawks' Keys to Winning the Final Four 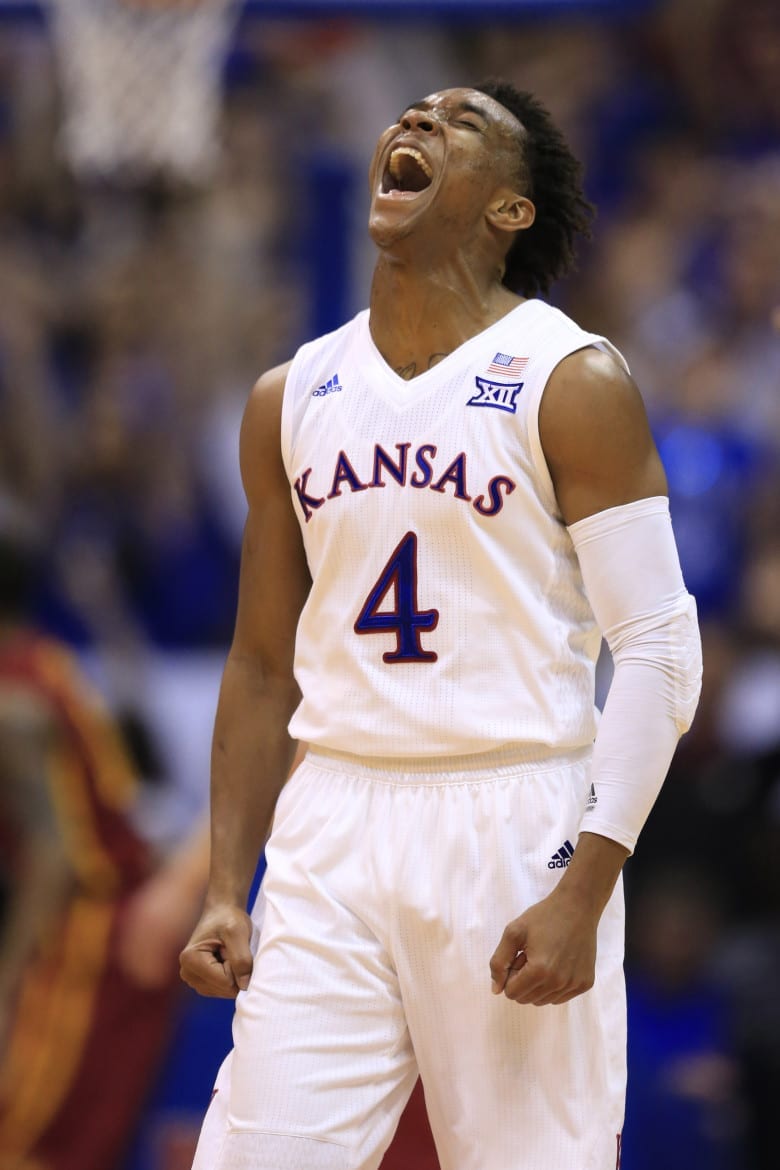 Stats are big this time of year, and you can crunch numbers forever. But as Kansas begins their run for the Final Four against Austin Peay this afternoon, one set of digits might matter most. In the spirit of gambling-obsessed Brent Musburger we’ll note that Vegas oddsmakers have put KU as a 9-2 favorite to win it all.

Which is, you know, fine. It’s moderately reassuring. But they don’t call this time of year “March Sanity” or “March Everything Goes According to Plan.” Crazy things happen.

Besides, KU has the toughest potential second-round opponent of the four top seeds. The Jayhawks, assuming they get past Austin Peay today, will either face Connecticut or Colorado. Ouch.

At least they’ll be close to home in Des Moines. If KU can win their two games in Iowa, they advance to Louisville for the Sweet 16 and Elite Eight. That, too, is not certain – no matter what the Vegas bookies say. As great as KU coach Bill Self has been, his teams have had some Second Round tumbles. Just ask Northern Iowa, Bradley, or Bucknell. If KU is to avoid a shocker and take the title, we have six keys to their success.

Let’s not get ahead of ourselves. Seriously. A 16-seed has never beat a 1-seed, and that’s not likely to change this year when KU plays the Governors.

Make no mistake, though. The gap between the top and bottom of the bracket is shrinking. According to ESPN, in the last four years we’ve seen four games between a 16-seed and 1-seed that were decided by single digits. KU can’t let the Governors stay close and have hope.

In fairness, they probably won’t. If you want a crazy, shock-your-friends-with-your-basketball genius pick, take No. 16 Hampton over No. 1 Virginia. At the very least, the Pirates’ up-tempo style should keep it interesting against the plodding Cavaliers. Then be smart, though, and take Michigan State to win the region. 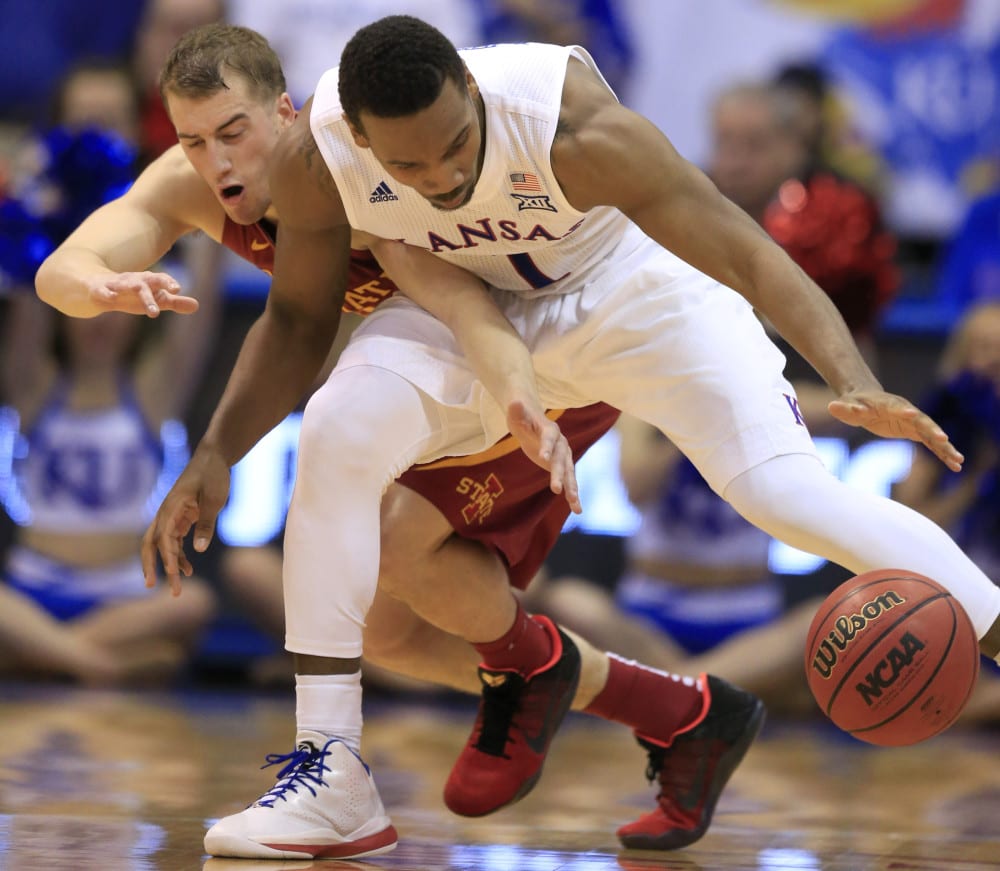 Picking Tom Izzo’s Spartan team, however, doesn’t mean you should root for them. Self has a winning record against nearly every coach in America, but Izzo gives him fits. Self is 5-7 lifetime against him, including a mark of 2-4 since Bill got to KU. Those four losses, of course, include a 79-73 Spartans win earlier this season behind the dazzling, triple-double performance of senior guard Denzel Valentine. Yes, KU can beat any team in the country, but it will be a much easier path to the title without a certain Spartan in the way.

3. Perry Ellis Has To Be a Star

Perry Ellis, as a senior, is an anomaly in an era of one-and-done players. Unfortunately for him, he also has less hair than most 35-year-olds. Maybe that’s why Ellis has been the target of relentless, mostly good-natured ribbing in the Twtter-verse.

Or maybe it’s because his game looks as old as his hair does. Ellis scores with craft and guile, using an array of layups and hook shots more suited to a dads-over-30 weekend pickup game than 21st century NCAA basketball. If he has a weakness, it’s his weakness. Relatively speaking, Ellis isn’t as big as some of the bruisers he’ll face down the road. If he can stay out of foul trouble, and score around his regular season average of 16-plus points per game, the Jayhawks will already be halfway to Houston.

After three straight road losses during the Big XXII season, KU was in trouble. Following the particularly dispiriting loss to Oklahoma State, Self called a players-only meeting, and took the highly unusual step of asking his four starters – Ellis, Wayne Selden Jr., Devonté Graham, and Frank Mason III – who should play in the fifth slot. Lucas was their choice, and the season was suddenly saved. With rebounding and defense that frees Ellis to score, Lucas turned the team around. If he keeps playing well, the ‘Hawks are in good shape.

If he doesn’t play well, or if Ellis gets into foul trouble, expect to see big minutes from freshman Carlton Bragg Jr. Bragg only averaged 3.7 points and 2.3 boards in the regular season, but he’s big and strong with surprising touch way from the bucket. Cheick Diallo may also see time off the bench. He’s a great raw talent, probably NBA-bound, but has mostly been a shotblocker so far at KU, with 22 regular season swats.

All year, this Kansas team has shown an unfortunate tendency to let their collective foot off the gas pedal. They’ll let teams that are down by double digits back into a game. Now, wearing that big, number-one-overall target printed on their backs, KU can’t afford to let an underdog have hope. A nice, boring 30-point win today would be a great start.

Guard play is always key to winning in March. This year is no different, especially in the South bracket where KU will see a ton of talent. Like Melo Trimble, for instance, of the No. 5 seeded Maryland Terrapins.

Stopping Trimble, and those like him, first will take getting continued consistency from Frank Mason III. He slumped for a few weeks after the overtime win against Oklahoma, but the bulldog finally seems healthy again. He’s also playing angry after getting dissed by Fran Frachilla.

Next, sophomore Devonté Graham must keep getting better. By far the season’s most improved player, Graham averaged just 5.7 points and 2.8 assists per game as a freshman, but 11.7 points and 3.8 assists as sophomore starter. He got better as the year went on, too, becoming the team’s best threat from beyond the arc, so turning sharpshooter Brannen Greene into an afterthought. His defense has been just as important, going from acceptable to inspired, and leading the Jayhawks in steals. Graham also, not for nothing, won MVP of the Big XII tourney. Not bad for a kid who once committed to play at Appalachian State.

Finally, there is the mystery of Wayne Selden Jr. There’s no more talented, no more mercurial player than Wayne Selden Jr. At times, he can be absolutely unstoppable. As he was in KU’s overtime win against Kentucky earlier this year, when Selden slashed and bombed his way to career-high 33 points. Or against Baylor in the Big XXII tourney when he ripped of a ridiculous, GIF-worthy dunk, prompting an even more GIF-worthy, instantly viral reaction from his uncle in the stands.

For long stretches, though, Selden has been invisible. He hangs out on the perimeter and gets disinterested if he misses a few shots. That can’t happen in the NCAA’s. If Wayne keeps in his head in the game, plays tough defense, and scores his average, KU will be in good shape. If, as can happen in March, Selden gets hot, Kansas is a solid bet to cut the nets.