How The Chiefs Can Win The Super Bowl 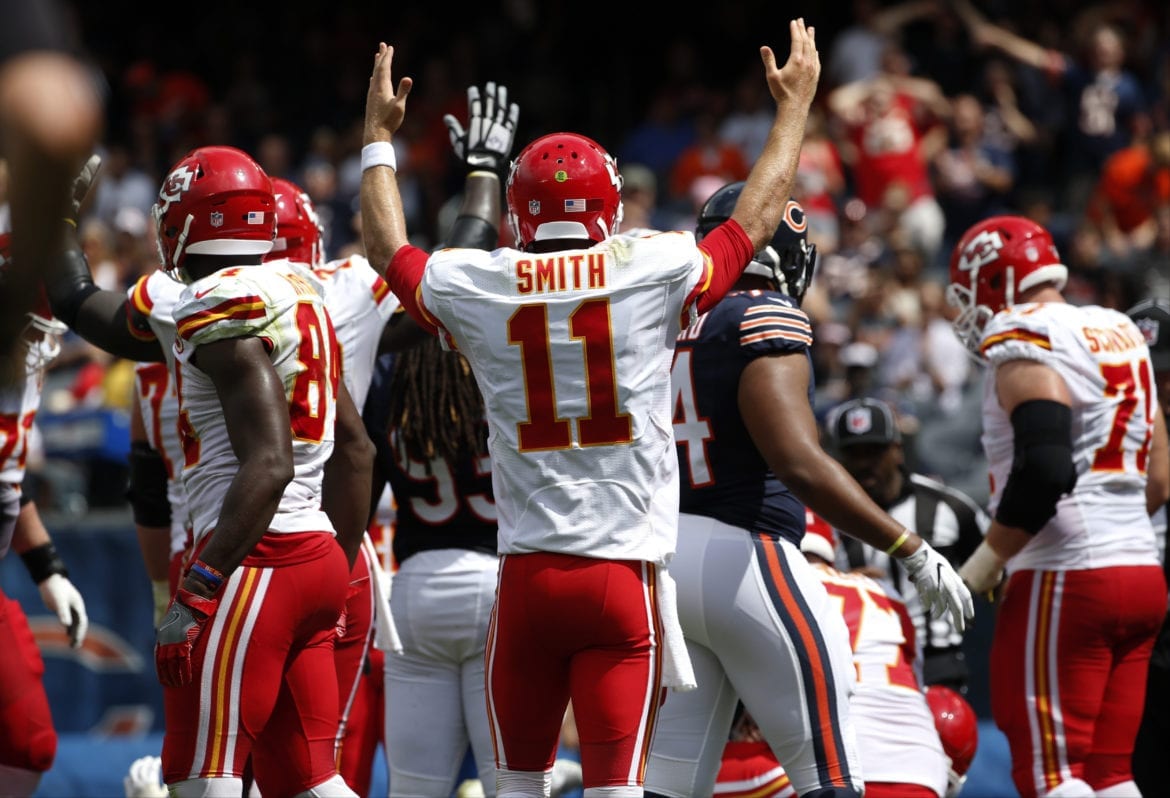 In this Aug. 27, 2016, file photo, Kansas City Chiefs quarterback Alex Smith (11) celebrates a touchdown during the first half of an NFL preseason football game against the Chicago Bears, in Chicago. The longest regular-season win streak in the NFL these days belongs not to the Super Bowl champion Denver Broncos, the NFC champion Carolina Panthers or the perennial-contending New England Patriots. It belongs to the Kansas City Chiefs. (Photo: Nam Y. Huh | AP)
Share this story

Last year, the Kansas City Chiefs topped the Texans 30-0 for KC’s first postseason win in 22 years. True, KC lost to New England the next week, but the Houston win was still a watershed. On Sunday, the club will try to build on that success, beginning its most anticipated season since Jeff Gillooly was in the news. To get you ready, we’ve got a list of things the team can do to win Super Bowl LI.

Don’t Get Too Excited About Jamaal Charles

Sure, it’d be cool if Charles would stay healthy. He probably won’t. Yes, Adrian Peterson was able to bounce back from a torn ACL, but not everyone is AP. Credit the club for being smart. Jamaal won’t start against the Chargers on Sunday and is likely to see limited snaps for the season’s first few weeks. That could help. So will the talented backs behind him — Spencer Ware, Charcandrick West and Knile Davis. Fear not. The club went 11-1 without Charles in 2015, with West and Ware combining for 1,037 yards.

Stability in the Trenches

Charles or not, the Chiefs offense looks truly dynamic for the first time in forever. A big part of that is a new stability on the offensive line. Left tackle Eric Fisher, a former overall No. 1 draft pick, has to be especially solid protecting the blind side of QB Alex Smith, particularly given the four-year $48 million extension that Fisher signed in the off-season.

Last season, the club played only two of its first six games at Arrowhead, then had to play at Wembley in midseason. Rough. This year’s slate looks much friendlier, including a Christmas night home game against the Broncos that’s likely to have huge playoff implications. Obviously, there’s no such thing as an easy schedule in the No Freebies League, as KC’s road games against the Panthers and Steelers will attest. On the whole, though, with meetings against NFC South teams like Tennessee, Jacksonville and Tampa Bay, the team has an easier road than last year.

Eric Berry should be less old

Sure, it’s great to have Berry back in the fold. But players who hold out during training camp often start slow – or, worse, get injured. If Berry could, you know, not do that, it would be very helpful.

The linebacking stalwart is a leader in the locker room as well as on the field. But the whole “on the field” thing is where the team will need him most.

Starting to see a pattern here?

Especially with Houston out for at least the first six games, everyone is talking about how former number one pick Dee Ford needs to step up. True. But watch out for rookie Dadi Nicolas. The sixth-round selection from Virginia Tech looked fantastic in preseason, notching two sacks and a pair of quarterback hurries against the Packers alone. Look for defensive coordinator Bob Sutton to get Dadi more snaps as the season wears on.

The Cornerbacks Should Be Older

Without question, defensive back is this team’s most glaring weakness, especially after not resigning Sean Smith and trading Marcus Cooper to Arizona. As of this writing, the Chiefs have six corners on their roster. Two are rookies. Two, including starter Phillip Gaines, have played only a pair of NFL seasons – and Gaines is coming off a torn ACL. Two, Marcus Peters and Steven Nelson, have played one year. Granted, Peters is a stud. Last season’s Defensive Rookie of the Year, the kid has legit Hall of Fame potential. Seriously, in 2015, he had eight interceptions, broke up 26 passes, forced a fumble and logged 50 tackles. The rest of the unit, though, looks ripe for roasting.

The biggest question mark on offense is at wideout. Jeremy Maclin is the bomb. Beyond that, there’s a serious lack of size. Chris Conley, who just jumped ahead of Albert Wilson on the depth chart, looks like the best bet to complement Mac Lethal. (Note: That’s not really his nickname. But it should be.)

Andy Reid is bad at clock management. Famously so. No, really. To reach that proverbial next level, Reid needs to, you know, not be so bad at that. Which seems unlikely. Therefore, look for KC to lose at least one game this year because of an inelegantly handled two-minute drill. Just pray that the game isn’t their last one.

Fans are going to see a flashier offense, with lots of multiple tight-end sets. But KC’s best weapon at TE, Travis Kelce, is about to have his head turned. In the off-season, the hunky baller shot a dating show, entitled “Catching Kelce,” set to premiere on Oct. 5. The show gathers 50 women for a sexist cattle call – um, that is, a dating competition – to help Kelce find true love or whatever. As soon as it airs, the kid is going to get heretofore unimagined levels of attention for his off-field activities. He can’t let that distract him from what happens on it.

Hey, remember that time that the 49ers chose Colin Kaepernick over Alex Smith? How’d that work out for them?

Smith gets a bad rap, because he doesn’t like throwing the long ball. But the veteran is one of the NFL’s best. He’s a game-manager without the pejorative sense that term usually implies and a dynamic scrambler to boot. With Smith as their starter, the Chiefs are 30-16 – the only stat that matters. Still, Smith needs to occasionally cut loose, especially early in games, to keep defenses honest.

Tom Brady Has to Fall Off a Cliff

Let’s not kid ourselves. Sure, the Chiefs took a big step last year. Sure, it’s great that Peyton Manning has finally retired in Denver, leaving the AFC West wide open. But the road to Super Bowl LI runs through New England – and there might be a stop in Pittsburgh along the way.

Of course, the Chiefs can have a good year without going to the Super Bowl. A record of 10-6 and winning their first AFC West championship since 2010 would be huge. So would reaching an AFC title game. For KC to win the biggest game, though, Tom Brady will have to do more than sit out his first four games due to a deflate-gate suspension. He’ll have to drive off a cliff. And it wouldn’t hurt if Aaron Rodgers, Russell Wilson, Ben Roethlisberger and Derek Carr were with him.

— Hampton Stevens covers the arts and entertainment for regional and national publications. He lives in Kansas City, Missouri, with his beloved pit bull, Ginger. Follow him @HamptonStevens.