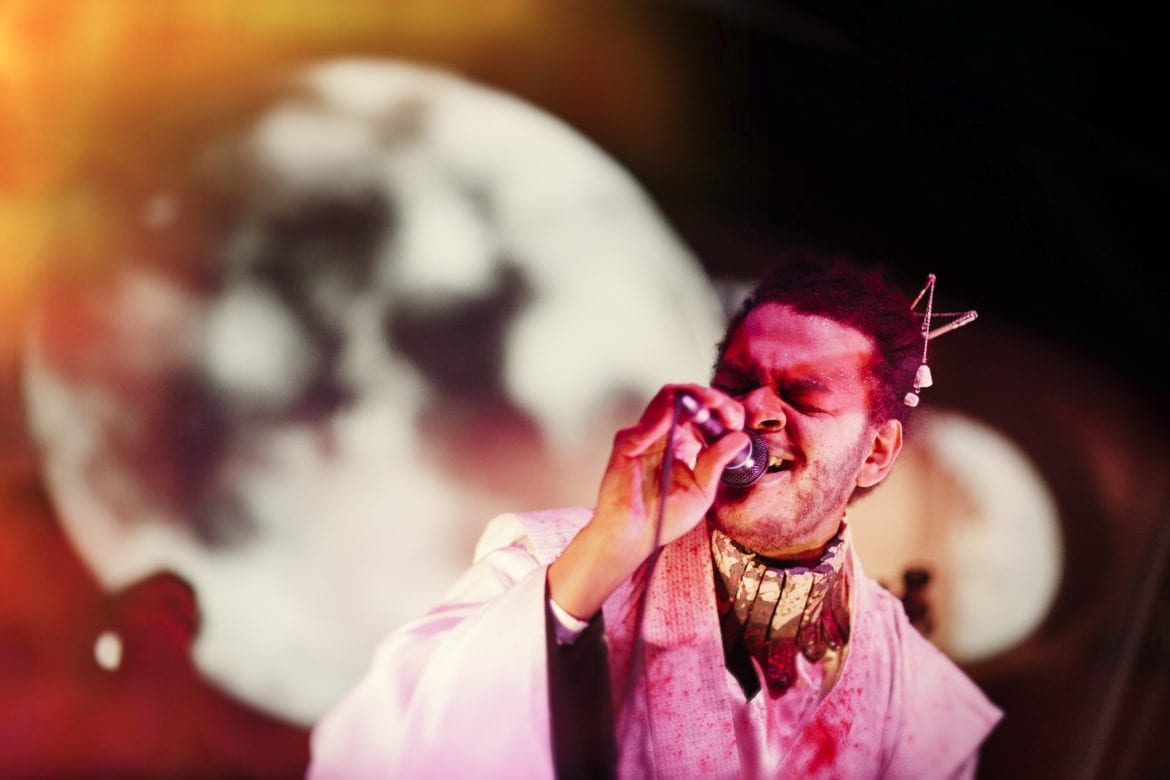 A standing ovation in Helzerg Hall at the Kauffman Center for the Performing Arts Center doesn’t happen every day. It did for local musician/singer Calvin Arsenia at the Center’s fifth anniversary celebration on Sept. 2.

To the dulcet tones of his harp and voice, and accompanied by Jeff Harshbarger, Ryan J. Lee and Clint Ashlock, Arsenia lulled the audience with classics like “Summertime” and “Nature Boy,” along with a few of his own original numbers. The combination of instruments, material and styles was one most audience members had never experienced, but many left as big fans of the tall, stylish, 26-year-old talent, with the strong voice, exceptional skills on various instruments and charming and warm stage presence.

Not just any musician can make a name for himself playing the folk harp. In case you aren’t familiar, producer Ashley Holcroft introduces us to Calvin Arsenia who has captured the attention of audiences with his harp, his passionate vocals and his soulful style. This short feature is part of KCPT’s ongoing coverage of the arts in collaboration with KC Studio Magazine.

Arsenia loved to sing from the time he was a boy. He sang continually at home, in school and at his family church in Olathe. Not surprisingly, he amassed more than 10,000 hours (the magic number for mastery, as we know from Malcolm Gladwell), by about age 7. At 12 he sang a solo at the First Family Church during the seven-day performance of “The Promise” out of Branson. He received classical training at Johnson County Community College and was finally categorized as a baritone, “a baritone with secrets,” as he describes himself.

In addition to singing, Arsenia plays the harp, guitar, piano, banjo, ukulele — his “usual five.” That is, for now — he’s learning the violin. An instrument’s only requirement is that he can sing at the same time (i.e. no brass).

Arsenia’s music can’t be labeled. It includes classical, jazz, folk, rock. The tones of his voice and instruments range from whimsical to soulful, from soft and melodic to moody, arty, cathartic. He has a 3 1/2 octave range, which can go up to five, with an effort. It’s remarkable, but Arsenia says until he was older, he didn’t realize not everyone could sing so naturally, effortlessly. Opera appeals, too; he may pursue additional training in that at some point.

At 16 or so, Arsenia started writing songs, and his performances mix his original offerings with standards. He lists as influences Lauryn Hill and Andrea Bocelli and, like them, has “stories to tell.”  Writing allows him to “facilitate people’s dreams”: it gives him “emotional headspace,” in his term. 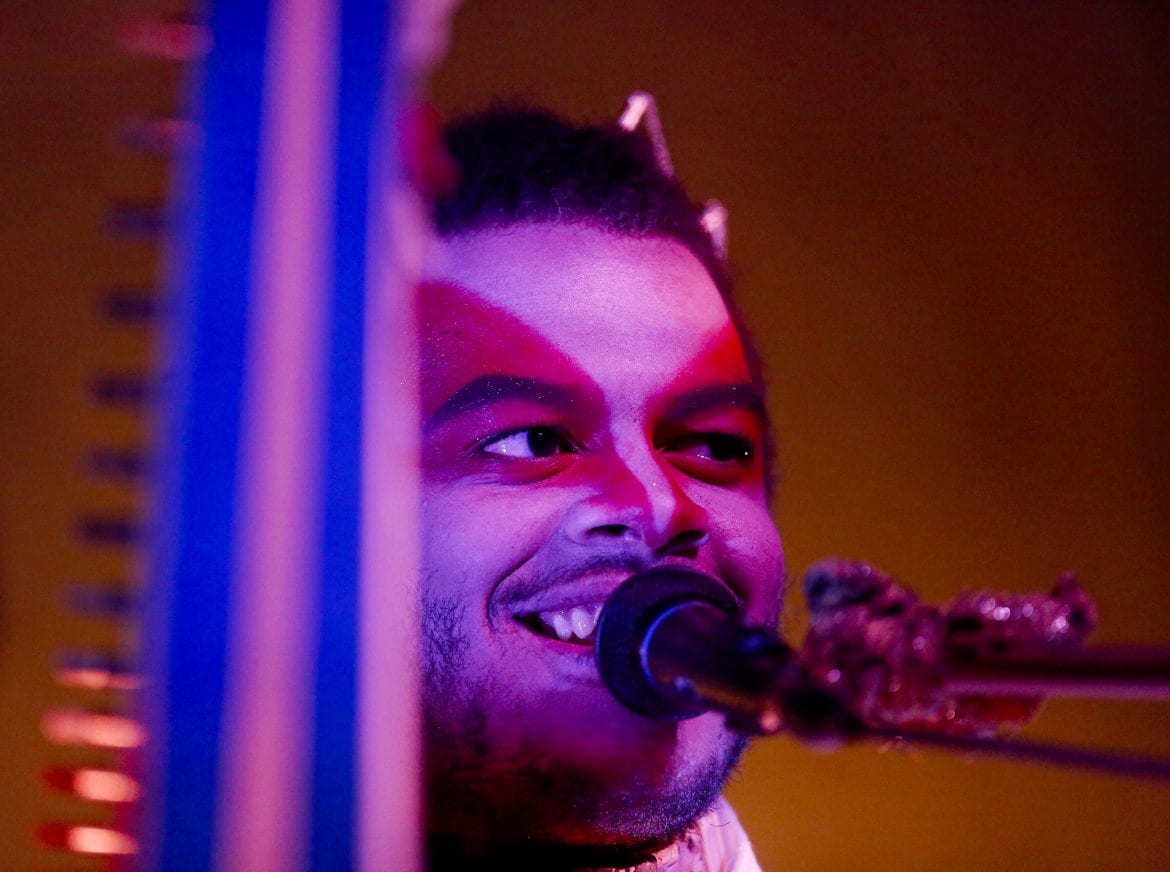 Arsenia’s career really started when he was invited by Life Church in Overland Park to travel to the Edinburgh Fringe Festival in 2010 to provide musical training and assistance. That was his “launch pad.”  There he performed as a “busker,” singing love songs and ballads for two weeks, and was changed forever by the organizers, artists and audiences he encountered. He learned the harp there, studying with a harpist from the Scottish Chamber Orchestra, and he bought a harp on “Gumtree,” the Scottish equivalent of Craig’s List (the only instrument he has actually ever purchased; all others have been given to him). He returned to Edinburgh in 2011, and in 2012 he was invited to introduce his own material and perform solo. He lived with a Polish fashion designer and has since visited Poland.

The restrictions of an artist visa demanded he return home and support himself as an artist for a full year. Since then he has performed steadily, including twice at the Plaza Art Fair, at the PAC, the Folk Alliance, The Living Room, Phillips Hotel, as Hermes in J. Ashley Miller’s “Echosis” techno opera in the East Bottoms and with “Silver: A Noir Ballet” by Evan Lovelace at Union Station last year (a film version may be in the works).

Arsenia plays various private functions and institutions, fully supporting himself in the music field. (The Kauffman’s marketing director, Bess Wallerstein Huff, signed Arsenia on for the Kauffman bash after seeing him perform at a private birthday party.) In addition, he has worked solidly in construction management (his non-music profession).

Arsenia teaches piano, voice, guitar and harp privately and in schools. He’s a French instructor at Oak Lawn Christian Montessori in Shawnee. As if that weren’t enough, he paints and recently had an exhibit of portraits at Codie’s Café and Backroom Gallery in Independence.

Lauren Anderson, local rock singer, is one of the portrait subjects, as are several family members. He also hosts a “tea party” every third Saturday afternoon at Desserterie in Shawnee. He’ll choose your tea; after all, in Edinburgh his group was Calvin Arsenia and the Earls of Grey.

Arsenia’s biggest music event to date occurred in November, with the launch of his new album “Catastrophe” at the new RecordBar. Arsenia said the style is different from his several previous albums, some produced in Scotland, among them, “Prose.” This one is more upbeat and encompasses more rock and jazz. The performance at the launch featured his harp-based “Cardiac” from the Kauffman Center gig, and included Shane Borth and Quixotic along with Coleen Dieker, Jametatone, Reggie Watkins, Teri Quinn, a quartet from Classical Revolution KC and Joe Miquelon, saxophone player formerly of the Elders.

Arsenia hopes to tour the States next year, but ultimately he would like to divide his time between here and Europe, preferably settling in Belgium. He zeroed in on Brussels while traveling through Milan, Paris, Budapest, Venice and even Örebro, Sweden. Along with many musical languages, he has French under his belt. Swedish, not yet.

Currently he lives in the Midtown area. His roommate, best friend and business partner, Chris Dong, is a graphic designer (buenaterra.com), who is active in promoting and marketing him. Dong has to make space for Arsenia’s organ, keyboard, four harps, a violin, a guitar and a bass. So far.

Arsenia sees the personality in each instrument — the “poetry” of the ukulele, the “biography” of the harp, the “essays” of the piano. Some he pushes for “tenacity”; from some he coaxes “gusto.”  From all he finesses a memorable sound.