The Christianity Spectrum: Local Millennials Share How They Do Church 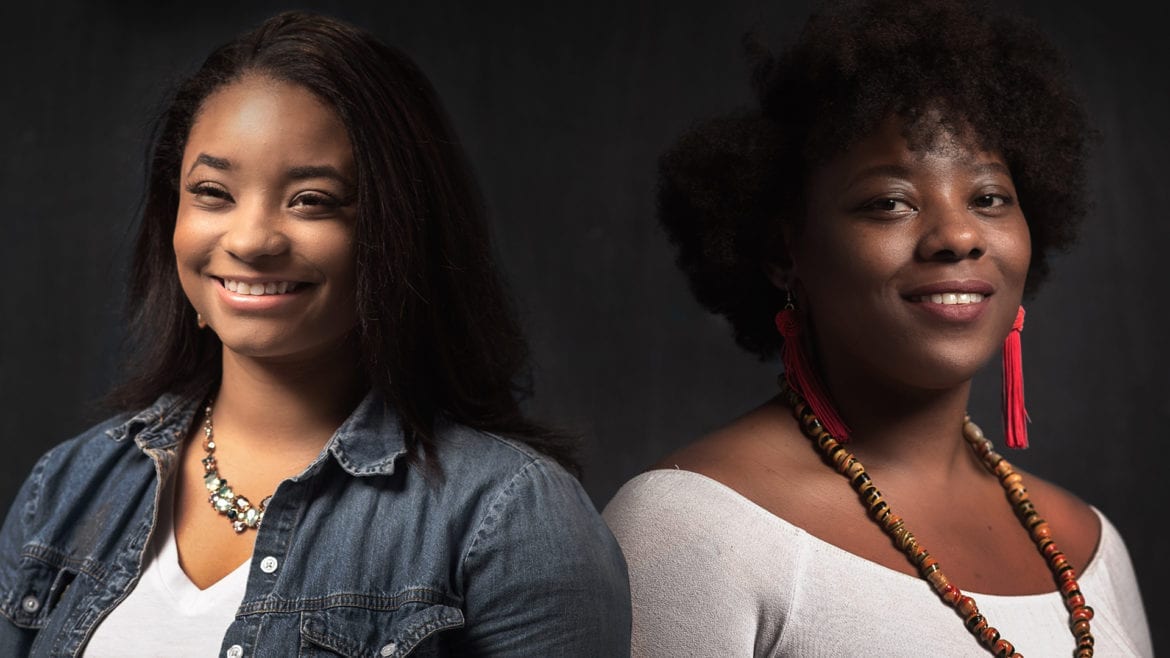 Taylor Hudspeth (left) and Chantell Smith have been thinking about how church finds it way into their lives. (Brad Austin | Flatland)
Share this story

Chantell Smith was sitting on the couch in her apartment flipping through the channels when she saw the news. A gunman had entered a historically black church in Charleston, South Carolina, and killed nine people. She felt defeated. Her cheeks were wet with tears.

“That was the one where I was just like, ‘What is it?’” said Smith, 27. “So many instances where people who look like me were literally just killed in cold blood for no reason at all, and it made me start to question so much.”

Sadness gave way to confusion and then anger. A tragedy 1,000 miles from her home in Kansas City, Missouri, left a residue on her spiritual life. Smith no longer felt safe within the church where she once found refuge.

Millennials (those born in the years 1981 to 1996) are attending church less than their parents’ generation. According to a 2014poll conducted by Christian polling firm, Barna Group, millennials were the least likely generation to value church attendance. Furthermore, 59 percent of millennials who grew up in church have stopped attending.

In searching for the answer to why millennials aren’t physically attending services, Flatland discovered the changing nature of how we do church.

A Changing Culture of Church

Sheffield Family Life Center in Kansas City, Missouri, provides its members with more convenient ways to stay connected with their church even if they can’t attend. Attendees have the option of paying their tithes via text message, and streaming both Sunday and Wednesday services online.

Think of it as Grubhub for your soul.

“The culture of church is changing in the social media age,” said Nicole Hill, associate pastor at Sheffield. “Sometimes people don’t want to leave their home.”

But the streaming of services isn’t necessarily a full-time replacement for attending in person.

For Taylor Hudspeth, 26, watching church online provided her with a way to stay in tune with her church home while she was away at school in Lawrence, Kansas.

“My church was in KC, and my school was in Lawrence, “ said Hudspeth, who attends the World Revival Church in Kansas City, Missouri. “Now, however, I do prefer to be at church over watching online. It’s kind of like going to a Chiefs game instead of watching it. It’s just not the same experience.”

Leslie Dorrough Smith, assistant professor of Religious Studies and chair of the Women’s and Gender Studies Department at Avila University, explains that in recent studies, younger people today still go to church, and that many still speak of religion in a positive way.

“What has changed is what they expect from religion, and what religion expects from them,” Dorrough Smith said.

Jessica Bennett, 44, has attended church in person with her family faithfully for the past seven years. Bennett’s church, Eagle Creek, a growing congregation located in Lee’s Summit, Missouri, is a place where she and her family can comfortably call home. And with her two children a few years shy from adulthood, she’s grateful that Eagle Creek is intentional in reaching people at where they’re at in their lives.

“It was really that they reached our kids. That made it really easy for me and husband to see ourselves there,” Bennett said.

But what if you see yourself in more than one place? Smith, who does not attend church as frequently as she did when she was a child, doesn’t have a regular Sunday pew.

“I mean, I guess I do attend [church], but it’s not what I would consider attending based on how I was raised,” says Smith. She clarifies her point by using her hands to map out on the table the different churches around the city she attends. “I gotta go to this church for worship, this church for word, and this church for fellowship.”

And that’s what works for her. Church-hopping until she finds the right fit.

It’s Not Just About The Word

A big difference between millennials and their parents’ generation may be access to social media at an earlier age. Smith has casually scrolled through her social media and watched portions of a church service by way of her timeline, without even searching.

“Once we have a much larger world dominated by internet and social media, it becomes much harder to assert that one way is the right way concerning religion,” Dorrough-Smith said.

In order to convince people to not just scroll but stay, Bennett believes that churches could be doing a little more to attract more people.

“I think churches are not immune to the fact that you have to earn people’s buy-in in order for them to grow spiritually,” Bennett said.

This self-gratifying motive that Bennett alludes to is similar to an idea discussed in sociologist, Christian Smith’s book, “Soul Searching: The Religious and Spiritual Lives of American Teenagers.”

“What he generally found is that most youth use religion in order to solve personal problems, or to make themselves feel better,” explained Dorrough Smith. “God is sort of like a therapist for them.”

But what if the group you belong to isn’t ready for a therapy session?

Smith recalls when she first began digging up information about her African ancestry and how it caused tons of questions about the faith she was given at birth to sprout up. No longer knowing which label to use to spiritually identify herself, she noticed when she asked questions to Christians, her inquiries were sometimes met with resistance.

“Some believers are really threatened by questions, and I think that’s weird,” Smith said. “If it’s something that you believe, questions should just be seen as a time to educate somebody else.”

Noticing that a portion of her own friends and peers have dropped out from attending church on the regular has sparked conversations within Hudspeth’s own friend groups.

“In conversations that I’ve had with other millennials, it stems from some sort of church hurt,” Hudspeth said. “I get it, because in some churches I’ve been to, I’ve felt judged or like I didn’t fit in.

“I suspect Christianity will just take different forms,” Dorrough Smith said. “It remains very strong today even if you don’t have as many people showing up in a building on Sunday.”