Everybody wants to be Royal 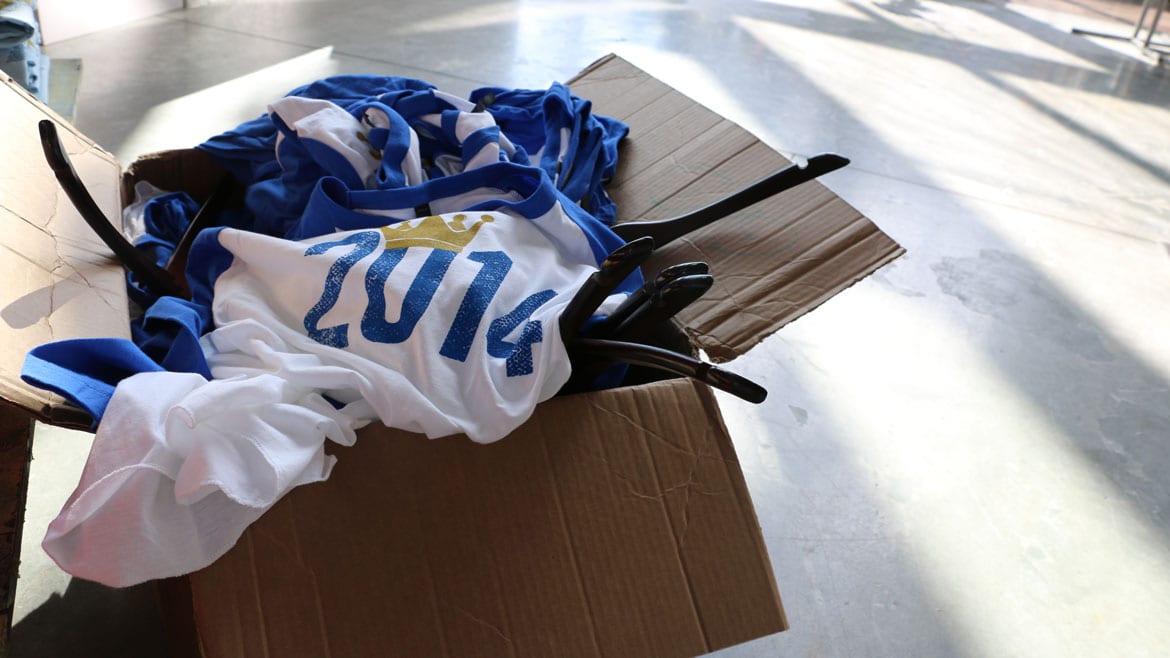 These "2014 crown" T-shirts by Freelance have been selling out continually at the Garment District Boutique in the Power & Light District — the only physical store in KC that sells them. (photo by Caitlin Cress/Hale Center for Journalism)
Share this story

A woman in her 20s walks into the Garment District Boutique in the Power & Light District around lunchtime on Friday. She glances around before tentatively asking “Do you guys have more sizes in yet?”

She’s looking at a box on the floor, overflowing with dozens of the same T-shirt: a baseball raglan featuring a crowned “2014.” The logo is an apt illustration of #TaketheCrown fever — city-wide excitement as the Royals head to their first World Series in 29 years.

“It seems like every week, what was a big order, the next week is a tiny order,” Mark Denton, Freelance

The shirt in question was designed and produced by Freelance, who has been producing T-shirts on a small scale in Kansas City for the past four or five years, designer Mark Denton said. This summer, the company began experimenting with some Kansas City–inspired designs, including a variety of “crown” shirts. It wasn’t until the Royals began their historical sweep of both playoffs series that the shirts really began taking off.

Now, Freelance can’t keep the shirts on the shelves.

“I don’t even have my head around the numbers at this point because we’ve been moving at such a fast pace,” Denton said.

Denton is quick to point out that his designs aren’t “Royals” shirts, meaning they are not licensed.

“Obviously we can’t call this a Royals shirt. It’s a crown on a blue T-shirt, and, in this market, that means something,” he said.

This spare design aesthetic seems to be in demand: several local businesses have reached out to Denton looking to buy the shirts wholesale. He had to say no.

“If we were bigger and our costs were lower… with the quantities we’re doing it’s really difficult to be profitable in a wholesale situation,” he said.

Right now, the Garment District Boutique is the only physical store where fans can score a Freelance tee. Store operations manager Geneé Laws said she opened the store a few minutes early this morning to serve a line that went around the block.

“They’ve just been flying off the shelves,” she said, in between hanging a box of the baseball raglans. “We can’t keep them in stock.”

Shirts can also be purchased at freelanceclothing.com

Some of the success of Freelance can be attributed to American Idol 2008 winner David Cook, who is from Blue Springs, Missouri.

He tweeted a photo of his Freelance shirt Sept. 26, which Denton said helped his company’s popularity increase exponentially.

Cook is wearing the “1985” version of the crown shirt, referring to the last year that the Royals won the World Series. The “2014” version became more popular after the Royals secured their World Series spot.

“I think a lot of people were hesitant to buy into the ‘2014 crown’ design,” Denton said, “but once we were definitely going to the World Series, that particular shirt has exploded to the point where we are working with two different printers in town, and we are now having to go out of town and out of state to help with the demand.

“It seems like every week, what was a big order, the next week is a tiny order,” he said.

Denton doesn’t expect Freelance to sell at this volume indefinitely, but he’s enjoying this 15 minutes of fame.

“I don’t think Freelance will go away completely, but I think this has been the perfect storm,” he said. “I think things will be much quieter two weeks from now than they are today, that’s for sure.”