Making Gender Parity a ‘We’ Conversation 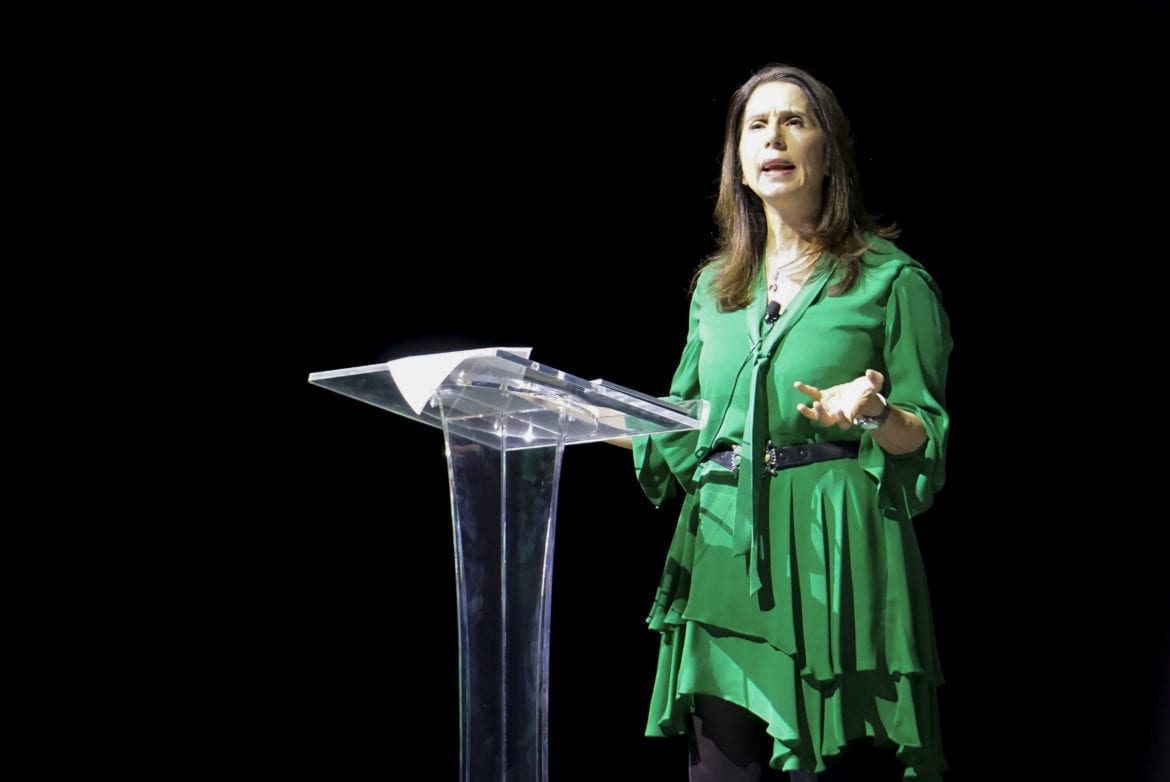 Business coach and author Rania Anderson speaks to a crowd of more than 300 men and women at The Midland Theatre Nov. 15 about transforming the way men and women work together. (Kelly Cordingley | Flatland)
Share this story

When Rania Anderson, a Kansas City-based business and management coach, heard it would take another 217 years to reach worldwide gender equity, she was appalled.

That’s more than 300 years after women gained the right to vote in America and 271 years since the Civil Rights Act of 1964 outlawed discrimination.

“One of the interesting things that people say to me in Kansas City is, ‘It’s a really good thing you’re going to these other countries because they need help,’” she said. “The reality is we’re not doing so great over here.”

Anderson began her coaching career in Kansas City 21 years ago but has since taken her message global. She spoke to more than 300 men and women at the Midland Theatre on Nov. 15 about how to reach gender equity faster than decades and centuries based on the ideas in her recently released book, “WE: Men, Women and the Decisive Formula for Winning at Work.”

Her mission is to equip men and women with solutions and actions they can individually take to change the lack of progress and improve business results in the process. Over the course of her career, Anderson said men increasingly began approaching her asking why her presentations focused on how women could better communicate with men and not the other way around.

“I started to do some research on that topic and realized …this is the part of advancing women and achieving gender equality we’ve left out, which is engaging men in a positive and productive way,” Anderson said.

She argues most men believe they are conscientious enough already , but during her presentation, she said part of the issue rests in the hiring and retention process.

“We have to think about more than just filling a job,” she said in her presentation. “Think about hiring and how we bring candidates on who may have less experience in one area but have something else to offer.”

Instead of asking why a woman doesn’t apply for a job or why she leaves a position, employers should ask the “we question” — what they didn’t do to attract women to the job and what they could have done to get her to stay.

Anderson also points to “death by a thousand cuts,” the small things that stand in the way of progress for women and the need for colleagues speak up if they see or hear something inappropriate.

“Just recently — and this happened right here in Kansas City — a woman told me she got on the elevator in her office building and a man came on the elevator and said, ‘mighty fine boots on some mighty fine legs,’” Anderson recounted. “He didn’t even know that was inappropriate.”

In her recent work with male leaders, Anderson said she’s noticed a wariness, something she calls a possible unintended consequence of the #MeToo movement.

Here in Kansas City, male leaders started reaching out to her for advice, particularly regarding behaviors that had been commonplace for years, like a hug in the office or taking female colleagues out to lunch alone. Men began to fear making missteps, even if though their intent was to be respectful.

“Be sure that you’re thinking about this in a very professional way, and that you’re alert to cues from the other person, which you should have been all along,” Anderson said. “… Approach your interactions with the intent to do the right thing, and if you’re not sure about something, ask the person and have them tell you if they feel uncomfortable in any way.”

Worse is the failure of employers to consider the needs of people with children and spouses — parenthood, not just motherhood — and allowing men the opportunity to spend more time with their children. This is not only critical for parents and reforming workplaces but simply for creating healthier families.

Anderson cited her own son, who is about to become a father himself.

“His girlfriend was telling me that when she first started going out with him, she knew she liked him, but she wasn’t sure they were going to be dating until one night they were at a club and a man said something inappropriate, and Nick, our son, basically shut this guy down. She said he did it very firmly and very calmly,” Anderson said, adding that she’d never shared the story before. “She said it was a turning point for her. And for me, that was the greatest compliment anybody could give me.”

After Anderson’s presentation, audience members were encouraged to network with each other, particularly men and women. Jenna Scott, 27, is the community relations manager at Park University and said Anderson’s message is a reminder of the little things we already know but should be putting into practice.

“We can do better as a team when it’s diverse, and she did a good job of reminding us of that,” Scott said.

Less optimistic was Mike Dodd, a general contractor for Wineteer Construction who attended the event with his wife and said the couple has known Anderson for years.

“The ‘good ol’ boy’ culture has been around forever,” he said, “so changing that is an uphill battle. It starts with conversations like this.”

Anderson challenged the audience to be catalysts for change and work faster than 217 years toward goals that are achievable now in gender equality at work and at home.

“How amazing would it be if the people in this room could — through our small, intentional, deliberate actions — make Kansas City a place that people want to come work, a magnet for talent and capital?”