Hacker For a Day: My Time at the Homes For Hackers 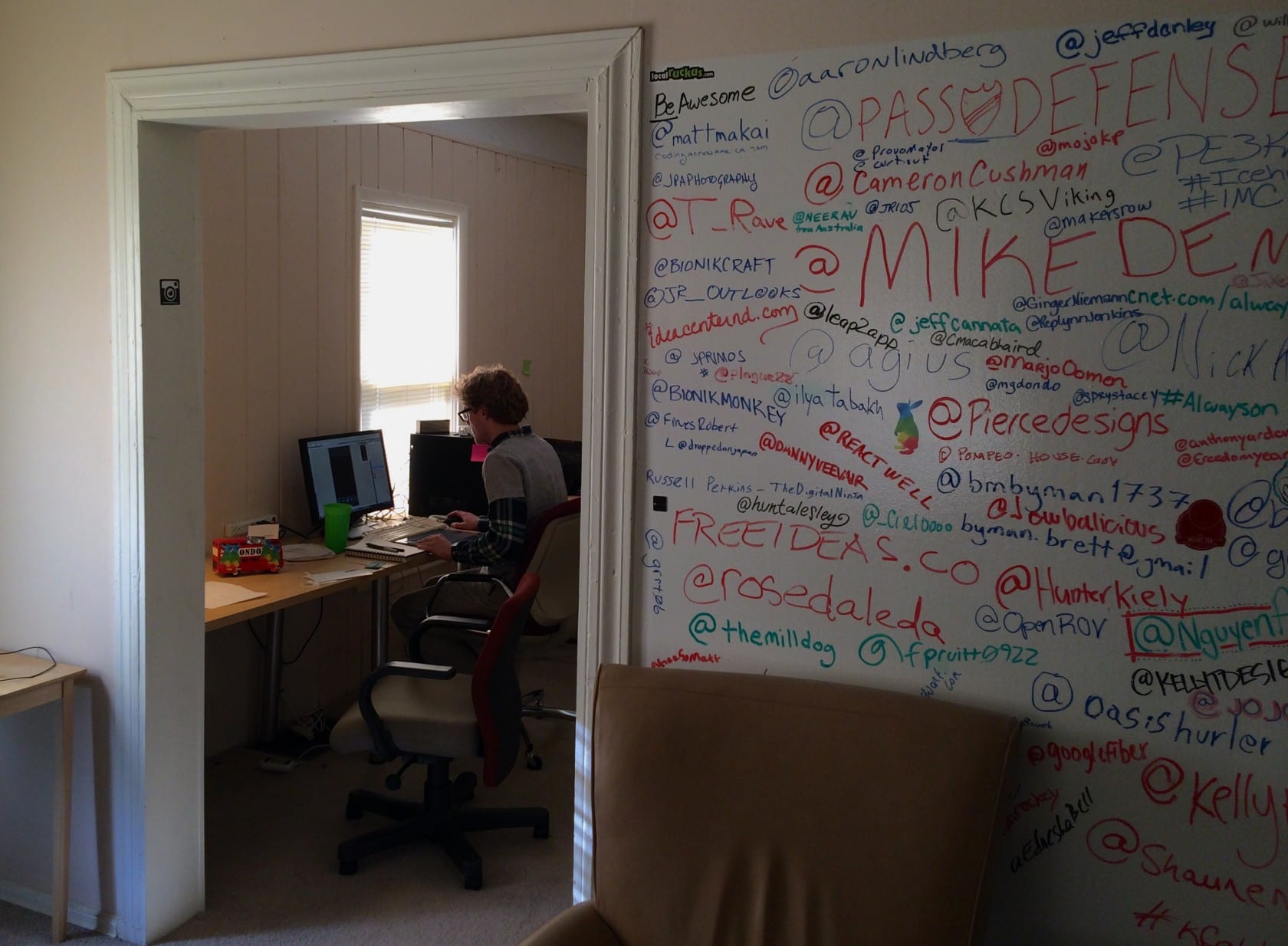 Starting a company is hard. You have to find the right people, technology and environment. Even when all of those basic needs are met, you still have to make sure that you have enough money to cover overhead costs and be sustainable. In a burgeoning startup community, this can become a serious concern. How can someone support themselves while trying to create and manage a startup?

I spent Monday with two startups who live in a house provided by the Homes for Hackers program. Located in the Kansas City Startup Village, Homes for Hackers allows startups to live in the hacker house for three months, rent-free and with access to Google Fiber. The startups apply and agree to a set of rules, including the condition that they move their company to Kansas City.

The Whiteboard Wall, full of names, twitter handles, and messages in the house.

I spent the day with Auston LeRoy and Garrett Kinsman, who are working on the app Audiate. After I introduced myself, I walked into the quaint office-house hybrid, and the first thing that caught my eye was the whiteboard wall filled with names, Twitter handles and messages.

LeRoy is tall and thin, with a slightly unkempt beard that covers a good portion of his face. He moved to Kansas City a week ago from Rochester, N.Y. His partner, Kinsman, is of a similar build, but with blonde hair and a clean-shaven face. He wears glasses with thick frames and almost always speaks excitedly.

LeRoy and I spoke on the front porch of the house. He lit a cigarette while telling me about his startup. “We want to redesign the music player on Android because there is no really good intuitive music player,” he said. At this point, Kinsman joined us outside.

“What we are focusing on is group listening,” Kinsman said. “Because people really listen to music together. Some people even think that’s what led us to become human.” He went on to explain further. “It’s the fact that we were together. We were all sitting around a fire and started playing drums, playing music, and started creating – having an imagination. It brought humans together, and it was one common thing that people could relate to. It’s the same thing today.”

LeRoy smoked his cigarette, tossed it, and we headed back inside. Kinsman, who has a graphic design background, showed me the app’s user interface while LeRoy got ready for our trek around the Village. He told me they are working on a Kickstarter and read me part of the script. “Music is that which inspires,” Kinsman read. “It brings people together and can show us more about ourselves.”

A computer monitor displays the current design for LeRoy and Kinsman’s app Audiate.

Kinsman showed me the design of the app icon, which is somewhat figure-eight shaped, and, after a period of time, LeRoy re-emerged. We then embarked on our self-guided tour of the Startup Village. Our first stop was the original house of the Startup Village at 4454 State Line Road. We were greeted by Leap 2 employees. The office begins in what would normally be a dining room. To my surprise, the employees of the visual search engine startup were willing to stop what they were doing to talk and network.

This style of knock-on-doors networking seemed to work for the new residents. We stopped by the offices of Square Offs and EyeVerify next. Despite meeting each other for the first time minutes ago, the startups were already talking about business strategies and monetization. It can become difficult to discern whether this friendly and casual nature is due to Midwestern culture or if it is the norm for startup communities. It may be both.

When we got back to the hacker house, LeRoy began looking for the next stop on the tour while Kinsman worked on their Kickstarter campaign. The house was almost completely quiet: only keystrokes and short-lived conversations broke the silence.

Soon we were outside again, walking to our next destination, Moblico – about a half-mile away. This startup provides mobile developer services for mobile developers, system integrators and mobile marketers. During our walk, LeRoy reflected on what led him to Kansas City and stated that he is “learning more here now than I would at school.” He told me about Appture, his former startup. It used a technology called M.O.S.I.S., which was supposed to link mobile screens, monitors and televisions to display synced content. He mentioned the challenges that he faced: people not understanding what it was, his cofounder leaving and lack of investors. With the hurdles facing him, LeRoy began work on Audiate. He offhandedly remarked that he is curious about the number of good ideas that just go unfunded.

LeRoy and Kinsman at Moblico talking to one of the employees.

After locating the seemingly hidden Moblico entrance and squeezing into a narrow hallway, we were greeted by a Moblico employee. The office is a wide room with lots of natural light and wooden floors. LeRoy and Kinsman introduced themselves, and the three of them quickly began discussing front-end and back-end coding for mobile app development.

When we made it back to the house, we spoke about the future for LeRoy, Kinsman and their app Audiate. Kinsman has to drive back to Rochester for school when the semester starts, and LeRoy joked that Kinsman won’t have to make the tiresome journey if they manage to get an investor between now and when he leaves. They seemed to share that attitude. They are hopeful for their future and are willing to move across the country to make their company work.

My day with Homes For Hackers reminded me more of a time where you could knock on your neighbor’s door to talk and less of a typical business community. While this program does not guarantee any level of success for the startups, it does give them, and Kansas City, a distinct advantage. For the startups, it gives them three rent-free months, gigabit internet and a community of entrepreneurs to network with. For Kansas City, it allows companies to come here that might not have done so otherwise – and who knows, it could bring the next Google, Apple, Amazon or Ebay to Kansas City.