Everything's Up To Date at The Rep. Finally. 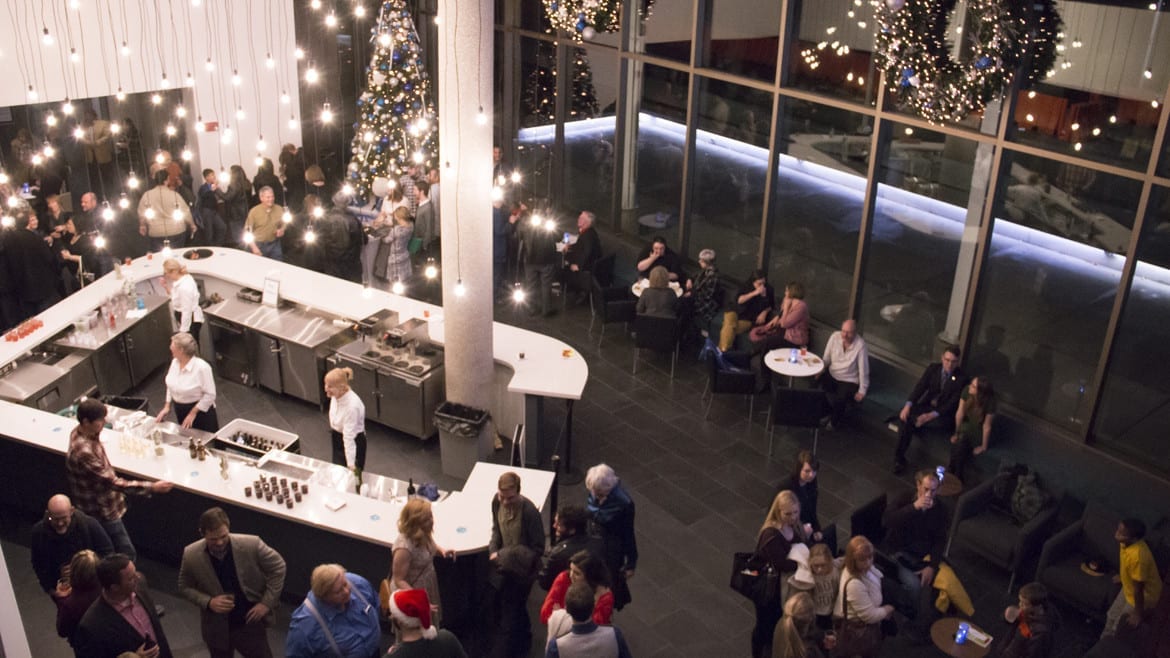 Since artistic director Eric Rosen arrived in 2008, the Kansas City Repertory theater has been staging challenging, world class performances. The theater itself, however, has been a clunky mess. Now, for the first time since being built in 1979, the Spencer Theatre, home of the Rep, has been renovated. To celebrate the completion of a seven-month, $5.6 million renovation project, the Rep had an open house this week and Flatland took a tour.

To start, there’s new signage on the building’s exterior. A lot of people, sadly, don’t know where the Spencer is on the UMKC campus. The new lighted signs out front should help. There’s also a new patio in front for outdoor lounging.

Inside, the lobby is dramatically different. Modeled on the concession space of New York’s Public Theater, the new bar is open and airy, with floor-to-ceiling windows. A modern lighting fixture of dangling bare bulbs hangs above an island-style wet bar. It’s all a massive improvement over the old, card table-sized bar that was pressed against an interior wall.

Not only is it easier to get a drink, it’s easier to get rid of it, too. The lobby features a pair of sparkling new restrooms. Not a terribly glamorous addition, certainly, but one that was badly needed, as anyone who waited in the long lines during intermission can tell you.

On the second floor, there’s a new lounge area for hosting events like meet-and-greets or VIP parties. Disabled or older patrons won’t have to go up any stairs to get to those events, either, thanks to a new elevator. The whole building, in fact, has been brought into ADA compliance, including a wearable, assisted-listening system for theatergoers who are hearing impaired. 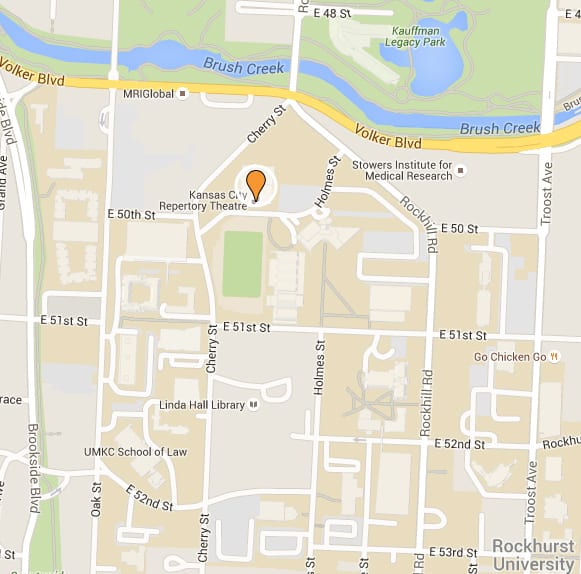 The Spencer Theatre, home of the Rep, is located on the UMKC campus. (Credit: Google Maps)

The most important changes are inside the theater space itself, like new carpeting and upholstery. The old stuff hadn’t been updated since the building opened. It was, in a word, gross. There’s a new stage floor, too. That’s huge. The old one was uneven, squeaky, and creaky. There’s also a new pulley system for moving scenery on and off stage.

Maybe the biggest improvement, though, won’t be seen at all. It’ll be heard. The acoustic profile of the theater has been completely redone, work performed by Kirkegaard Associates, sound specialists with offices in Chicago, St. Louis, and Boulder. Joseph Myers, president and principal acoustician for the firm, described how the sound in the new space was fine tuned.

First, he said, Kirkegaard tested the theater and created a computer model of how sound moved inside the space.  They found a lack of clarity in the center rear of the seating and an overly “dry” acoustic in the back half of the room. In other words, whole sections of the audience were left in what Myers called a “shadow zone.” That means the crowd received no helpful reflections from overhead, while sound bouncing off the side walls and rear wall created confusing echoes.

To fix it, they first replaced the old gypsum board “clouds” that hung under the catwalks. Those panels not only blocked lighting angles to the stage, but provided uneven sound reflections to the audience. Kirkegaard hung new clouds between the catwalks, high enough so they won’t interfere with lighting, and used their computer model to shape and position them.

In the back of the audience chamber, they reworked every surface in the room to create a mixture of absorptive and reflective surfaces. The reflective surfaces give an audience a sense of their own sound – so the room won’t be flat and dead. The absorptive treatments are to avoid echoes and “flutter,” or high-frequency sound trapped in harsh, repetitive patterns.

The result, Myers said, is a room that’s dry, but not deadened.

“The really important work was getting rid of the echoes,” he said. “ We wanted to find and fix the echo problem, but lengthen the reflection.”

They did that. According to Myers, “There’s just enough liveness for the actors to get useful response from the room, and not be tempted to push, while the audience can hear their own laughter and applause and feel engaged.”

Of course, that presupposes that there will be laughter and applause. But, with a building that’s finally worthy of the quality shows staged inside it, there’s sure to be plenty of it.