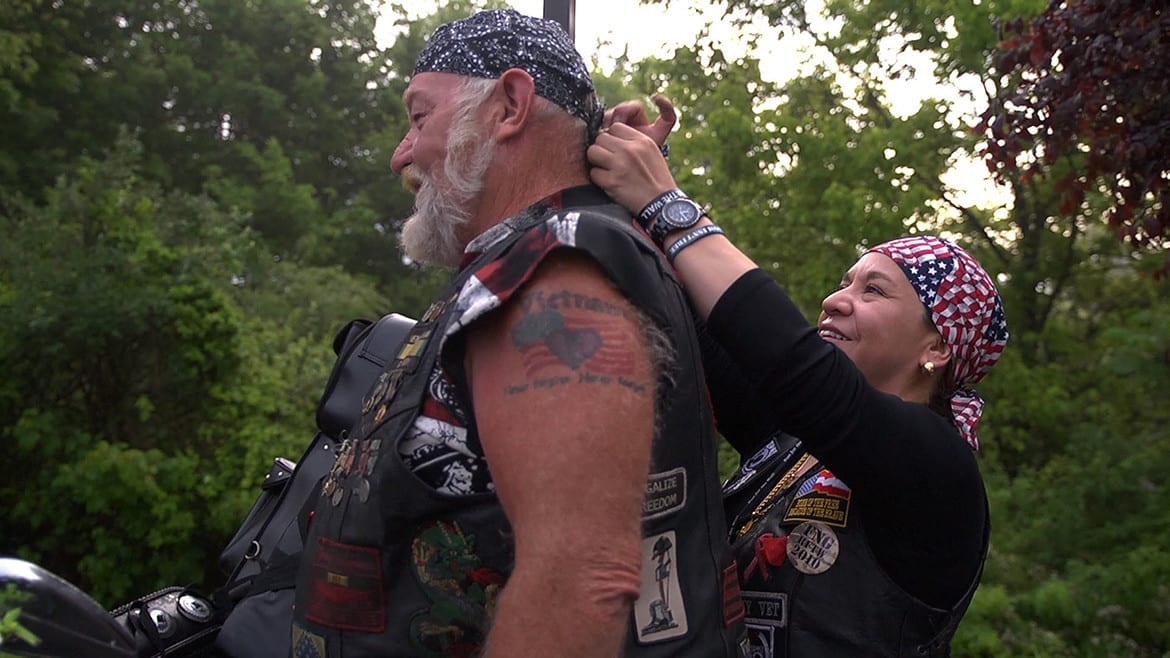 Ron “Stray Dog” Hall got his big screen debut as Thump in the Academy-Award nominated film “Winter’s Bone.” Director Debra Granik recruited Hall for the part of the ruthless crime boss after seeing him at a biker church in southern Missouri.

But while Hall physically fits the part, a new documentary from Granik reveals that in real life the Vietnam veteran is a tender-hearted man devoted to his immigrant family and fellow veterans.

KCPT will host a screening and discussion of “Stray Dog” with special guest Ron Hall as part of its Indie Lens Pop-Up series on October 10 at 11am at the Plaza Branch of the Kansas City Public Library.

Community Engagement Producer Lindsey Foat asked Hall a few questions about the film. Hall’s responses have been lightly edited for length and clarity.

Where does the name “Stray Dog” come from?

Many, many years ago I was at a biker’s meet and we had a stitcher — a stitcher’s a person that sews patches on vests — and she was at the end of the table. We were eating our meals and a guy would take leftovers and dump them in a gallon drum. Well, this poor old dog showed up and he was sniffing around the drum. All he was wanting to do was get something to eat and this guy, he was wanting to run this dog off. And I go over and get in front of him and said, “Hey, whoa brother. You might as well run me off. This old dog doesn’t want anything that I don’t want. He ain’t that much different from me, and I doubt that he’s that much different than you if you think about it … He wishes he had something to eat, drink, a place to go. He wishes somebody gave a damn about him.” So I fed him… I woke up the next morning and I had “Stray Dog” sewn on my vest… It just seemed to kind of fit and I’ve kept it ever since.

So you knew Debra Granik from your role in “Winter’s Bone,” but how did Granik approach you about devoting a documentary to you?

I never tried out for a part in any movie to tell you the truth, not in what you call trying out. I never asked for a part. I got the part in “Winter’s Bone” because Debra seen me in a biker’s church and she comes up to me… and I’d seen there were folks with cameras, but I didn’t think too much of it. She asked me if I’d be interested in trying out for a part and my response was like, “Girl, I ain’t no actor.” But the conversation went on a little bit and she gave me confidence that I could do this. I wouldn’t have done it otherwise … I didn’t know she was looking for a drug dealer at the time, but it still came out alright and we did the movie and she came back and she was considering doing a documentary about the economic situation across the midwest. And I was like, “Debra you know we’re pretty well aware that we don’t have what a lot of folks on the east and west coast have, but we have what we need. We really don’t know we’re poor and we’d just as soon you didn’t tell us. But I will do this for you if you will consider putting the veterans’ situation in this documentary then it won’t cost you nothing. Myself, my friends we’ll do this. And if you’ll just follow us to the (Vietnam Memorial) one time and make up your mind if you want to do it or not do it, I’ll do whatever it is you want me to do either way.” But I knew that if she followed us to the wall that she would put us in the documentary and that’s how it came about. It just seemed like it was a story worth telling, you know? We’re a very misunderstood part of culture and it’s a lifestyle that works for us and we get some of our brotherhood back in biker groups and I kind of think that we get addicted to adrenaline too, we do something to feel alive.

What was it like having a film crew follow you around your home and the ride to D.C.?

It does get kind of monotonous, but it was never a real issue for me. I had a little fun with them now and then. One of the camera guys was following me through Branson. And this lady stopped me, she looks at me and says, “Are you somebody important? Somebody I should know?” And I said, “No ma’am, it’s America’s Most Wanted. He told them I was here, but they didn’t believe him so he wants to know if he can take some pictures.” So it kind of worked, it was all right.

You know we just did what we do. I don’t know that we ever actually adjusted to it. It’s not like I’d want a camera following me around every minute of my life. But I knew it was there, I agreed for it to be there so I ain’t gonna make no qualms about it. There was one incident kind of. I don’t get embarrassed very easy, I just undress and go to bed. And they were still here and she was wanting to film us together in bed, whatever I don’t know. So I’d go to bed, Alicia’s in the bathroom. I looked at Debra and said, ‘If you don’t want to turn this into a porn you might want to leave.’ But it’s all good.

The New York Times review of “Stray Dog,” said that you’re a “complex veteran,” and a “complex American.” Do you think this says something about you or the way that veterans are typically depicted in media?

I think I am about as simple as you can get. I do. I tell you, when you can describe any given color… pick the color blue. When you can describe that color to someone who has been blind all their life, then you have achieved a level of communication that humans just don’t have. And that’s kind of what it’s like for a veteran to describe to anyone what it was like being in Vietnam. We can’t expect them to understand and they’re not going to understand and from their point of view I guess it seems pretty complicated. From my point of view, it’s just simple. I am a simple man. I don’t require much I don’t need much, I don’t ask for much. I’m happy with what I have, but I know that I don’t see the world the way that most people do.

What do you hope people who see “Stray Dog” will get from the documentary?

I hope they will stop thinking that (Vietnam veterans) are all a bunch of drug crazed baby-killers… This is what we came home to… A lot of the guys that went to Vietnam were from little towns all across this country. (In these little towns) many veterans are there who don’t know that they have a brotherhood that will accept them. When you hang with your brothers, you hang with people that understand and don’t judge you and know what you’ve been going through, life just gets a whole lot better. I just hope the message gets to these guys that you’re not alone, I know you feel alone and you think you’re alone, but you’re not.

I will tell you one thing that I’m very pleased about… I mean if you’ve got two Vietnam veterans locked in a metal container and you said you wouldn’t let them out or feed them until they agreed on something political, they’d probably starve. It’s difficult to get us to agree on things of this nature and I did expect some flack from this film because there are so many out there that will ride the backs of veterans and make money off of our suffering. I was afraid that at one point or another that there would be some veteran out there accusing me of this. But it’s never happened. Everyone has liked the film so far and I’m very euphoric about that.

Join KCPT for a free screening of “Stray Dog” with special guest Ron Hall on October 10 at 11am at the Plaza Branch of the Kansas City Public Library. More info here.