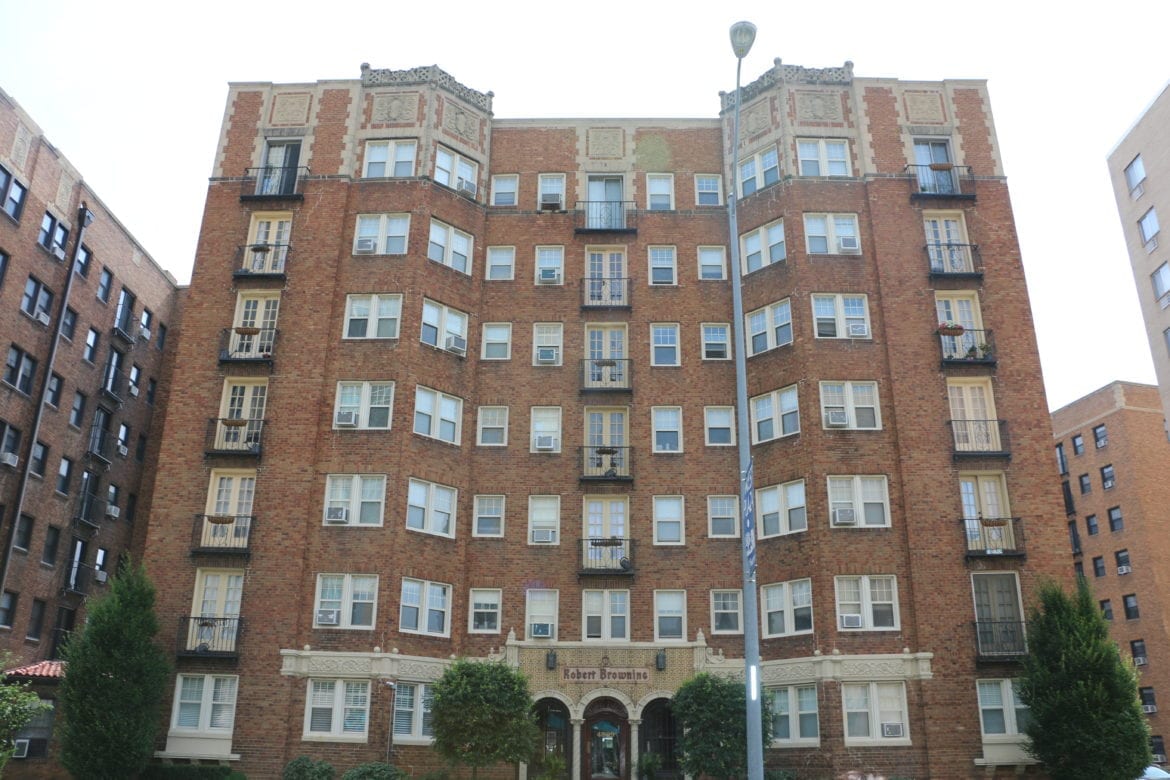 The Robert Browning apartment building is one of the “Poetry Buildings” on the west side of the Country Club Plaza that have long been attributed to architect Nelle Peters. However, historian Tom Taylor discovered the names of architects Jesse Lauck and Elmer Boillot on the original plans. (Photo: Daniel Boothe | Flatland)
Share this story

Tom Taylor is about to rewrite a chapter of Kansas City history.

Through research for an upcoming talk, the architectural historian has debunked the long-held belief that a group of apartment buildings on the west side of the Country Club Plaza are the sole work of well-known architect Nelle Peters.

Jesse Lauck and Elmer Boillot also apparently put their architectural stamps on the buildings, distinctively named for literary giants like Mark Twain and Eugene Field. They are sometimes referred to collectively as the “Poetry Buildings.”

The news has delighted Lauck’s 87-year-old daughter, Patricia Lauck Johnson, who hopes that her publicity-shy father will now get the recognition he deserves.

Flatland spoke with Taylor about his research, architecture, the impact of his discovery — and why he considers  Boillot a “mystery man.”

What initially sparked your interest in Jesse Lauck and Elmer Boillot, and can you speak of the influence on Kansas City architecture over the years?

I worked at Unity Village for 15 years, and was always interested in the history of the place. So that was the first connection, because Lauck and Boillot had designed the tower. But that was really the extent of information I knew, I didn’t know much more than that. The library contacted me based on the fact that I had worked there and suggested the program. And that sent me off on five months of research, and I came up with some great information. What I find to be so amazing is that Lauck and Boillot are not very well known. But they had tremendous influence, they designed the Phillips Hotel downtown, the Walnuts at 50th and Wornall, and countless mansions in Mission Hills, just to name a few.

During your research you uncovered that Lauck and Boillot had a big hand in designing the Poetry Buildings on the West Plaza that have been widely attributed to Nelle Peters. How did you make that discovery?

Well, I had always heard a lot about Nelle Peters over the years. She is one of Kansas City’s best known architects, and designed an estimated thousand buildings in the area, and so, I had always heard about her and her connection with the Plaza. However, when I looked at the original plans of the Poetry Buildings at the State Historical Society of Missouri at UMKC, listed right there with Peters on the credit blocks were the names Lauck and Boillot. After doing a little more research I discovered through a directory that Lauck and Boillot had offices side by side on the 10th floor of a downtown building at the time. And Nelle Peters’ office was next door on the same floor. So that confirmed to me that the three of them all worked together on several of those buildings, not all but many. 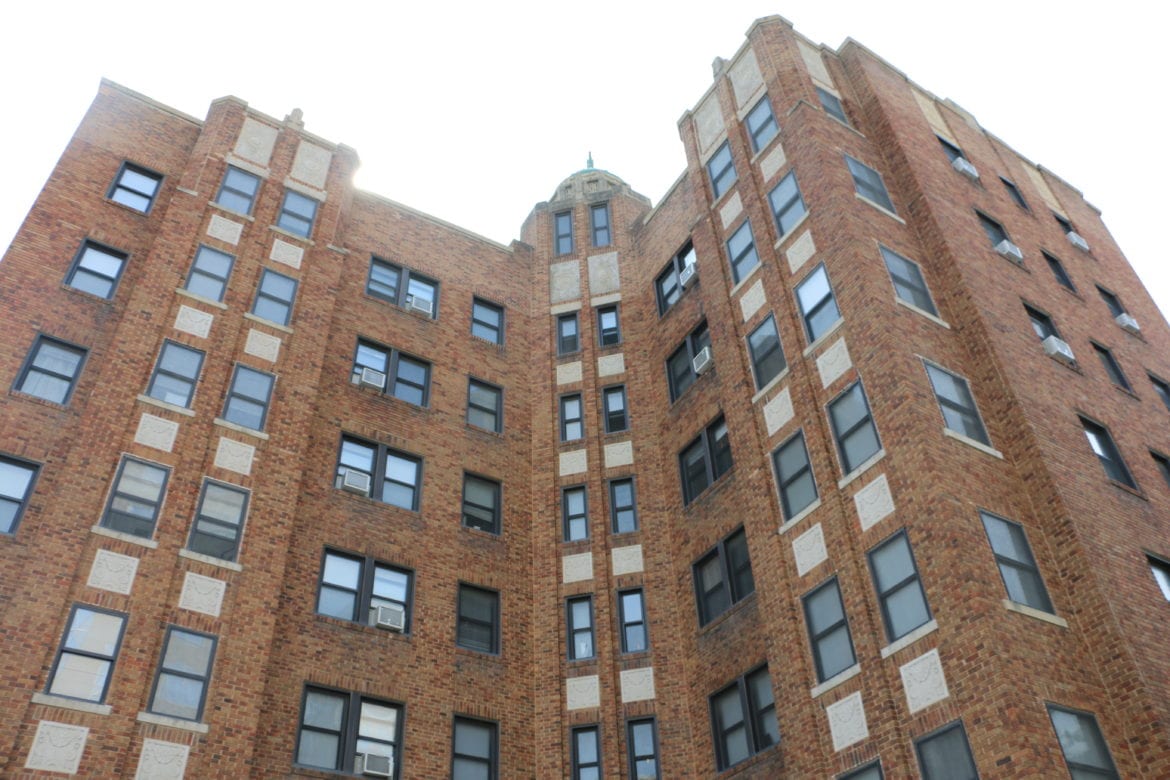 How do you feel as a self-described “architecture buff” to potentially rewrite history?

Well, it’s kind of fun. When I started out on my research, I just knew their names, I didn’t know much else. I still don’t know much about Boillot, I call him a “mystery man” because he remained single his whole life, he had no family. I even visited his grave to see if he was buried next to someone else, to give me a start. But he died single with no family. So I haven’t gotten to know him as much as I would have liked. My goal during this process was to learn more about them and who they were personally. For the program at the library, I didn’t want to just show pictures of houses and buildings, I wanted to shed a little more light on who these men were personally. I have learned a lot about Lauck thanks to his family, his daughter and two granddaughters. Their descriptions of him paint a picture as being a quiet man, but a gentle giant. He who accomplished so much, but who never bragged and did not seek out the limelight. But I think it is great for the family to see Lauck get the recognition that he deserves.

Can you describe working with Lauck’s family, and how they have assisted in your research?

They say there are no coincidences, so I had discovered through a city directory where Lauck’s house was, and it happened to be for sale. So I drove over there, and in the mailbox was a contact sheet for potential buyers, and on it was the contact information for Laura Mytinger. So I called her because I wanted to know how to pronounce Lauck. So I asked her if she knew him, and she says, ‘yes, he was my grandfather.’ So then she introduced me to her sister and her mother, Lauck’s daughter, Patricia. And her mother is really the one who gave me so much, she put together a big scrapbook of all these different buildings Lauck had designed. And it was just fascinating to see all the other things that he had done. I found out among so many others, he had designed the Blue Ridge Mall, and the Holiday Inn by Municipal Auditorium. But to me, still, the most recognizable is still the tower at Unity Village.

The Poetry buildings stand near where the Nelle Peters Apartment buildings that were demolished by Price Brothers after the Historic Kansas City Foundation failed in their efforts to save it. Can you speak to your thoughts on their demise, and what part does architecture play in our city’s fabric?

While I think it is important to keep some buildings, you can’t save them all. As far as the apartment buildings, I am not going to stay awake at night because of it. No building is going to stand forever. But I do think it is important to save a building when we can. I am really looking forward to sharing everything I have learned about these two men, and hopefully we recognize what they did for Kansas City.

— Daniel Boothe is a reporter for Kansas City Public Television. To reach Boothe, email him at dboothe@kcpt.org