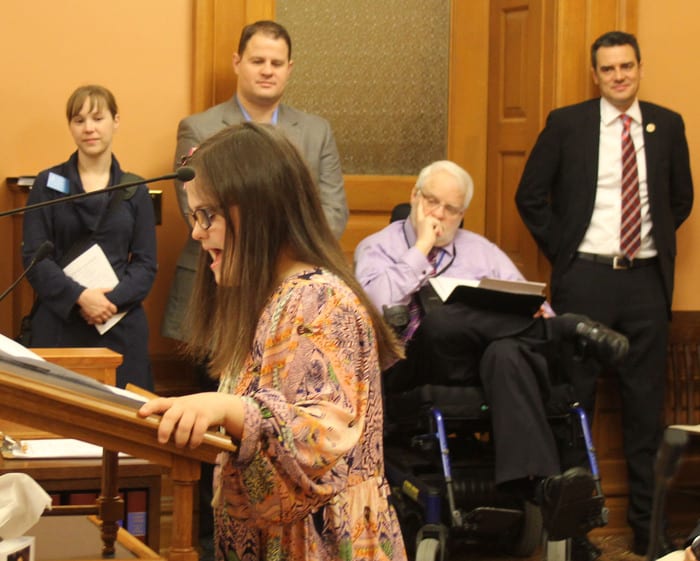 On a day when Congressman Kevin Yoder testified before a Kansas House committee, it was a 15-year-old Olathe South High School freshman who stole the show.

Rachel Mast, who has Down syndrome, ebulliently encouraged the Children and Seniors Committee to approve a bill to allow tax-exempt savings accounts for Kansas children with disabilities that would not jeopardize their Medicaid benefits.

Mast told committee members the Achieving a Better Life Experience, or ABLE, Act would help her achieve her dreams of going to college, getting married and living in a pink house.

“The ABLE Act will help me save money and have a job,” Mast said.

At one point Mast said she was considering continuing her education at the University of Kansas and looked over to where Yoder was leaning against the wall. The congressman, a former KU student body president, gave her a thumbs-up.

“You may be one of the most persuasive conferees I’ve ever heard,” said Rep. Melissa Rooker, a Republican from Fairway.

Rep. Ponka-We Victors, a Wichita Democrat, told Mast she would not have had the courage to testify at a legislative hearing when she was Mast’s age.

“I want to live in a pink house someday too,” Victors added.

Rep. Connie O’Brien, a Republican from Tonganoxie who chairs the Children and Seniors Committee, said the committee will vote on the bill Tuesday.

Yoder said he got to know Mast and her parents, Jonathan and Jawanda, through their years of lobbying Congress to allow states to set up the disability savings accounts, which mirror the existing 529 plans for college savings.

Yoder said he pushed House leadership to bring the federal bill up for a vote several times and apologized for how slowly the wheels turned in Washington, D.C.

But with the federal bill’s passage in December, he said Kansas should now act quickly to become the first state to take advantage of it.

The bill would allow Kansans with disabilities under the age of 26 to have a tax-free savings account in which they could contribute $14,000 annually and withdraw the money tax-free if it’s used for disability-related expenses like transportation or home accommodations.

Any funds in the account up to $100,000 would not count against the disabled Kansan’s Medicaid and Social Security benefits — a key point given that Kansans with disabilities are currently limited to $2,000 in assets if they wish to retain those benefits.

Estes said his office would request about $50,000 to get the program off the ground, with a target start date of July 2016.

After that, Estes envisions administrative costs being borne by a private contractor from the financial realm, which would be chosen through the regular state bidding process.

Estes said the hit to the state’s tax revenue should be minimal, because without the accounts, families have little incentive to increase their taxable income if it means jeopardizing disability benefits.

Estes’ agency estimated the state might lose about $18,500 a year in tax revenue. The Kansas Department of Revenue estimated the fiscal hit would be more like $40,000 per year.

Both figures are dwarfed by the state’s $6 billion general fund and the cost of income tax cuts approved in 2012.

But the state is facing a budget crunch due in part to those tax cuts, and Rep. Susie Swanson, a Republican from Clay Center, said she wondered whether the fiscal note could squeeze through a Legislature looking to cut, rather than add, spending.

“I share your concerns a little bit,” Estes said.

Swanson said she hoped cost would not deter the bill’s passage.

“There’s nothing in this bill to not like,” Swanson said.

Federal law allows for states to use money left in the accounts to recoup Medicaid expenses after a beneficiary’s death, though Rocky Nichols, executive director of the Disability Rights Center of Kansas, said “that doesn’t mean that they have to.”

Nichols’ group supports the legislation, which he said is overall “a great bill.”

Jawanda Mast said the bill would alleviate a gut-wrenching Catch-22 that parents of disabled children face. When she learned that her first child would be born with Down syndrome, she said hospital staff counseled her not to save money because it might prevent her daughter from accessing Medicaid services. But she was also told that her daughter would face lifelong expenses related to her disability that would not be covered by Medicaid.

“Why are we penalized for having a disability?” Mast said. “We need to be saving.”

Mast, speaking on behalf of the National Down Syndrome Society, thanked Yoder and the rest of the Kansas congressional delegation, with the exception of Congressman Tim Huelskamp, who was one of 17 “no” votes when the federal bill reached the U.S. House of Representatives.