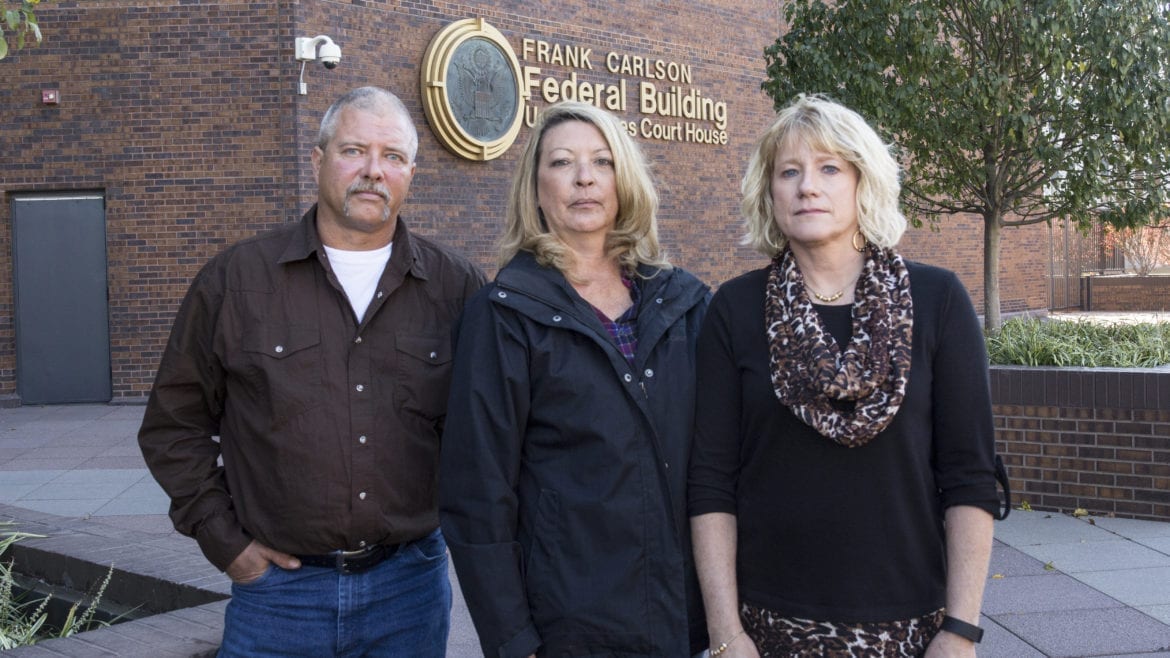 From left, Kevin and Zo Bock and Inga Klahr, three family members of those killed in the Atchison Grain elevator explosion. The Bock's son, Chad Roberts, and Klahr's husband, Darrek, were killed in the 2011 explosion that killed six.
Share this story

TOPEKA, Kan. – Officials of Kansas City-based Bartlett Grain will not face criminal charges in the aftermath of a 2011 explosion at the company’s Atchison elevator that killed six workers, the U.S. Attorney for Kansas said Thursday.

The announcement came just as family members of the workers who were killed emerged from a nearly 2-hour meeting at the federal building here with prosecutors who had been considering possible charges against Bartlett executives for nearly four years.

“We have determined there is not sufficient evidence to support criminal charges against the owner, Bartlett Grain Company,” the U.S. Attorney said in a short statement.

Family members said they were disappointed by the decision, and that it took four years to make that determination. But some survivors said they were satisfied that federal prosecutors at least tried to make a case.

“I am very disappointed in the outcome of the criminal case today; they are not going to proceed,” said Inga Klahr, whose husband, contract grain inspector Darrek Klahr, died in the blast on Oct. 29, 2011.

Inga Klahr, center, speaks outside of the federal building in Topeka after the U.S. Attorney for Kansas told of the decision to not pursue criminal charges in the case of the blast that killed her husband, Darrek Klahr. Zoe Bock, left, lost her son in the blast, and Darrek Klahr’s mother, Barbara, is right. (Video: Brad Austin | Flatland)

The decision in the criminal case does not affect a separate civil action against Bartlett by a another federal agency, the Occupational Safety and Health Administration, which accused Bartlett of serious and willful violations of federal safety standards.

Just months after the explosion, OSHA proposed $406,000 in penalties against the company for knowingly violating workplace safety rules that, OSHA says, could have prevented the deaths of those six workers.

That case had been on hold during the separate criminal investigation by the U.S. Attorney here, but will now proceed. Fines in such cases, however, are often negotiated down.

Bartlett, which has long objected to the criminal investigation as being groundless, had no immediate comment on today’s decision. But the company in the past has strongly denied accusations of wrongdoing on its part and has questioned the government’s findings.

But the families strongly disagree.

“There are issues in this case, and it is an insult (that criminal charges were not brought),” said Kevin Bock, whose stepson Chad Roberts died in the blast. Bock said after the 2-hour meeting Thursday, “I never got a specific reason other than they could not find (evidence) beyond a reasonable doubt.

“I am satisfied that they tried; they took it down to the wire trying to find something,” Bock said, adding “I still believe there is something there.”

Kevin Bock urges more rigorous safety regulations following news from the U.S. Attorneys’ office that criminal charges would not be pursued in the blast that killed his stepson, Chad Roberts. Bock said he was satisfied that federal prosecutors tried to make a case against Bartlett Grain. (Video: Brad Austin | Flatland)

Inga Klahr added, “It is my hope that all employees throughout the U.S. can come to an agreement that this is a turning point in history.” She asked other families to join an initiative to improve workplace safety.

“Don’t let the suffering of our families and the death of these six men be in vain.”

— Mike McGraw is a Special Projects Reporter for KCPT’s digital magazine, Flatland. Follow his stories online at FlatlandKC.org and @FlatlandKC.