For vaccination rates, Kansas and Missouri fall in lower half of states 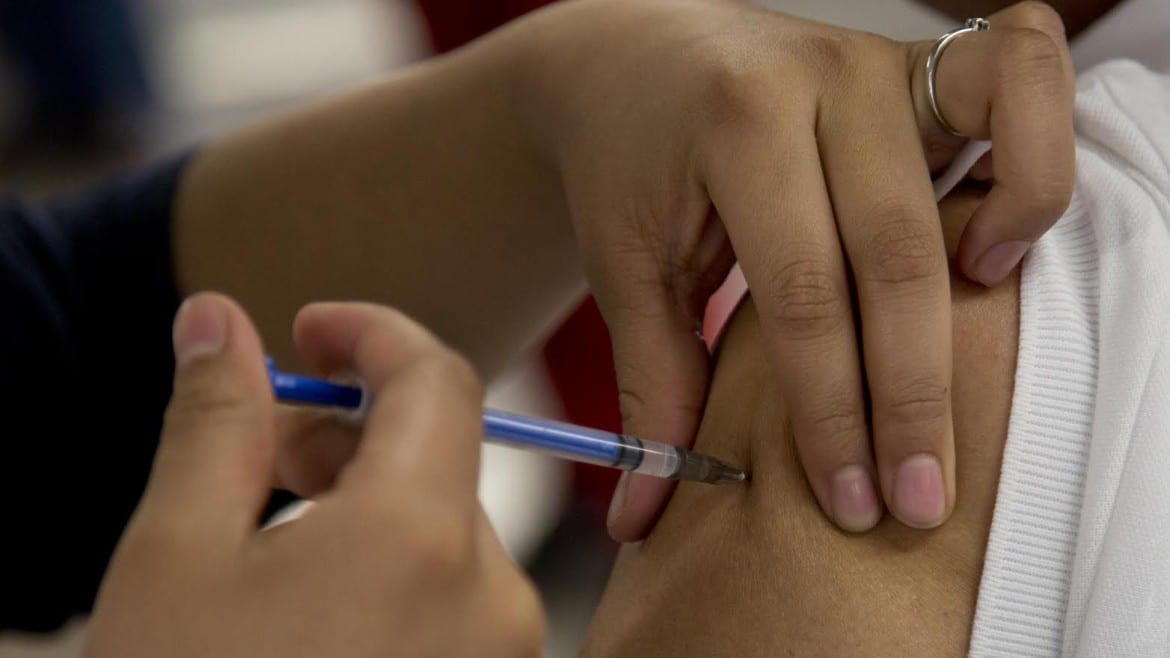 With measles making a comeback in the United States after it was thought to have been eradicated 15 years ago, a new analysis finds that fewer than 90 percent of preschoolers nationwide have received the recommended vaccination against measles, mumps and rubella.

Both Kansas and Missouri fell below the 90 percent threshold for preschooler vaccinations, the baseline goal set by Healthy People 2020, a federal interagency task force.

The analysis by Trust for America’s Health, a Washington, D.C.-based health policy organization, looked at MMR vaccination rates in all 50 states and found that Kansas and Missouri ranked in the bottom half: Kansas tied for 39th   at 89.4 percent and Missouri tied for 35th at 89.8 percent.

Health experts say that when vaccination rates drop below 90 percent, there’s a danger that “herd immunity” – the protection afforded a community when a certain percentage of the population is immune to a disease – may be lost. Communities in which immunity falls beneath that threshold are vulnerable to measles outbreaks.

“We rely on the rest of the herd, the rest of the community to take the vaccines to protect those individuals who cannot take it,” says Lisa Hubbert, an epidemiology specialist with the Kansas City, Mo., Health Department. “And so if the anti-vaxxers choose not to take it – those parents (who) choose not to vaccinate their children – we are putting those who cannot at risk.”

The Centers for Disease Control and Prevention (CDC) recently issued a health advisory about the measles outbreak, which has been traced to Disneyland in California and so far has afflicted more than 100 individuals in 14 states. Most of those who came down with the disease had not been vaccinated.

So far, no measles cases have been reported in Kansas City this year, according to Kansas City, Mo., Health Department spokesman Jeff Hershberger.

Last year, there were 22 reported measles cases in Kansas City, Mo. Several dozen people who were exposed were quarantined in their homes and weren’t allowed to leave unless they provided documentary proof that they were vaccinated.

Ten of those people came down with measles, “so had we not quarantined them, they would have been working and exposed countless numbers of others,” Hubbert says.

Measles is highly contagious – 90 percent of those not immune to the virus will become infected if exposed to a carrier – and spreads rapidly: one infected person can infect 12 to 18 others. Worldwide, some 20 million people contract the measles and 146,000 die from it every year, according to the CDC.

The CDC recommends that all children get two doses of the MMR vaccine, one at 12 to 15 months of age and the other at 4 to 6 years of age. The vaccine is 95 percent to 97 percent effective and considered safe. Side effects are rare.

Health experts attribute the recent outbreak in part to parents who refuse to vaccinate their children because they deem the vaccinations unsafe or because they have religious or philosophical objections.

Some anti-vaccine proponents have linked vaccinations to autism, a widely debunked notion that finds little support in the scientific literature. A 1998 research paper in the Lancet that first made that claim was later deemed fraudulent and withdrawn. The paper’s lead researcher was subsequently stripped of his ability to practice medicine in the United Kingdom.

While visiting Kansas City last week, Dr. Vivek Murthy, the U.S. Surgeon General, said that MMR vaccines were safe and effective. He said there was no evidence it was linked to autism or other developmental disorders.

“I want to say that definitively there have been studies which have proven there is no link between the measles vaccine and autism,” Murthy told reporters. “But not everyone has gotten this message, so that’s partly why I’m here out on the road, to talk about the importance of things like immunization.”

Kansas has attempted to boost preschooler immunization rates through a program called “Immunize and Win A Prize,” which was begun in 2003. Under the program, families who timely vaccinate their children up to age 2 receive prizes such as Band-Aid dispensers and sippy cups and are entered into a drawing for a $300 payment applied to their utility bills.

Aimee Rosenow, a spokesperson for the Kansas Department of Health and Environment, says a 2010 survey done by the Kansas Foundation for Medical Care found that the program had boosted immunization rates by 78 percent.

In its analysis, Trust for America’s Health reported that New Hampshire has the highest MMR vaccination rate for preschoolers, 96.3 percent, while Colorado, Ohio and West Virginia have the lowest, 86 percent. Nationwide, the organization said, 91.1 percent of preschoolers are vaccinated.

It noted, however, that more than 2 million preschoolers don’t receive all recommended vaccinations on time.

“It is so important that communities maintain high levels of MMR vaccination—because measles is so infectious—and especially when outbreaks are occurring around them,” Litjen (L.J) Tan, chief strategy officer of the Immunization Action Coalition, said in a news release.

“To have pockets where community immunity is below 90 percent is worrisome as they will be the ones most vulnerable to a case of measles exploding into an outbreak.”