Update: Looking for the Mystery Man of Runway One

Reporter Mike McGraw has been digging. Here’s what he found. 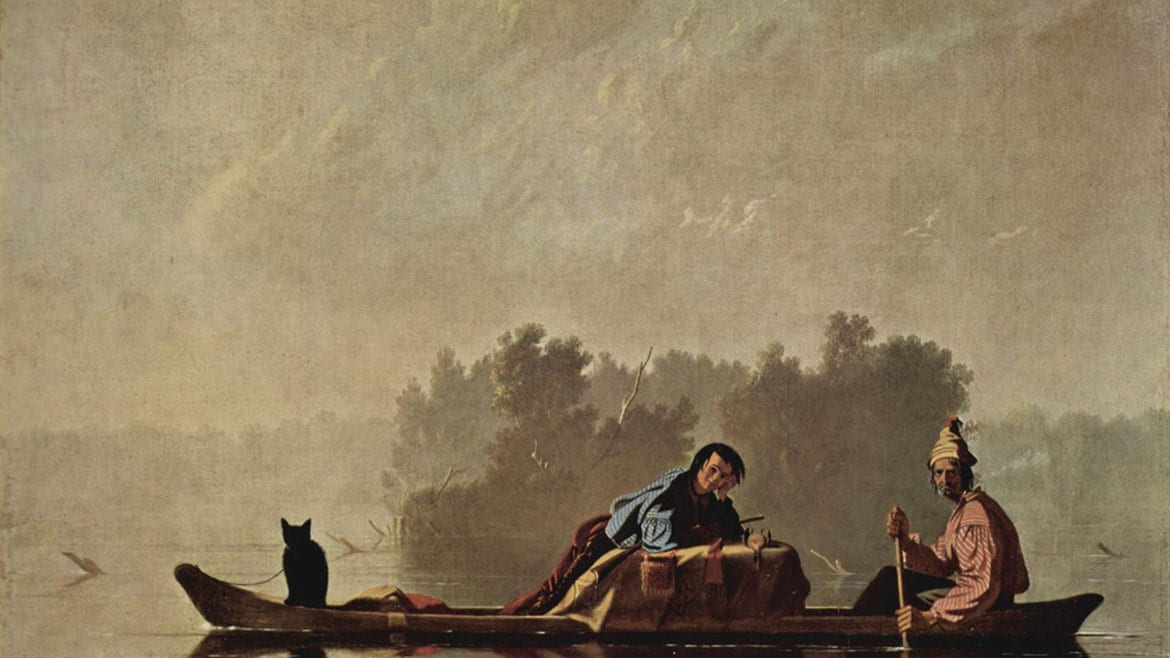 This 1845 painting by George Caleb Bingham depicts early fur traders on the Missouri River during the era of the Chouteaus, an early fur-trading family that operated out of Missouri in the 1800s. The painting is housed in New York's Metropolitan Museum of Art.
Share this story

“The boundaries which divide Life from Death are at best shadowy and vague. Who shall say where the one ends, and where the other begins?”

In an effort to shed more light on what may be Kansas City’s oldest cold case, KCPT’s Hale Center for Journalism arranged for more testing of skeletal remains unearthed in the summer of 2013 beneath a busy runway at Wheeler Downtown Airport.

The Jackson County Medical Examiner’s office — which has completed its investigation —  agreed to have one of the bones shipped for a radiocarbon analysis after the Hale Center agreed to pay the cost.

The newly released results offer a few more clues about the Mystery Man Under Runway One. But, true to the case so far, each new clue seems to raise more questions.

Until now, all we really knew about him, thanks to the medical examiner’s reports, was that he was a male Caucasian, about 5-feet 9-inches tall.

He likely died in the spring or summer. He was somewhere between 35 and 55 years old, but possibly as young as 20. And he had a bony overgrowth, or “button osteoma,” that may have been visible above his upper lip.

We have no idea how or why he died, and there’s no evidence he was the victim of a crime. But, in words attributed variously to astronomer Carl Sagan and former secretary of defense Donald Rumsfeld, “absence of evidence is not evidence of absence.”

The radiocarbon analysis was done in the hope of more accurately determining that date of death, often referred to by forensic anthropologists as the post-mortem interval.

So where are we now?

Those tests, in fact, showed that he could be vastly older than we thought, and may have died as many as 350 years ago, around 1665.

Not ancient, but really, really old.

But those same results also showed that he could have died as recently as 1950.

That’s a massive, 285-year time span. And it illustrates a peculiar limitation of carbon dating, often inaccurately portrayed on “CSI”-type television shows as a precise, 20-minute process that can pinpoint the post-mortem interval with great accuracy.

“We want to think we can do a whole ‘CSI’ thing,” said Vicki Wedel, a California anatomy professor and forensic anthropologist who helped study the remains for the medical examiner. But that isn’t always possible.

While the Hale Center paid the $685 cost of the radiocarbon analysis, it was performed with the cooperation of Jackson County Medical Examiner Dr. Mary Dudley by Beta Analytic, Inc. in Miami.

For legal reasons, her office retained “chain of custody” of the test samples, and results were sent to her, then shared with the Hale Center.

Beta Analytic President Darden Hood did his best to explain the process, which relies on analyzing the carbon-14 isotope relative to present-day atmospheric levels.

Carbon-14 naturally exists in all living things. It is created through tiny reactions in the air between nitrogen and cosmic radiation. It is radioactive, but present in only very tiny amounts.

It is constantly decaying, but, in living things, is also being replaced.

It enters plants through photosynthesis and enters animals and humans through the food chain. An equilibrium exists in living creatures that balances the ongoing radioactive decay with the intake.

When someone dies, the ingestion ceases, but the decay continues. This starts the clock used by the dating lab, which measures the remaining carbon-14 and compares it to present-day levels to come up with an “age of death.”

In addition to radiocarbon dating, labs use a critical factor found in plants and animals that lived after 1954. That is “excess carbon-14” generated by above-ground nuclear bomb testing.

Each explosion created large amounts of carbon-14, over and above that found naturally, indicating that the person was alive after 1954.

Scientists call this “bomb carbon.” And it peaked in 1963, when international treaties banned further atmospheric testing. At that time, excess carbon-14 in the air was almost double what nature intended. And even today, it remains about 5 percent higher than pre-testing levels.

It is clear from the analysis that our mystery man did not contain any bomb carbon and, therefore, died prior to 1954, Hood said. But he is still young enough to fall into a kind of radiocarbon black hole, limiting the time of death in this case to sometime between the mid-1600s and about 1950, a frustratingly long post-mortem interval.

In such cases, Hood said, “using radiocarbon by itself has limited application … so other lines of evidence are needed to refine the time of death.” 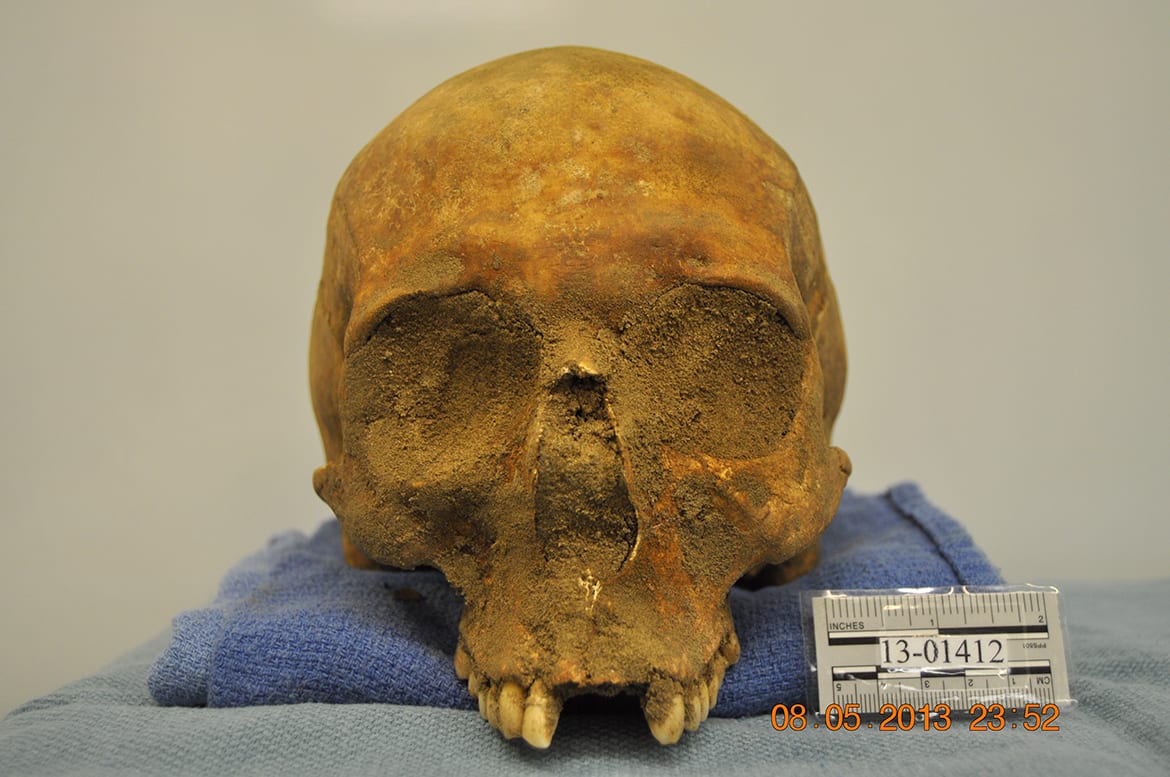 But in the case of our mystery man, there wasn’t much to go on.

No clothing, no tissue, hair or blood. No nearby tools or clues — only parts of a leg, foot bones and a dozen teeth.

But other factors — and some rank speculation — allow us to narrow the post-mortem interval considerably.

For example, historical evidence shows that Caucasians, like our mystery man, were rarely found in this region before the late 1700s. That cuts more than a century from the early end of our post-mortem interval.

There is no reference to specific dates of death in earlier reports on the case by the medical examiner’s office.

But Kansas City Homicide Detective Richard Sharp, who oversaw the police investigation of the case, told the Hale Center that reliable sources familiar with the case told him that the “post-mortem interval” was believed to be 100–150 years.

The medical examiner has not confirmed that.

By taking the radiocarbon analysis and Sharp’s estimate into consideration, we can re-plot his year of death — and we can do little more than spitball here — to some time between the 1790s and the 1860s.

That’s our best guess. And it sort of fits with the only reference to the age of the bones in the medical examiner’s earlier reports.

One anthropologist notes that the remains “are possibly too old to be considered as a forensic case. However, they are probably recent enough to be of significant historical interest.”

Forensic cases are usually considered to be deaths that occurred less than 50 years ago, and radiocarbon testing confirms that is not the case with our mystery man.

Even now, we can still do little more than speculate about who the Mystery Man Under Runway One really was.

Before the new test results, we were limited in speculation as to a year of death.

But radiocarbon testing and other factors now allow us to speculate along a lengthier timeline — from 1790 to 1950 (before the bomb curve).

Consequently, he could still have washed off the deck of one of the 11 steamboats that sank in the mid-1800s near what is now Wheeler Downtown Airport.

Because he was found just inches below a concrete runway poured in the mid-1930s by Boss Tom Pendergast’s Ready Mixed Concrete Co., we can also speculate that he could have been a victim of one of the political boss’ henchmen (but there’s still no evidence he was murdered).

However, at the earlier end of our new post-mortem interval (the 1790s), he could also have been one of the first Caucasians to inhabit the area. Local historians said that means he was likely a fur trader who probably traveled here from the east by canoe or keel boat.

Fur trading with local tribes like the Kansa and Osage was the primary activity of the few Caucasians here at the time, said Bill Worley, a history instructor at Metropolitan Community College.

If that’s what he really was, Worley said, he could have been a member of the Chouteau clan from St. Louis, which controlled the fur trade along the Missouri River through the early 1800s.

In fact, early maps on file in the Kansas City Public Library’s Missouri Valley Room show that our mystery man’s remains were found on or near land that was once deeded to Pierre M. Chouteau.

“I think this is a fascinating find,” Worley said of that possibility.

But it’s only a possibility. Even with the new test results, our man continues to keep us guessing.

From Tools to Assess Risks Yourself, to Understanding How Behavior Impacts Community Spread

One thought on “Update: Looking for the Mystery Man of Runway One”