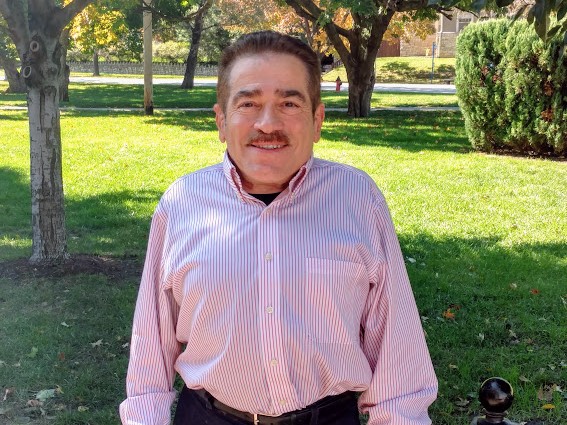 Jim LaManno is a surviving spouse from a neo-Nazi shooting in Johnson County that killed his wife Terri. (Bill Tammeus | Flatland)
Share this story

Jim LaManno can barely remember the first two years after a neo-Nazi murdered his wife Terri at the Village Shalom retirement community in Johnson County.

Oh, he recalls having family support and lots of care from members of St. Peter’s Catholic Church, where he and Terri worshiped.

“I got meals from women of the parish almost every night,” he said. “Another woman came to my house twice a month and cleaned it top to bottom. She did that for like six months. The people of the parish were incredible.”

Beyond that, he’s not sure how he survived.

Teresa Rose LaManno was the third person murdered on April 13, 2014, by a fanatic determined to kill Jews. Earlier that day, he shot Mindy Corporon’s son, Reat Underwood, and her father, William Corporon, at the Jewish Community Center.

Mindy and her family and Jim and his family have had to reimagine their lives because of that violence. Mindy has spearheaded the Faith Always Wins Foundation and the related annual Give Seven Days events.

Jim has cheered her on but hasn’t been as much in the public eye as Mindy.

For Jim, life has meant continuing to work in his dentist’s office on the Country Club Plaza and accommodating himself to the reality that he’s alone now.

“You have to get over the things you thought your life was going to be,” he said, “which, for me, took time” and involved regular counseling.

“For over a year, maybe two (after Terri died), I kept thinking that our planned trip to Italy was still on. I never did make it to Italy. And then you figure out that a lot of these things you did before were with friends who were married. When you don’t have a spouse, it just isn’t the same. So you have to find a new group of people to do things with. That’s the transition I had to make. When work is over, I know that my house is empty.”

An empty house, a broken heart. That’s what demented extremism can and does lead to. It also forces its victims to re-examine what they believe about eternal matters.

“In the beginning,” Jim said, “I probably went to church as often as we always went to church. But since then there have been times when I just didn’t feel like going to church, but I still believe in God. I just feel church can be anywhere that I decide to be.

“I don’t think Terri would want me to walk away from God. That’s why I don’t.”

Then he pauses, sighs and adds this: “But it changed me as a person. I’m not the same person I was five and a half years ago.”

One of the things he and his family (he has three grown children, two daughters and a son) have done since Terri’s death is establish the Teresa R. LaManno Scholarship for clients of the Children’s Center for the Visually Impaired, where Terri worked.

“I’m grateful for what everyone gave me,” Jim said, “so I want to make sure I give back.”

But much of Jim’s life since that day in 2014 when Overland Park police came to his Brookside home with devastating news has been spent figuring out how to put one foot in front of the other.

“You do come to a point in your life where you’d just like to find somebody to do things with,” he said. “Just the little things I used to do that I haven’t done in a while, like taking someone to the movie or to an art gallery, just someone to walk around with. That’s what I really miss.”

Here’s what he would want Kansas Citians to learn from his experience: “I would tell people, especially if you’re married, to enjoy that person. Terri and I never went to bed at night mad at one another. So I would say treasure the relationships you have. People argue and disagree about things, you know, things. I would give up a lot of things — almost every thing — for what I had before. What I had before was much more valuable to me than any thing that I have. Any thing. A person is the most important. We were happy. We were happy with what we had. We were happy with where we lived.”

But that’s gone now. And although Jim is open to the possibility of a new love relationship, he says: “It may not happen. It may happen. I don’t know. If I find someone, I find someone. If I don’t, I don’t.”

The antisemite who caused all this agony no doubt never gave a thought to what Jim LaManno’s life would be like in 2019. All he cared about was hating Jews enough to kill them. Which, of course, he failed to do. Each victim was a Christian.

That, too, reveals hatred’s blindness.