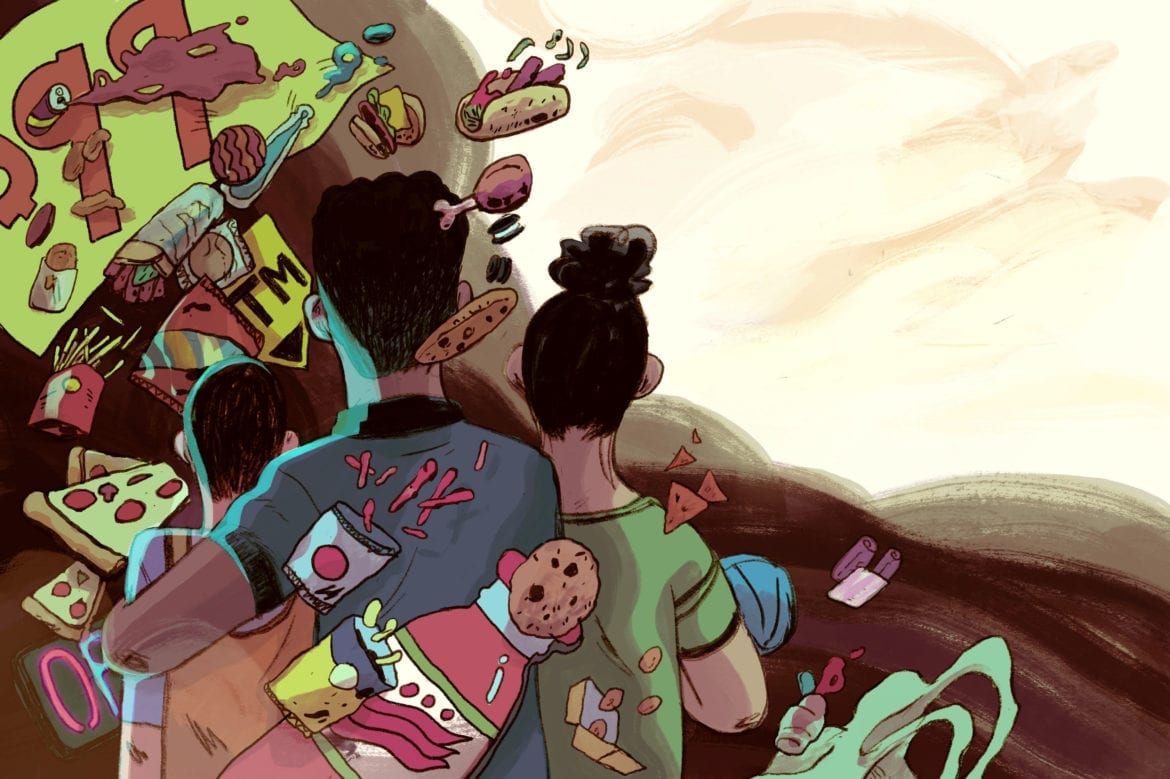 A new book examines how federal government policies made it easier for minorities to open fast-food franchises than grocery stores. Today the landscape of urban America reflects this history.
Share this story

In 1974, McDonald’s set its sights on opening a new franchise in Manhattan’s Upper East Side at the corner of Lexington Avenue and 66th Street. This location wouldn’t be anything like the ketchup and mustard colored buildings in the suburbs. It would be tasteful and blend in with the townhouses surrounding it. Regardless of aesthetics, Upper East Siders were having none of it.

As Chin Jou, currently a professor of American history at the University of Sydney, writes in her new book, Supersizing Urban America, this war between residents and McDonald’s became known as the “Battle of Lexington” in the press. The residents gathered over 11,000 signatures and complained loudly to McDonald’s corporate headquarters. But the death blow for McDonald’s plans came when the Upper East Siders tipped off financial newspaper Barron’s that McDonald’s had overstated earnings to inflate stock value. The company’s stock swiftly dropped by $357 million.

“That did it,” Jou writes. “McDonald’s corporate headquarters threw up the white flag on the Upper East Side.”

But in other areas of New York and throughout the country, residents had less say about which restaurants could open in their neighborhoods. In the 1980s, residents of a working-class neighborhood in Boston who wanted to prevent a McDonald’s from opening — going so far as to protest at City Hall — were ignored. Stories like this have been repeated in poor or working-class neighborhoods throughout the United States, Jou writes.

Jou’s book chronicles how policies put in place by the federal government actually made it easier for minorities to open fast-food franchises in their neighborhoods than grocery stores. Today the landscape of urban America reflects this history. There’s a fast-food restaurant within walking distance in many low-income neighborhoods, but nary a green leafy vegetable in sight.

“African-American consumption of fast food today is not a function of any longstanding preferences for fast food,” Jou told NPR in an interview. She says that it’s a consequence of “targeted relentless marketing,” as well as historic developments like the Small Business Administration loan program and high unemployment rates among African-Americans.

In the late 1960s, the unemployment rate for African-Americans was 5 percent higher than for whites. Jou writes that in 1969, there were 22 million African-Americans in the United States, yet they owned just 163,000 businesses, or 2.2 percent of all businesses in America. Many banks refused to give loans to aspiring black entrepreneurs (an issue that continues today).

The race riots of the 1960s, often sparked by violence against African-Americans, made curbing urban unrest an especially attractive proposition to the federal government. Jou writes, “There were some three hundred riots between 1965 and 1968; the notorious ‘long hot summer’ of 1967 alone saw 176 riots.” There were many factors behind the riots, but the segregation of African-Americans from the country’s post-war prosperity was high on the list.

To rectify the situation, the federal government began pushing the Small Business Administration (SBA) to provide Equal Opportunity Loans (EOL) to minority entrepreneurs. In roughly a decade, Jou writes, the EOL program “disbursed about $25 million in 1,560 individual loans to entrepreneurs opening franchises.” Many of these new businesses were fast-food franchises.

The SBA started providing job training and entrepreneurship programs — many of which also involved fast-food franchises. One three-day conference on urban renewal included a panel discussion on “Developments in Franchising” — an SBA administrator and the president of Dunkin’ Donuts were two of the speakers.

Fast-food companies, which had saturated their original markets of roadside stops and suburbs, needed expansion in order to grow profits. Reaching out to potential African-American franchisees was their roadmap to success. In fact, fast-food companies couldn’t open restaurants in many urban areas without them.

Jou writes that white-owned businesses were frequently seen as unwelcome interlopers in black neighborhoods after the riots: “Recruiting African-American franchisees was seen as a way to mitigate potential conflicts, as well as a means of outsourcing the everyday difficulties and dangers of operating restaurants in inner-city locations.”

Jou quotes Brady Keys, former NFL football player turned franchisee, who put it more bluntly: “They [fast-food corporations] know that doing business in my area is hell. There’s cutting, shooting, killing. So they say, we really don’t want to do this ourselves, so why don’t we get this black cat over here and franchise him?”

But why were fast-food franchisees so frequently the recipients of these SBA loans, rather than grocery stores or independent restaurants? One is that profit margins for fast-food can be as high as 6 percent, compared with 1 percent for grocery stores, as Jou writes. Grocery stores also often require significantly more square footage to operate – space that can be hard to come by in a densely populated area. In 2009, for example, Subway franchisees received $27.7 million in SBA loans from the federal government, whereas all the combined grocery stores in the U.S. only received $4.1 million, Jou writes.

Today the overly easy access to fast food has become a hot-button issue thanks to the obesity crisis. Jou, whose previous work looked at the history of the obesity epidemic in America, was particularly interested in this side of fast food’s story. Many food activists are trying to curb the influence of fast food, including a program in South Los Angeles – adopted in 2008 — that prevented new fast-food franchises from opening.

The Los Angeles Times reported that the LA fast food ordinance “was meant to be part of a larger strategy that includes bringing grocery stores and farmers markets to replace fast-food restaurants. But that part has proven more difficult to accomplish, as LA Councilman Bernard Parks, who co-wrote the restriction, told the paper.

As Jou’s book argues, there’s too little money to be made from groceries and too much risk for business owners in impoverished areas compared with opening an already proven franchise.