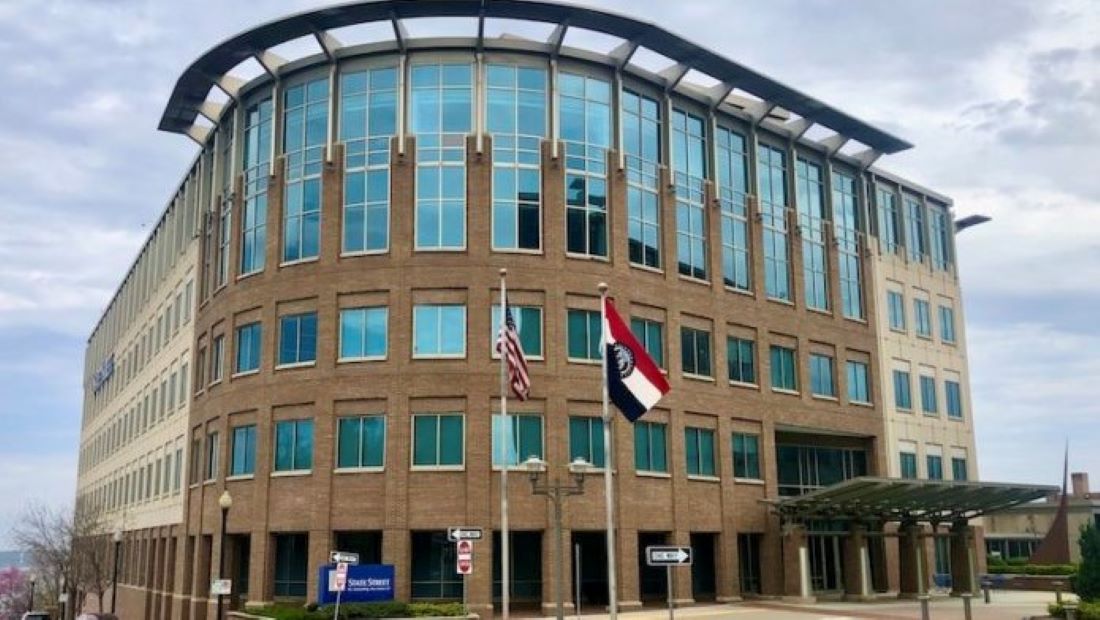 State Street has been at 801 Pennsylvania in Quality Hill since 1995. (Kevin Collison | CityScene)
Share this story

State Street, one of downtown’s larger employers, is downsizing from its Quality Hill home of 25 years to occupy co-working space run by WeWork in the lightwell building at 11th and Main streets.

At one time, State Street occupied most of a 312,000-square-foot, two-building office campus that occupied the entire block between Washington Street and Pennsylvania Avenue, from Seventh to Ninth streets.

The firm is now expected to occupy about 30,000 square feet at the WeWork space. State Street describes itself as the world’s leading provider of financial services to institutional investors.

“We have taken a diligent look at our real estate footprint in Kansas City to ensure that our needs are in line with our shift to hybrid working,” Brendan Paul, a State Street spokesperson, said in an email.

“As part of this analysis, we made the decision and announced to our employees plans to close our office at 801 Penn Ave., while opening a new, shared workspace in downtown Kansas City that is better fit for our new, hybrid operating model.”

State Street did not disclose how many employees would be working at lightwell.

The decline of State Street’s presence may be the latest collateral damage from the sale in 2018 of DST Systems, once a downtown employment powerhouse, to Connecticut-based SS&C Technologies Holdings.

In 1995, Boston-based State Street acquired Investors Fiduciary Trust Co. from DST and Kemper Financial Services, and was persuaded by DST executives to keep and grow its operations in Kansas City.

The firm initially occupied most of both buildings at the Quality Hill campus, totaling about 156,0000 square feet each, that were built in 1995 and 1999 by DST Realty. An estimated 1,500 or more employees may have worked there at one point.

But after its acquisition by SS&C, DST has lost its local clout, shedding hundreds of jobs itself and no longer influencing other downtown businesses.

For example, the former Argus Health Systems, a DST subsidiary, was closed after the sale and its building was recently purchased by Jackson County.

State Street consolidated into 801 Pennsylvania and employed about 1,000 people last year, according to the Kansas City Business Journal.

The building at 805 Pennsylvania is now occupied by two agencies of the U.S. Department of Agriculture transferred from Washington D.C. three years ago, the Economic Research Service and the National Institute of Food and Agriculture.

Despite the consolidation, State Street’s downtown office was described as the second largest in the U.S. after its Boston headquarters by the Greater Kansas City Chamber of Commerce.

State Street is scheduled to be out of 801 Pennsylvania by the end of the year. The property is being marketed by Colliers.

“Luckily for us, State Street renovated it recently and its in great shape. The space sets up well for another headquarters and there’s lots of parking there.”

Private employment in greater downtown, which includes the Central Business District, Crown Center and Hospital Hill, grew 14.7% from 2010 to 2019, according to the latest Census statistics.

Tim Schaffer, president of AREA Real Estate Advisors, is the broker for lightwell and said State Street’s decision to relocate to WeWork space there still was a vote of confidence in downtown. WeWork leases about 96,000 square feet at lightwell.

“Although it’s disheartening to see major employers get smaller, the fact they chose to stay downtown and move into its heart, that speaks loudly,” he said. “They could have gone to Johnson County.”

He observed remaining downtown and moving into more flexible work space will allow State Street to continue to provide the amenities its employees enjoyed in their own building.

“This speaks loudly to how corporate America looks at space these days,” Schaffer said. “They need buildings to provide more amenities so that when they downsize, they aren’t providing less to their employees.”

Paul said State Street, like many businesses, has seen how well its employees adopted to a hybrid work world as a result of COVID.

“This is a tremendous opportunity to reimagine and redesign our workplaces in a very fit-for-purpose way that improves performance, productivity and our employees’ experience,” he said.

“Kansas City continues to be an important market for State Street, and we remain committed to our business lines, the clients we service and our employees who work and live in Kansas City and the surrounding area.”