According to the state-run Xinhua news agency, the Chinese Communist Party has banned its members from joining golf clubs. Additional rules were announced against “extravagant eating and drinking” and “improper sexual relationships,” proving there ain’t no party like a communist party. Because a communist party is lame. The golf clubs in China, however, sound like an awful lot of fun.

Hillary Clinton made her long-awaited appearance at a Congressional hearing on Benghazi. For Democrats, the hearing is a partisan witch-hunt solely designed to hurt Clinton’s presidential campaign. For Republicans, the hearing is an important investigation into dire security failures overseas. Hurting Hillary’s campaign is only a bonus.

In other campaign news, Joe Biden announced that he would not run for president, deeply disappointing Biden’s hardcore supporters. All 14 of them. And that includes Leslie Knope.

The new “Star Wars” trailer was released, and shared on social media by every nerd you have ever known. Each frame was dissected with the meticulous intensity of scholars studying holy writ. According to the Hollywood Reporter, online ticket sales for the film have been record-shattering. The movie doesn’t even come out until December 18.

In other nerd news, according to the security company Fortinet, the mega-popular Fitbit tracker bracelet may have a vulnerability that lets anyone within Bluetooth range hack the device. The hack would load the Fitbit with malware, then infect any computer that syncs with the device. This is moderately scary news for Fitbit wearers. But’s it’s moderately hilarious for everyone that’s annoyed by friends who won’t shut up about Fitbit.

Rep. Paul Ryan agreed to run for Speaker of the House, but only if members agree to a list of conditions. “I cannot and will not give up my family time,” Ryan told reporters. Many, many, many, many pundits pointed out the irony that Ryan has consistently opposed virtually every Federal family leave measure proposed over the past several years. As Politico notes, Ryan declined to sign a bill guaranteeing up to seven days of paid sick leave for workers at businesses employing 15 or more workers and withheld support from a bill that would establish a national paid family and medical leave insurance program.

The Greater Kansas City Chamber of Commerce, along with Blue Cross and Blue Shield of Kansas City, announced a new initiative, Tobacco 21/KC. The campaign seeks to get every municipality in the metro to raise the legal age for buying tobacco from 18 to 21. Because 18-year-olds aren’t mature enough to make important decisions like whether to drink or smoke. They’re only old enough for things that don’t matter, like serving in the military or casting a vote.

Beyond that, as this screenshot from kansascity.com illustrates, there was really only one story that Kansas Citians wanted to follow this week. Take a wild guess… 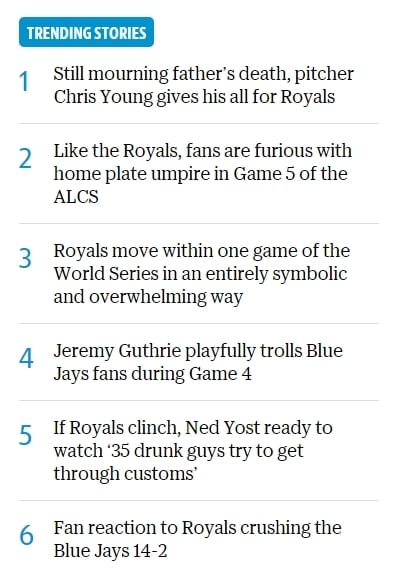