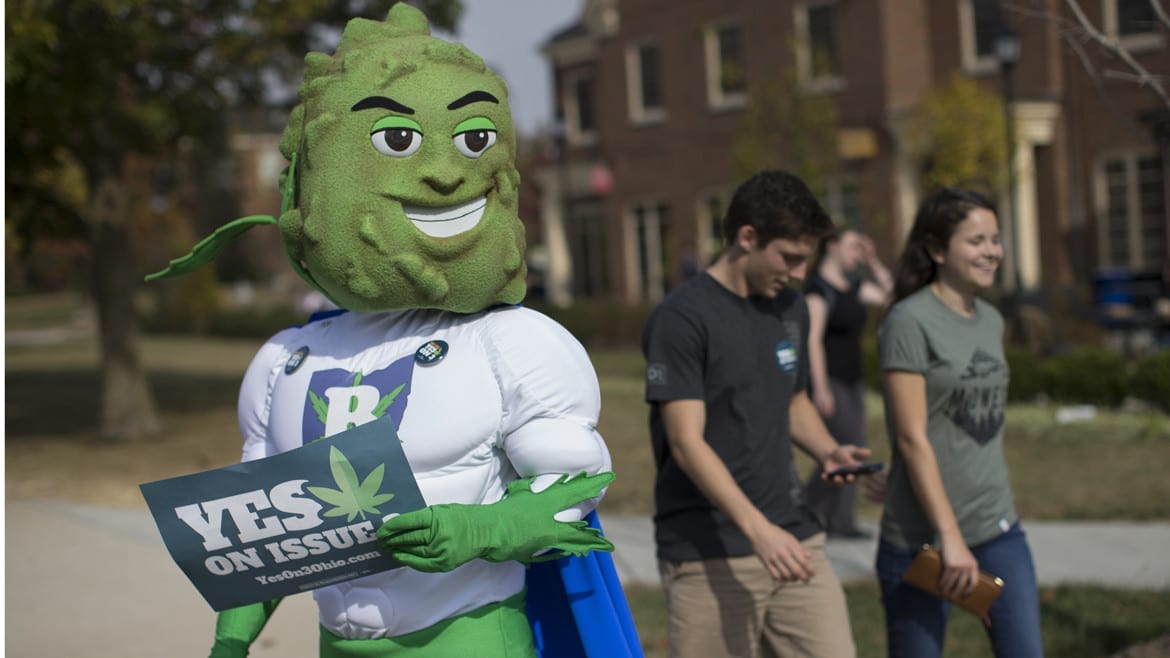 Buddie, the mascot for the pro-marijuana legalization group ResponsibleOhio, greets college students. The smiling green bud's superhero looks drew criticism and some blame for the the failure of a ballot proposal that would have been the first in the Midwest to take marijuana use and sales from illegal to legal for both personal and medical use in a single vote. (Photo: John Minchillo | AP)
Share this story

It was a big week for weed news. Oregon’s legalization laws went into effect with shops racking up roughly $11 million in sales in the first week. Meanwhile in Ohio, a weed legalization effort failed at the polls, at least partially due to concerns about a monopoly on distribution of the drug. (Similar concerns have been raised in Missouri.) Then again, maybe Ohio’s legalization efforts failed because of “Buddie” a creepy, bizarrely inappropriate, leering mascot that was part of the pro-pot campaign.

On the subject of weird cartoons, Houston voters rejected Prop 1, an ordinance that would have banned discrimination on the basis of gender identity and sexual orientation. This cartoon was part of the campaign against the bill. According to the video, Prop 1 would have meant gym owners would “be forced to open to the women’s locker room to anyone who claims a female identity.”

Presidential candidate Ben Carson reiterated his belief that the Great Pyramids were used for grain storage. Pretty much every archaeologist on the planet disagreed with him. Loudly. Carson also claimed that “various scientists” think alien beings helped the ancient Egyptians build the pyramids. None of those scientists could be reached for comment, however, because they had all been abducted by aliens.

Anonymous, an amorphous, leaderless radical hackers’ collective, posted details about hundreds of alleged Ku Klux Klan sympathizers. A different list of alleged KKK members was published earlier this week, which incorrectly outed several US politicians as KKK members. It was quickly followed up by a denial from Anonymous’s official Twitter account. Which begs the question: How can an amorphous, leaderless radical hackers’ collective have an official Twitter account?

One more piece of gum is added to the estimated more than 750,000 pieces in Post Alley in Seattle. (Photo: Alan Berner |The Seattle Times)

Seattle is cleaning one of the world’s weirdest tourist attractions – its famous “gum wall.” An estimated one million pieces of chewing gum — some more than 20 years old — will be steamed off the brick edifice. City officials are still hotly debating a proposed replacement, the booger wall.

Tonight, Hillary Clinton, Bernie Sanders, and Martin O’Malley will take part in a Democratic forum in South Carolina. The debate will be moderated by Rachel Maddow. Oh, fun. Tomorrow night, on the other hand, Donald Trump will host Saturday Night Live with musical guest Cia. Gee… Which one do you think will get more viewers? And people say the GOP is stodgy.

Finally, in Kansas City, a few Royals fans turned up to claim their free breakfast from Taco Bell.

A Flatland Flight of Fancy for 420 Day

Pot And Pregnancy: No Harm Seen At Birth, But Many Questions Remain

A different take on cannabis oil