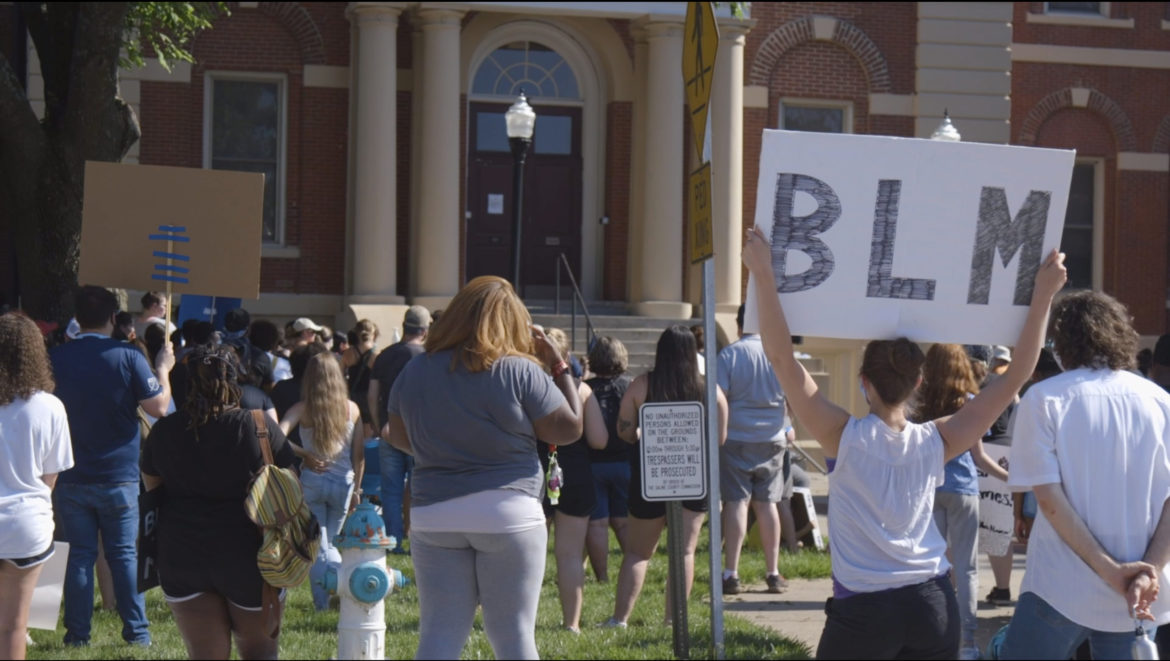 Protesters stand on the north lawn of the Saline County Courthouse in Marshall, Missouri on Sunday, June 7, 2020. The crowd gathered to show support to the "Black Lives Matter" movement sweeping the nation. (Jacob Douglas | Flatland)
Share this story

MARSHALL, Mo. — A statue of a World War I soldier with his fist raised stands triumphantly on the north end of the Saline County Courthouse. Behind it stands hundreds of citizens holding their fists up, not to fight an enemy in another country, but the racism that exists within their own.

But it’s not just folks in big cities making their voices heard. Rural communities throughout Missouri have seen similar protests in recent days. Communities like Marshall, Warrensburg and Booneville gathered together to join the fight against racism in the United States.

Marshall held its protest on Sunday, June 7 outside the Saline County Courthouse. Marshall is home to about 13,000 people: 7% of them are black, 17% are Latino and 71% are white.

Citizens young and old, black and white, spoke out against injustices they see in society. After the speeches, the crowd of about 300 marched nine laps (symbolic of the nearly nine minutes Chauvin had his knee on George Floyd’s throat) around the town square. There were no violent outbursts, and the crowd remained angry, but peaceful.

Powerhouse Ministry pastors Reggie Palmer and Charles Stephenson invoked faith in their speeches, and hit on the importance of the movement reaching America’s rural communities.

“Change must start at the grassroots,” Stephenson said. “In every town, every city, every state, and then ultimately at the federal level.”

NaTisha Palmer helped a group of nine young Marshall residents put together the protest. She worked closely with the Marshall Police Department to make sure the protest went as smoothly as possible. She praised the people in attendance.

Young people played a major role in the protest. Drew Arends, a recent high school graduate, led the march around the town square holding a megaphone chanting, “black lives matter” and “no justice, no peace.”

“Trayvon Martin died on my 10th birthday. I remember watching the news as a child,” Arends said. “I’ve always wondered why people haven’t been as outraged as I was ever since I was a little kid.”

He also voiced the group’s plan to not stop here, but to continue their activism at the polls in local, state and federal elections. The Mar-Saline NAACP branch set up a tent outside the crowd so that people could register to vote.

Palmer noted that while police violence isn’t an issue in Marshall, prejudice against race and class certainly is.

“Marshall is a small town, but like any other place we experience racism,” Palmer said.

There were no acts of violence on Sunday, but there were those of intimidation.

Marshall Chief of Police Michael Donnell said that a couple of citizens with guns stood around the outside of the square. Marshall police made sure to keep them separate from the crowd.

“With an open carry (law) we can’t stop them from doing it,” Donnell said. “But (we were) just keeping them on the outside so they aren’t mixed in with the people who are doing the march.”

Donnell echoed his support for the protests.

“We understand that there is brutality and injustice,” Donnell said. “You have to point out when bad things occur, and when you don’t point out when there’s wrongdoing, then you’re just as at fault for everything else.”

The protest concluded with a prayer, and then a song. Two young men, Jerome Likorio and Malik Evans, led the crowd in singing “Lean On Me” by Bill Withers. After the song, the crowd dispersed peacefully.

Warrensburg is nearly double the size of Marshall with 20,025 citizens. About 82% of the population is white, 7% is black and 4% are Latino.

The protest started around 1:45 p.m. After an hour, the crowd of about 200 people began to march to the town square, then dispersed from there. Both Peacock and Warrensburg police described the protest as peaceful.

“The whole community made it really amazing,” Peacock said. “When I got down there, I just started bawling. I was like, ‘I can’t even get people to come to a birthday party.’ But all of these people showed up for this common goal, and the police officers were amazing.”

Lt. Jeff Reynolds of the Warrensburg Police Department said that the department had a handful of officers on duty that afternoon, and compared their strategy to the approach they take to bar closings.

“We aren’t against the protests,” Reynolds said. “We had protests before. We welcome it as long as they do it peacefully. We aren’t going to instigate anything. We treat it like any other crowd of people.”

Peacock says that the small town stereotype of “everyone knows each other” rings true in Warrensburg, and helped the protest remain peaceful.

“We know the small business owners, we know everybody, so we don’t want to harm,” Peacock said. “We know the police officers personally. There are several officers who we know by name, our kids go to school together.”

Back in Marshall, Donnell echoed this sentiment.

“These are local people that are here to make their voices heard,” Donnell said. “They live here. They work here. They don’t want to tear this up.”

As the crowd dispersed in Marshall, people got into their vehicles, some honked around the square holding up a fist in solidarity. Just outside the courthouse sat the nine young people who put the protest together, a sign that the activism happening in rural Missouri is only just beginning.

Jacob Douglas reports for Kansas City PBS in cooperation with Report for America.

Additional Coverage: For more on rural protests following the death of George Floyd, here is a report from Kansas News Service on a gathering in Garden City, Kansas.