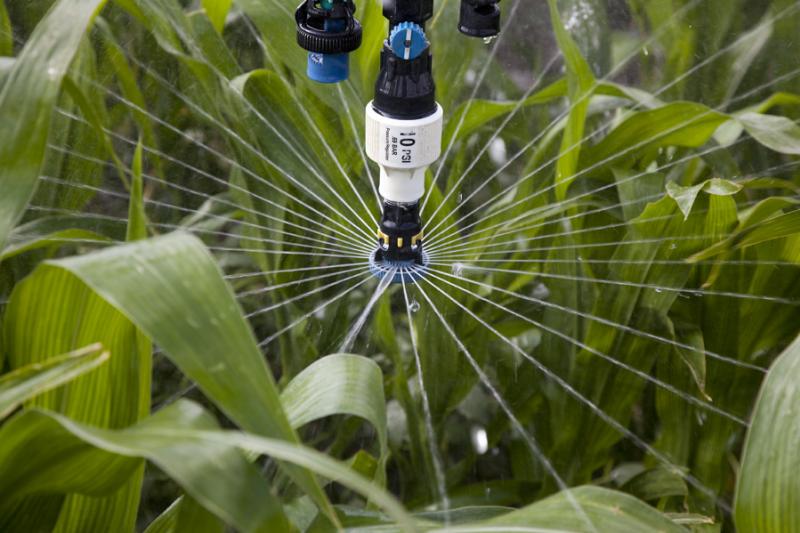 A Kansas irrigation sprinkler does its thing. Water, and our need for its constant supply, continues to be a topic at the forefront of public and political discussions.
Share this story

Editor’s note: Throughout this week, Flatland has published a series of stories from our partner, the Kansas Health Initiative, exploring how people access water, the economics of water and the challenges of drinking it. To find these stories, freelance journalist Sarah Green interviewed more than 50 Kansans in person, over the phone and by email over the course of seven months. For additional reporting and images in this series, go to KHI.org.

What started as a charge from Gov. Sam Brownback to state agency staff to develop a 50-year plan to address water issues may now go beyond that time frame. The Kansas Department of Agriculture and the Kansas Water Office in November 2014 released a “draft vision document” after about a year of public input sessions across the state.

Feedback from stakeholders indicated that the plan couldn’t meet all the needs of local areas. Water issues vary widely, even within various regions of the state. New “regional planning teams” were formed to develop appropriate specific goals related to conservation, protection of water quality and education, to name a few. The latest version of the vision now focuses on “the future of water,” not just the next 50 years.

The next version of this long-term plan is scheduled be delivered to the governor and the Kansas Legislature by January 2016.

Expect this to be an ongoing discussion for decades as the state’s reservoirs continue to fill with silt and other nutrients that contribute to water quality issues such as algae blooms.

Small lakes, including Mission Lake in Horton, have undergone dredging projects in recent years. John Redmond Reservoir in Coffey County is the most visible current project, with a $25 million, 25-year plan to remove sediment from the lake bottom in order to add storage capacity. More than 40 percent of the reservoir’s storage space has filled with silt since the U.S. Army Corps of Engineers built the lake in 1964. The reservoir is an important source of water for the Wolf Creek nuclear generating station outside Burlington, which contributes electricity to the state’s major urban areas.

A coalition has formed to advocate for the construction of an open aqueduct to carry floodwater from the Missouri River to southwest Kansas, where the water would supplement the dwindling supply from the state’s portion of the Ogallala aquifer.

The Kansas Aqueduct Coalition points to a 1982 study by the U.S. Army Corps of Engineers that laid out a preliminary concept for such a project. It would require the construction of a reservoir in the very northeast corner of the state, adjacent to the Missouri River, in which floodwater would be stored. The water would then flow through a series of canals meandering 360 miles across the state — uphill, with the assistance of a series of pumping stations to account for rising east to west elevations. It would then be deposited into a reservoir near the town of Utica, about 80 miles north of Dodge City, according to the study.

The Kansas Water Office and the Army Corps of Engineers released an updated version of the original study earlier this year. It estimated the cost at more than $18 billion for the project, which could take 20 years or more to build. It would cost more than $395 million each year for the electricity to operate the system.

Staff from Groundwater Management District No. 3, the water management district that oversees a portion of the Ogallala (or High Plains) aquifer in southwest Kansas, are the biggest public supporters of the Kansas Aqueduct Coalition, which continues to push for study of the feasibility of the plan. State officials indicated this spring that the project’s high costs could hinder its implementation.

Mandy Cawby, a spokesperson for WaterOne, a water utility that covers a large swath of Johnson County, says her water district is concerned about the possibility of statewide water restrictions.

Water issues in Johnson County are very different than those in western Kansas, she says. WaterOne has made strategic investments in infrastructure over many years to ensure that its customers have “ample” access to water, Cawby says. The district pulls water primarily from the Kansas and Missouri rivers and serves about 400,000 people in all or part of 17 cities in the Kansas City area.

Cawby says she would like to see education efforts related to who uses water in Kansas so that conservation programs can be targeted proportionally to those who use the most water.

“Eighty-five percent of the water is used for irrigation and 10 percent is for people in town,” she says. “Only about 2 percent of municipal water use is for watering lawns. That seems to be the beef if there is one, that it’s not productive to be a turf farmer. I think we are wasting time focusing on lawn-watering, especially when it doesn’t come at the sake of agricultural use.”

An area where she and western Kansas irrigators might agree is their belief that any decisions regarding water use and conservation should be made at the local level.

Some cities, such as Hays and Ellis, have made water conservation a priority for years. Those two cities, for example, have made low-flow water fixtures available to residents for free or at low cost.

Agricultural producers also are making vast investments in technology to use water more efficiently, including refitting massive center-pivot irrigation systems with hoses to drip water onto fields rather than spray it into the air, and sensors implanted into the soil to gain more accurate information about moisture levels.

Of beer, beans and cycling

Five questions with the bean man at Dutchman Coffee Roasters