KC professor talks about the film and his experience in Selma 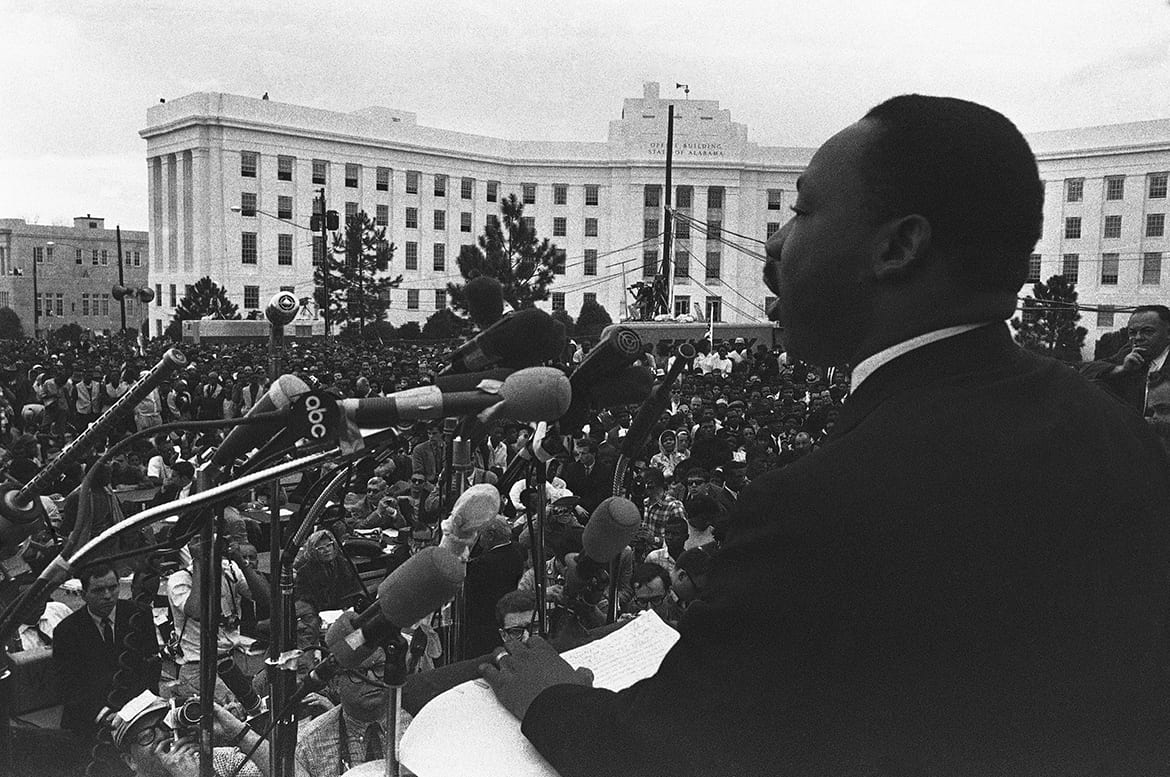 Dr. Martin Luther King, civil rights leader, addresses crowd in front of Alabama’s State Capitol at Montgomery, Ala., on March 25, 1965 as he called for a continuation of the protests against alleged voting discrimination against African Americans. The rally climaxed a five-day civil rights march from Selma, Ala., starting Sunday, to Montgomery. (AP Photo)
Share this story

Tex Sample had no intention of being part of Martin Luther King Jr.’s historic march from Selma, Alabama, to the state’s capital, Montgomery.

In March of 1965, Sample was working in Boston with the Massachusetts Council of Churches, a coalition of clergy that lobbied for civil rights legislation.

Although he was organizing flight reservations for several hundred fellow clergy to join King in a march to protest for voting rights, he was concerned about what might happen if he joined them.

“My folks lived in Mississippi, and I was concerned that if I went they would have some really economic repercussions in my hometown, or that something might happen to them or the house, so I was not going,” Sample said.

But, on March 9, 1965, Sample’s friend and colleague James Reeb, who had gone to Selma to join King for the March, was brutally attacked.

“I remember that Jim went into a coma; he was not killed instantly,” Sample said. “And then when I heard that Jim had been attacked, I knew I had to go.”

Sample had met Reeb just a month before his death, and they talked about issues of social justice over a lunch of dollar meatball sandwiches.

Reeb’s death and the Selma to Montgomery March are both depicted in the film “Selma,” which is currently in theaters and has been receiving both praise and criticism for its depiction of King and the events surrounding the march. 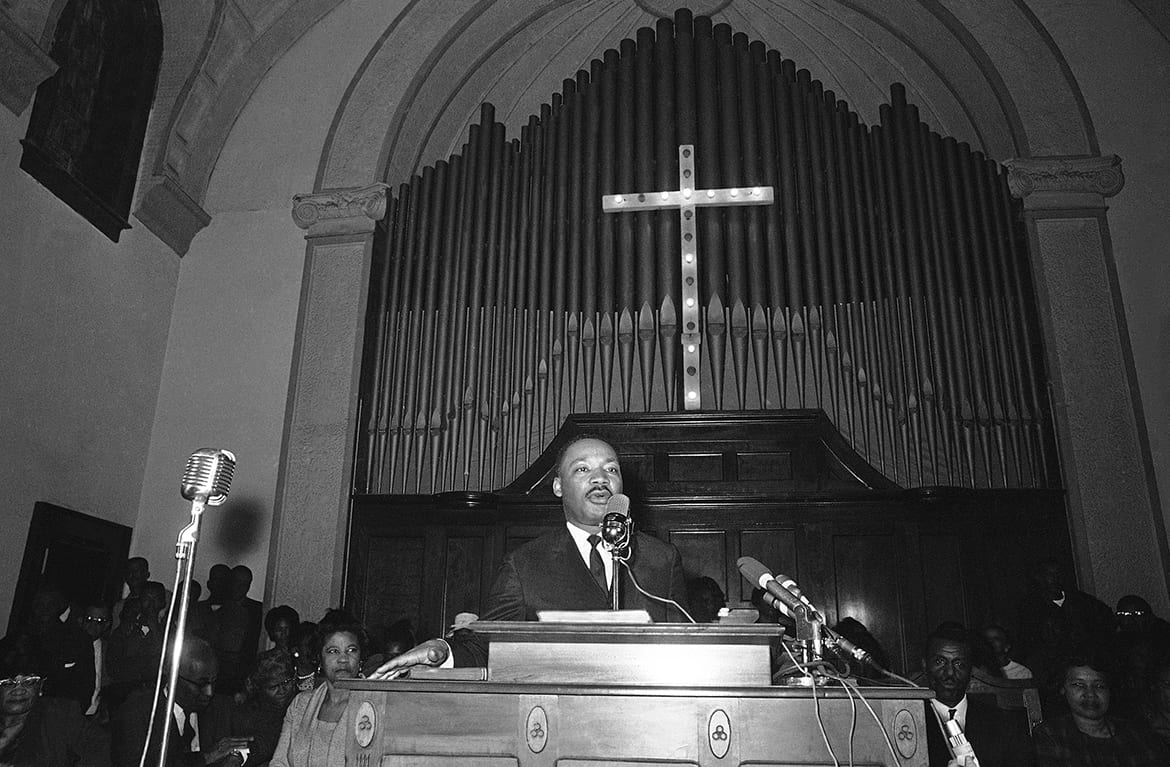 We asked Sample, the retired professor emeritus of Church and Society at the Saint Paul School of Theology in Leawood, Kansas, who demonstrated with King three different times and dedicated much of his life to civil right activism, to reflect on his experiences in March of 1965. His responses have been edited for clarity and length.

When did you decide to get involved in the civil right movement and why?

My real name is Tex. It’s not a nickname. I was named after a black woman, and I think that has something to do with why I had a different feeling about black folk. I don’t really understand how it affected me, I just know that it gave me a different… I felt bad about what I saw happening. My dad had been born in east Texas in 1904, and his mother’s milk was not good. There was a black woman down there by the name of Texanna Gillham, and she suckled my daddy as an infant. Now that’s one of the contradictions of the south: sharp segregation but a black woman can suckle a white kid.

I arrived at Boston University to earn my Ph.D. two years after King had finished his dissertation. When I got there in the fall of 1957, it was just full of Martin Luther King Jr. We talked about him everyday.

Oh, my. Well, I had finished Boston University with a Ph.D. in 1964. I went to work with the Massachusetts Council of Churches. I was what they called the director of social relations, which meant I was their lobbyist in the legislature …. and as soon as I am on the job, I learn that we have a civil rights bill coming and that we wanted the Council of Churches to be intimately involved. So I hit the ground in a dead run. Those were the hardest years of my life, I would say in terms of work and no sleep. Now let me say this, they were also some of the very most exciting years of my life. You really felt that if you could get the civil rights act passed and the voting rights act passed that you would really change this country forever. Now, at the time, I would have never dreamed that 50 years later that we would still have so much to do with racism. 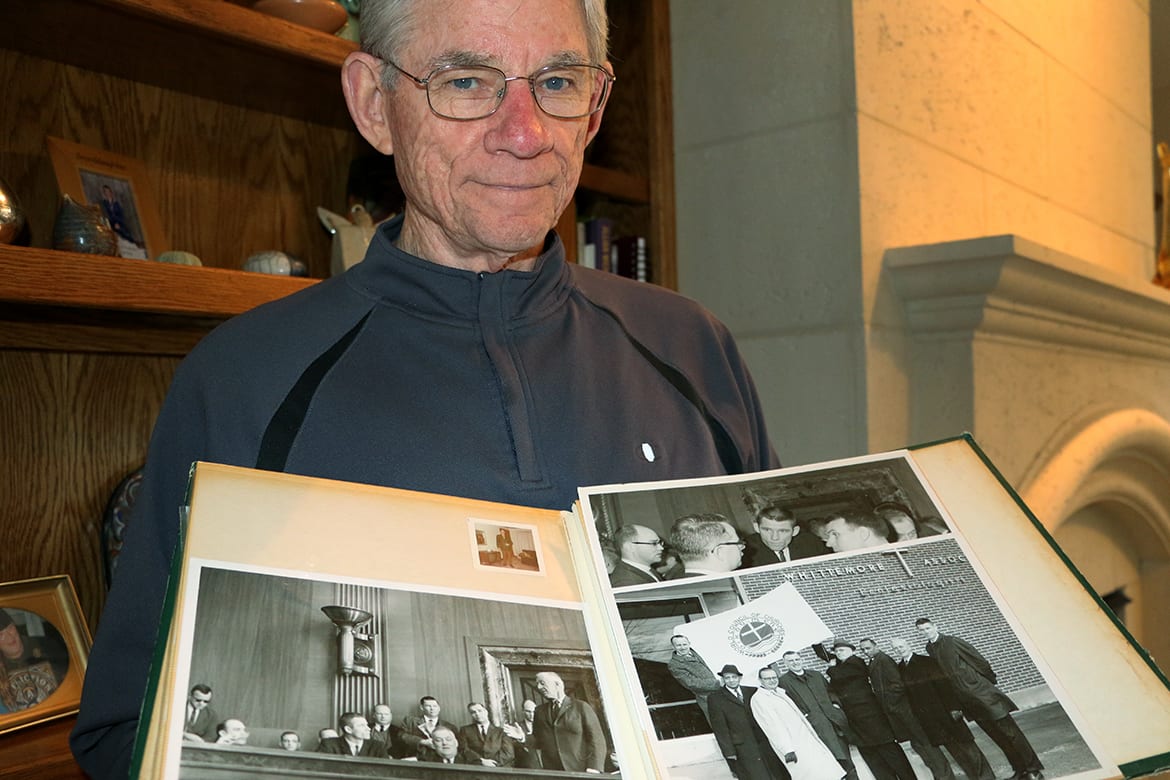 When you learned that they were making a film about Selma what was your initial reaction?

Well, I was glad, and I had wondered why one had not been made before. Why has more not been done with Martin Luther King Jr.? I mean he’s got to be one of the greatest men of that century. I think you can arguably say that he is the greatest American of that century. Who has done as much as part of a massive movement of change as he has?

What are your thoughts on the film?

The thing that bothered me the most about the film really was that they did not use King’s speech at the end (after the march arrives in Montgomery). That was a great speech. I would put that speech right up there with the March on Washington speech. There were 30,000 people there, and it was largest civil rights demonstration in the history of the south up until that time. We were sitting on the ground waiting for him to bring it. Toward the end of that speech he started doing a (call and response) of “How long? Not long.”

He said, “How long? Not long, because you will reap what you sow.”

“How long? Not long, because the arc of the moral universe is long, but it bends toward justice.”

And then he just shouted at us, “How long?” and people responded, “Not long!” I mean it was just this uproarious thing and that whole crowd got up off the ground. That was such a powerful moment for me.

And then he just shouted at us, “How long?” and people responded, “Not long!” I mean it was just this uproarious thing and that whole crowd got up off the ground. That was such a powerful moment for me.

And I understand that there is a real problem with getting access to King’s speeches for that kind of a purpose, but, gosh, I would think Oprah could do it! So you just don’t get the power of that speech at the end of the movie, because they didn’t use the speech.

Weighing historical inaccuracies with the power of the film as a work of art, what role do you think the film plays?

I think the film is very good at depicting the kind of personal struggle and relationships that (King) had. I mean the bus boycotts began in 1955, and he was killed in 1968. That 13 years that the man was under pressure every single day. He was under threats all of the time, and I don’t know how he sustained himself.

On the soundtrack, Common and John Legend talk about Ferguson. How do you connect the events of 1965 with today?

We have a very serious problem in this country. One of the most powerful comments that I’ve heard is that when they left that young man in Ferguson lying on the ground for over four hours that that had some of the same kind of symbolism that lynching had. You know in the south they would hang these people up, cut their genitals off and put them in their mouths and let them hang there sometimes for days. And you get the point. The point is, ‘You’re next.’ I don’t how you can leave a young kid or anybody lying in the street for four hours. I mean, that’s a message.

If your 1965 self imagined 2015, where did he think we would be now in terms of issues of social justice?

What we hoped was that it would really be a just society. The prejudice, the discrimination, the segregation would have been gone. The wages would be living wages. Education would be good, so that we would really be teaching children and growing children to be the kind of people that they’re called to be. There would be medical care for everyone, and there would be an organized citizenry continually working for the common good. The common good is not something we know ahead of time, and it has to be hammered out. I think one of the problems right now is that, today, the citizen has become a consumer, and if we don’t reverse that we won’t celebrate the common good. I had hoped that the (civil rights) movement might turn into a very broad, national work of organized citizenry.