Above image credit: The existing Buck O'Neil Bridge is scheduled to be demolished in 2023 as part of a $220 million bridge replacement project. (Courtesy | MoDOT)
Sponsor Message Become a Flatland sponsor

The prospect of converting the old Buck O’Neil Bridge to a linear park is “bleak,” according to a feasibility study that determined the proposal would cost $100 million, double the original estimate.

The report also found that even if funding can be identified, significant parts of the 65-year-old span over the Missouri River would have to be removed, including piers supporting its downtown approach and one of its distinctive arches.

“I don’t know if the (City) Council will vote to come up with $100 million,” said Mario Vasquez, assistant city manager. “Knowing what I know, it looks pretty bleak.”

The study was commissioned by the city last spring and funded with $300,000 from the Missouri Department of Transportation (MoDOT). MoDOT is currently building a $220 million replacement for the O’Neil Bridge that is expected to be completed in fall 2024.

The $100 million construction price tag in the report prepared by Burns & McDonnell did not include the future costs of maintaining the steel-truss bridge, and operating the park and programming activities.

“The biggest issue is money and how to support keeping the bridge and also programming and maintaining it on an ongoing basis,” said John Fairfield, a former City Council member and chairman of the Downtown Council Infrastructure Committee.

“I can’t imagine that privately that kind of money is available and the city has to make a budget.”

Vasquez said the city recently received a draft of the report and it is expected to be submitted the City Council later this month. The project has been described as a “top priority” for the city by Councilman Eric Bunch.

The proposal also has been championed by city planners and downtown advocates seeking more green space. It has been compared to the High Line in New York City, a linear park atop an old railroad bridge that runs 1.5 miles in Lower Manhattan.

The High Line was completed in 2019 at a cost of about $250 million, much of it from the city along with significant fundraising by the Friends of the High Line, a nonprofit group.

The structure is owned by the city, but the park’s ongoing funding and management is handled by the High Line nonprofit organization.

The O’Neil Bridge park concept has been handicapped from the start because of the design requirements of its replacement. MoDOT said the northernmost arch of the three-arch structure has to be removed to accommodate the new bridge.

Even with that north section removed, however, the bridge surface would have 80,000 square feet available for a linear park.

But Vasquez said a previously unknown MoDOT commitment to the railroads has further complicated the proposal.

“The railroads want the piers removed under the approach to the bridge, before the arches begin,” he said. “It was commitment made by MoDOT as part of the new bridge plan to remove them.”

Union Pacific uses a major railroad corridor running along the south bank of the river and beneath the O’Neil Bridge, and Vasquez said the railroad wants the piers out of the way to improve the alignment of the tracks.

The Buck O’Neil park proposal also is competing with other big ticket items at City Hall, notably rebuilding Barney Allis Plaza, a city-owned asset. That cost has been estimated at $112.5 million and the funding has not been identified.

And there is a $160 million proposal to deck a four-block stretch of the Interstate 670 freeway with a park. Backers of what’s called the South Loop Link will be seeking funding help from the city as well as the state and federal governments.

The clock is ticking with MoDOT. The agency has budgeted money to demolish the old Buck O’Neil Bridge next year if the city decides the linear park concept is not doable.

“MoDOT wants an answer from us,” Vasquez said. “Are we going to save this? If not, MoDOT has to proceed with its plan for removal.” 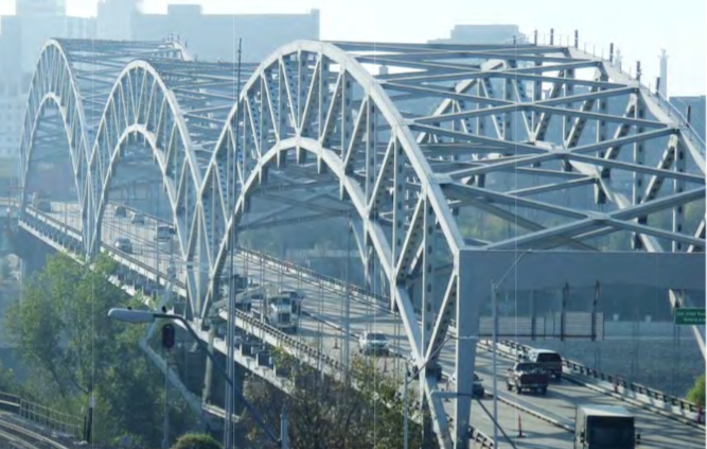 Converting Buck O’Neil Bridge to Linear Park ‘Top Priority’ for City Officials A proposal to convert the old Buck O’Neil Bridge into a linear park with dramatic downtown views is being described as a top priority at City Hall, but key questions remain about its ownership, cost and operation.