One Professor’s Quest To Collect Every Video Game Soda Machine 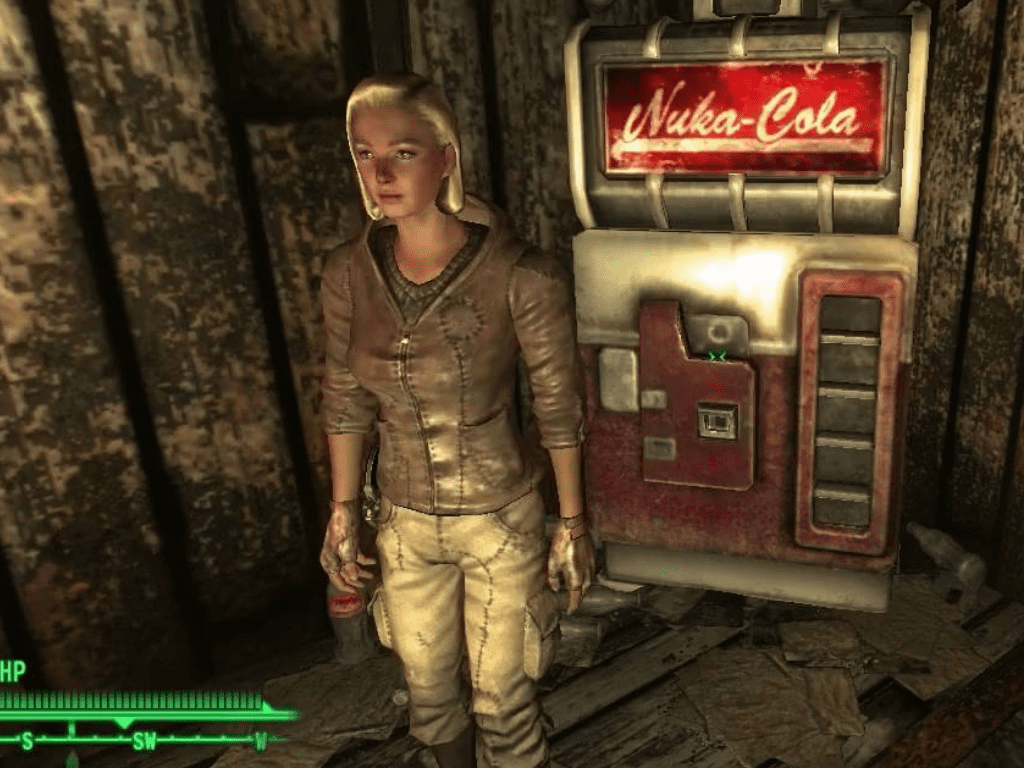 A screenshot from the video game Fallout 3 of a character standing near a Nuka-Cola machine. Soda machines appear in video games a lot more frequently than Jess Morrissette expected, so he decided to document this phenomenon. (Photo: @decafjedi)
Share this story

It’s a hot day in the nuclear post-apocalyptic wasteland, and you’ve spent all afternoon fighting off mutated zombie creatures. What you probably need right now is a nice, cold soda.

Chances are, if you’re playing a video game, there’s some sort of soda machine right around the corner. Jess Morrissette has the evidence to prove it.

Morrissette, a professor of political science at Marshall University in Huntington, W.Va., began a project collecting screenshots of soda machines in video games. In just two weeks, he found close to 250 appearances, from the ubiquitous “Nuka-Cola” in the Fallout series to Grand Theft Auto’s “Sprunk” and Hitman’s “Fountain View.”

The project started while Morrissette was playing the game Batman: Arkham Knight, when he stumbled across one particularly colorful soda machine — a rare bright spot in the darkness. He posted a screenshot to Twitter from his personal account, and then went digging in his personal video game collection to track down others.

Soda machines, he found, were everywhere.

“I’m a firm believer of the idea that repetition makes things funnier, and at this point we’ve certainly tested the limits of that theory,” Morrissette says.

As other Twitter users started submitting their own discoveries — in games like Half-Life and Pokémon — Morrissette found some links between the machines.

“Some of the soda machines are there for mechanical purposes. They dispense health or something,” Morrissette says. “Others are meant to be a pop of color in an otherwise drab game.”

Soda machines, Morrissette says, are instantly recognizable in both form and function. And for game designers, they’re relatively easy to render but provide a dose of realism, signaling that this virtual world is one similar to our own — even more so than, say, toilets.

“In a word, they’re a shorthand for modernity,” Morrissette says.

Depending on the context, however, such modernity can turn humorous or disturbing. Soda machines, he has found, are particularly prevalent in games about the apocalypse or the dystopian future, in part because of the contrast they provide.

“The one that jumps to mind there is the Nuka-Cola brand from Fallout, at least for me,” Morrissette says.

Nuka-Cola, in the Fallout universe, was the world’s most popular soft drink before the nuclear war that sets off the beginning of the games. It’s a motif that connects every iteration of the series, as well as the upcoming Nuka-World expansion (set in a Nuka-Cola theme park) and the real-life Nuka-Cola Quantum drink sold at Target.

“In popping up through the series, I find it to be an interesting commentary on what survives after a massive nuclear holocaust,” Morrissette says. “Well, we have soda machines still, and we have the soda still in them, and some of the soda is now radioactive but it’s still worth collecting.”

Like a Twinkie or a cockroach, a bottle of soda seems like it could withstand the meltdown and the years to come. It may lose some carbonation, sure, but no amount of mutation could make it any less sweet.

In the same sense, soda machines act as a stand-in for capitalism and mass consumerism in general. When the rest of the world has been destroyed, often literally, these objects function simultaneously, in Morrissette’s words, as “an artifact of the pre-war society” and an “item of nostalgia.”

That’s not too different from how soda is often promoted in contemporary life, linking nostalgia for the past to today’s consumption. “If you think about the way that Coke, through its branding, has tried to wrap itself up in the idea of: This is American life and American history,” Morrissette says.

Grog is great and all, but have you tried New Grog? pic.twitter.com/47t1idGAO0

And, in fact, contributors to the soda search project have found that Coca-Cola and a few other brands do appear in video game soda machines, as product placement, though more often than not, the machines are simply marked “Cold Drinks” or something similar.

Morrissette — an amateur game designer himself — says he prefers when video game designers have fun with the names of their sodas, such as the aforementioned Sprunk and Fountain View (parodies of Sprite and Mountain Dew, for the pop-illiterate), or even more ridiculous labels like “Frudo: Lord of the Drinks” or “Grog.”

With such a large database at his disposal, Morrissette has started thinking about what this project could become in the future, once he can start putting numbers to the trends he suspects.

“As someone coming from the perspective of a political scientist, when I see a large database I start thinking about how I can analyze that data,” Morrissette says. “It wouldn’t be the first time a journal published something about the most minute of minutiae.”