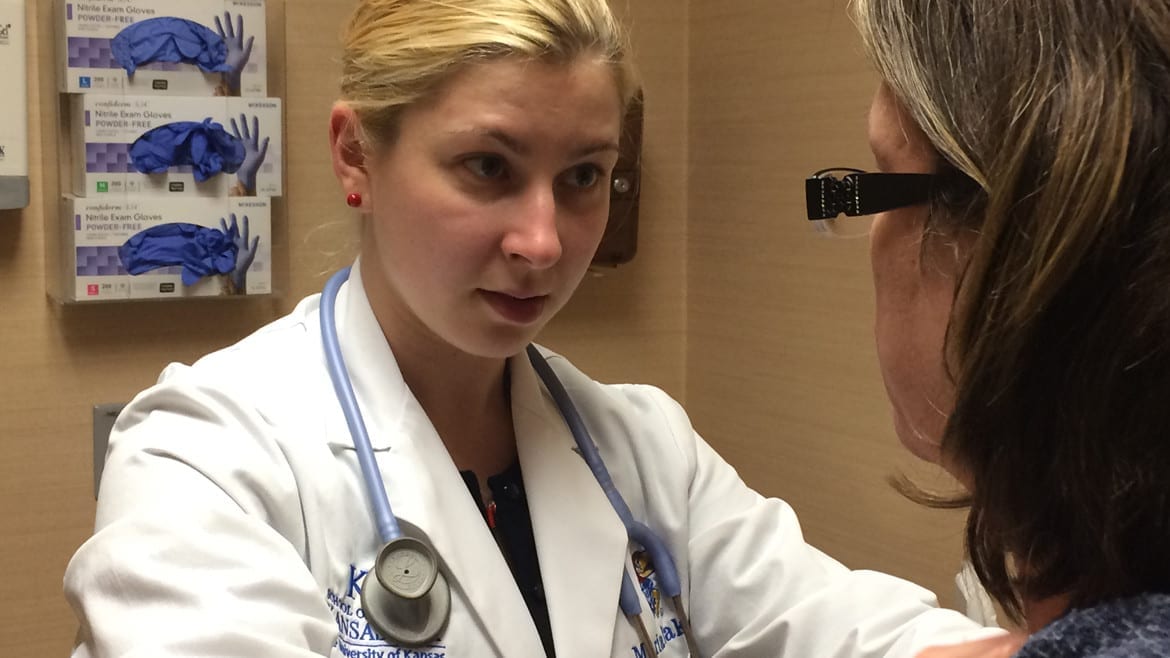 In our “Crossing To Health” series, we explore that health divide this week and look at attempts to narrow the gap.

On a Sunday morning, New Bethel Church in Kansas City, Kansas, comes alive with the sounds of worship as a full gospel choir and band bring hundreds of congregants to their feet.

At the center of the action, guitarist Clarence Taylor sits with his eyes lowered, strumming angelic-sounding chords. Taylor has a sound that would put a lot of hot-shot guitarists to shame, but he doesn’t claim the talent for himself. He says it’s a divine gift.

“I don’t know the notes,” Taylor says. “I can just pick it up. Sometimes it amazes me.”

The 61-year-old owns a janitorial business, and his income can be unpredictable. For years, instead of buying health insurance and seeing a regular doctor, Taylor paid for health care out of pocket when emergencies arose.

But with the help of the church’s community health director, Broderick Crawford, Taylor was able to get subsidies and insurance and connect with primary care doctors and nurses to treat his diabetes and heart issues.

“God has hooked me up with the right people,” Taylor says. “So I’m glad.” 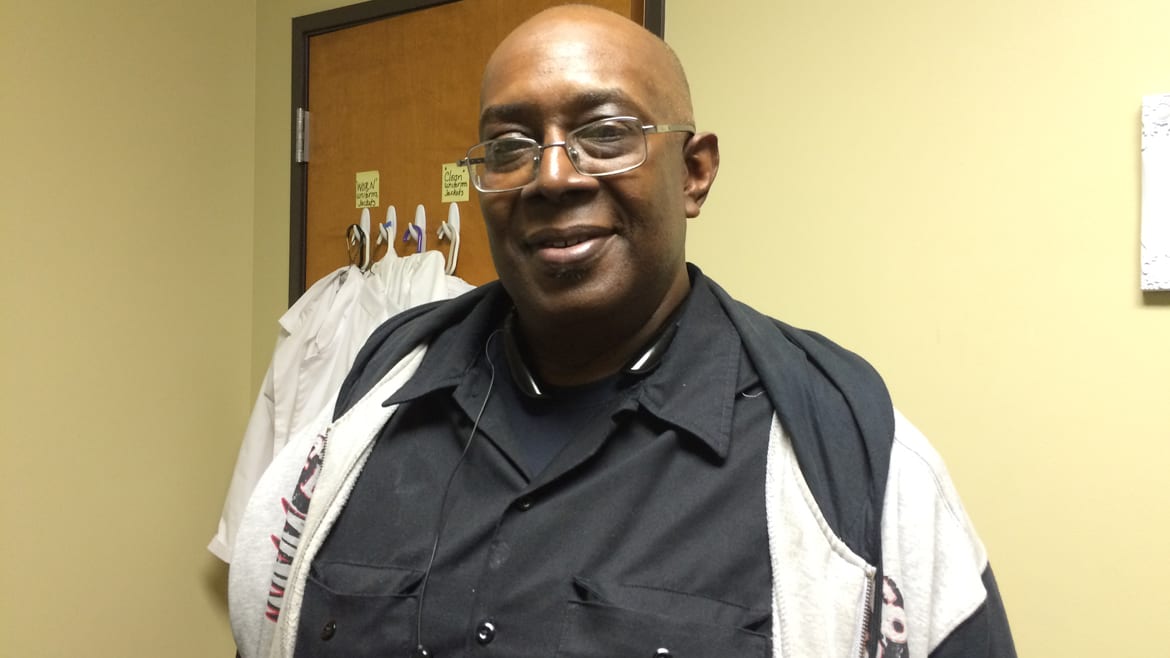 RELATED: To find out more about how New Bethel Church is working to improve its congregants’ health, listen to this interview with the church’s community director, Broderick Crawford

The ‘right people’ can be hard to find in Wyandotte County. In the past couple of years, the Affordable Care Act has provided thousands of residents here with health insurance, creating a surge in demand for health care in a county that had already been designated a Health Professional Shortage Area by the federal government.

The heightened demand won’t suffice to lure more physicians. Rather, the future of the county’s health workforce is more likely to be shaped by the decisions of those very fresh-faced medical students at KU Med about to embark on their careers.

On a Monday evening at the JayDoc Free Clinic in Kansas City, Kansas, second-year students are learning some of the basics of family medicine. They perform routine physicals, treat pain and, with the guidance of a supervising physician, address other health issues that patients report.

It’s an eye-opening experience for Adam McCann, one that will help inform a decision he’ll have to make soon: what kind of doctor he wants to become.

“It’s definitely something that’s on our minds from day one,” McCann says. “It’s just trying to delay the big decision until later.”

Family and internal medicine pay an average of about $190,000 a year. That’s a great living by most standards, but it’s at the bottom of the pay scale for doctors. Specialists in orthopedics or cardiology typically make twice as much.

And as students like Hailey Baker consider a debt load that averages about $180,000, the pay difference is hard to ignore.

“That is something I think about, because it is just insane how in debt I’m going to be,” Baker says.

Once students like McCann and Baker become doctors, money will likely play a big part in where they choose to work.

Private insurance pays doctors much more for treating patients than Medicaid or Medicare. With plenty of privately-insured residents, Johnson County almost guarantees a good salary. Not so in Wyandotte County, where there are far fewer privately-insured patients.

And that situation will probably only get worse as politicians and insurers try to rein in spiraling health care costs.

Student Maddy Breedan says that adds another element of uncertainty when it comes to choosing a career.

“It is a little bit worrisome sometimes, just with things changing so rapidly and kind of not knowing what the direction is,” Breedan says.

To lure more primary care doctors to Wyandotte County and other areas deemed medically needy, Kansas and the federal government have adopted loan forgiveness programs. And while these programs have attracted some doctors, the overall problem in Wyandotte County remains stubbornly the same. 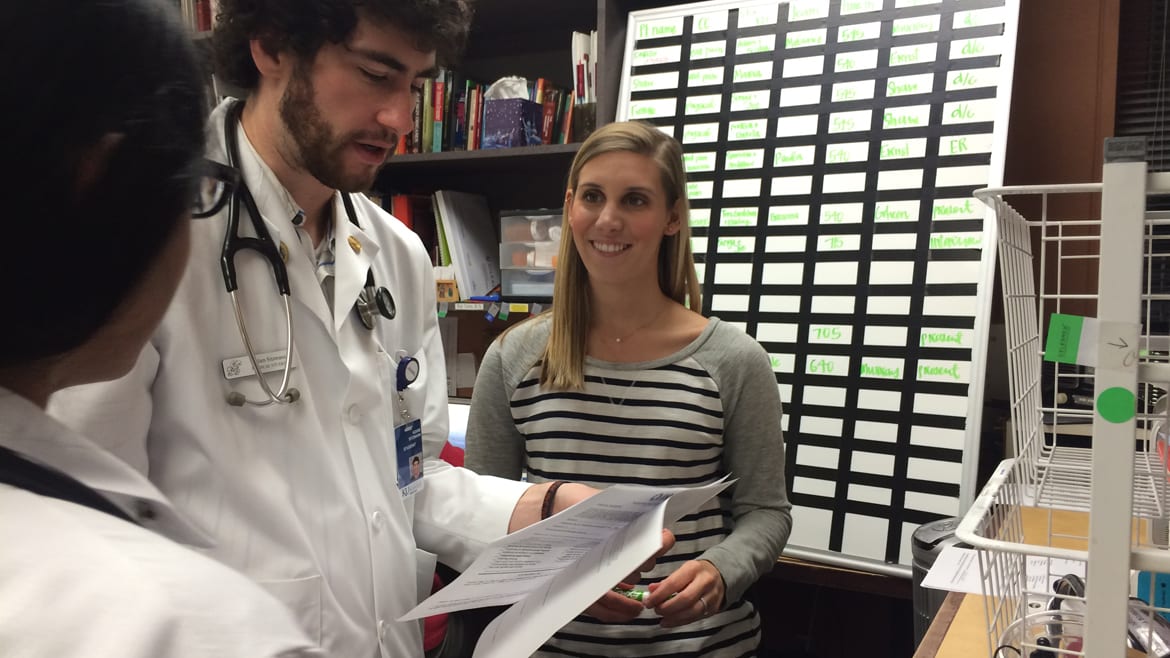 The solution, according to Professor Erin Fraher of the University of North Carolina at Chapel Hill, may be to appeal more to the heart.

Fraher says medical schools need to get students out of the classroom and hospital and working in communities like Wyandotte County as early as possible. Doctors can be inspired to a higher calling if there’re exposed to it before financial incentives take hold.

“When they put their students out into these underserved communities, medical students become excited about serving these patients,” Fraher says. “We know then that they can pursue a residency in a community where there’s greater need.”

Sounds good in theory. But even for doctors who have a passion for it, the work isn’t easy.

Many of the patients Lee sees have complicated health issues and even messier lives characterized by poverty, unremitting work demands, lack of transportation, and emotional issues, among other problems.

It’s common for patients to simply fall off the radar.

“It feels very much like failure,” Lee says. “It’s hard when you have a person that you believe you have some way of helping and then they don’t follow through. It’s hard.”

More than two-thirds of doctors who chose family medicine say they wouldn’t do it again, according to surveys conducted by the physician news source Medscape.

To support the work of primary care doctors, Fraher says communities need people to look after patients after they leave the doctor’s office.

“You need to build a team around them,” she says. “You need social workers. You need community health workers to help translate what the physician says to the patient and help them be adherent.”

In fact, community health workers – often non-professionals who help coordinate care in their own communities – have become more common in Wyandotte County in recent years.

El Centro, for example, began enlisting volunteers in its Promotoras de Salud program in 2009 to provide outreach for Spanish-speaking residents.

And new grant funding, like last year’s award of $1.6 million to the Community Health Council of Wyandotte County from the Centers for Disease Control and Prevention, supports the creation of more of these workers.

Even so, the data suggest the mismatch between available doctors and patients is getting worse.

So even though Wyandotte County’s uninsured rate is falling and the county is providing more to help the newly-insured, many residents will likely have an even harder time finding basic health care.

Clarence Taylor, the guitarist who received assistance through his church, says he can understand why that would leave residents feeling somewhat desperate. He remembers the sensation well.

“That’s when you really start praying,” he says. “Saying,‘God, you’re gonna have to help me, cause I don’t know who to talk to.’”

Some Therapists Say Yes, But It Can Be Complicated