Here’s What Trump Missed About Violent Crime in Kansas City

Police know they can’t arrest their way out of the problem. So what works? 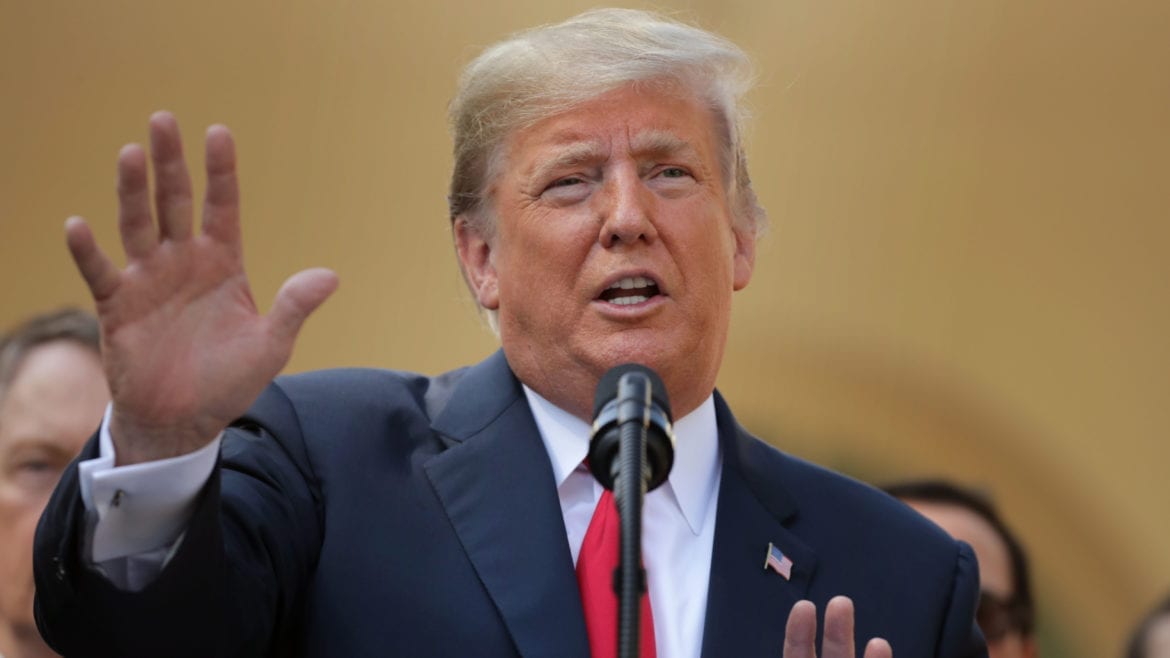 It was a week of political intrigue in Kansas City.

Trump’s speech closed a nationwide U.S. Department of Justice conference for federal, state and local law enforcers at the The Westin Kansas City at Crown Center. His remarks to attendees capped other keynotes by the trio of men who earlier that morning were locked in a virtual game of musical chairs as they vied for the job of U.S. attorney general.

The political drama over who would become the nation’s top cop overshadowed the purpose of the conference itself: rebranding a $50 million federal program called Project Safe Neighborhoods. It’s intended to narrowly focus on the nation’s most violent criminals — the people who unleash murder and mayhem through drug trafficking and guns.

It’s a concept of policing that’s long been embraced in Kansas City with mixed results. Kansas City, Missouri, ranks among the nation’s most violent metros, fifth in a 2017 study of homicide rates.

Although violent crime appears to be declining in Kansas City and elsewhere around the nation in 2018 compared to last year, 120 people had been murdered this year by the time Trump spoke at the Crown Center. All but a handful died by gunfire.

Another 400 people had been shot but managed to survive as of Nov. 25. That’s a statistic many departments don’t track, much less use to help determine when a shooting might lead to retaliation so authorities can intervene before more carnage occurs.

More than 700 law enforcement and others attended the Project Safe Neighborhoods conference, including all 93 U.S. attorneys, many of the area’s chiefs of police and their top commanders, criminologists and federal agents from the so-called alphabet agencies like the DEA, ATF and FBI.

They largely weren’t concerned with the palace intrigue in Washington, or even if Trump deviated from the truth in his remarks. (He did.) These were career law enforcement. They see presidential administrations, as well as ambitious mayors, governors and state legislatures, come and go.

By the time the president took the stage, conference attendees had already spent three days focused on leveraging a new infusion of federal dollars into their existing and planned anti-violence efforts.

Project Safe Neighborhoods was launched nearly two decades ago when former Missouri Gov. John Ashcroft was the nation’s attorney general. But it wasn’t a priority under the Obama administration and its status slipped.

The initiative sounds great in theory: Go after the most violent offenders and recognize that a small portion of the population — anywhere from 2 to 6 percent — commits the most violent acts. For the Kansas City region, Project Safe Neighborhoods 2.0 could help fund the work of a new strike force in 2019 of combined local law enforcement and federal agents.

That type of approach is not new here. In fact, law enforcement at the conference mentioned that a strength of this area of the country is the cooperative nature between departments. The camaraderie and familiarity, even among differing agencies, was apparent during the conference.

“There are federal agents and detectives working together everyday in the Kansas City area,” said Kansas City Deputy Chief David Bosworth. “They partner up and they go out.”

There are nonetheless inherent challenges. Geography is one of them. Interstates 35 and 70 pass through the area, and it’s a big reason for the drug trade here. That fact was stressed by both the U.S. Attorney for Kansas, Stephen McAllister, and his counterpart, U.S. Attorney Timothy Garrison, for the Western District of Missouri.

In recent months, federal agents have seized hundreds of pounds of marijuana out of new cars that had been manufactured in Mexico. The cars were passing through Topeka, Kansas, on rail lines, but not before criminals broke into them, retrieving the drugs. They knew exactly which cars to hit and where the drugs were hidden, McAllister said.

Another matter is powdered cocaine that’s being pushed on drug dealers by their suppliers.

Colombia has started to produce more cocaine, and it’s seeking to create a bigger market for it.

Repeatedly, police and prosecutors talked about how guns and the drug trade are linked. The newly created Midwest Crime Gun Intelligence Center, which feeds into the National Integrated Ballistic Information Network, has been called a game-changer for detectives. A boost in federal funds might help it to expand.

Evidence gathered at shootings is analyzed, and feedback that once took months, arrives within days. That’s crucial, because guns can change hands quickly. Delays lessen the chances of law enforcement to tie the right criminal to the right crime and stop someone from shooting again.

Both Garrison and McAllister, the two top federal prosecutors for Kansas City, have staffed up with new deputy prosecutors in recent months, part of a nationwide escalation. McAllister said he’s still shuffling funds to add yet one more to his Kansas City, Kansas, office.

Finally, the Kansas City No Violence Alliance, a signature crime prevention program, will undergo a shift in focus intended to sharpen its ability to drive down street violence.

“End of the day, we are judged on the numbers,” Jackson County Prosecutor Jean Peters Baker said of the area’s high recorded rate of violent crime. “We own it.”

The Kansas City No Violence Alliance dovetails with Project Safe Neighborhoods. It operates in many of the same ways, such as using available research and information to pinpoint who is committing most of the violent crime.

Law enforcement is proficient at tracking murders, arrests, prosecutions and shootings, said Ken Novak, a professor of criminal justice and criminology at the University of Missouri-Kansas City. He’s worked with the No Violence Alliance since its inception and said that what’s more difficult are meaningful assessments of whether that work is actually making communities safer.

Speakers at the conference stressed that growing the prison population is not the goal. Police cannot arrest their way to lower crime rates, not without the help of the neighborhoods they police. Cooperation with the community is crucial to the mission of the No Violence Alliance and Project Safe Neighborhoods.

A strong thread of the conference, reiterated in Trump’s own remarks, was that the U.S. Department of Justice “had the backs” of the nation’s law enforcement. Not mentioned, but implied, was the criticism of controversial police shootings and the Black Lives Matter movement, which have dramatically heightened the nation’s focus on fairness and tactics.

Community buy-in is the balancing partner to all of these new efforts. And ultimately, it’s what will determine success or failure, no matter how many federal dollars are spent.

Former Inmates Are Often Locked Out of the Job Market