To Preserve the Species, Eat It 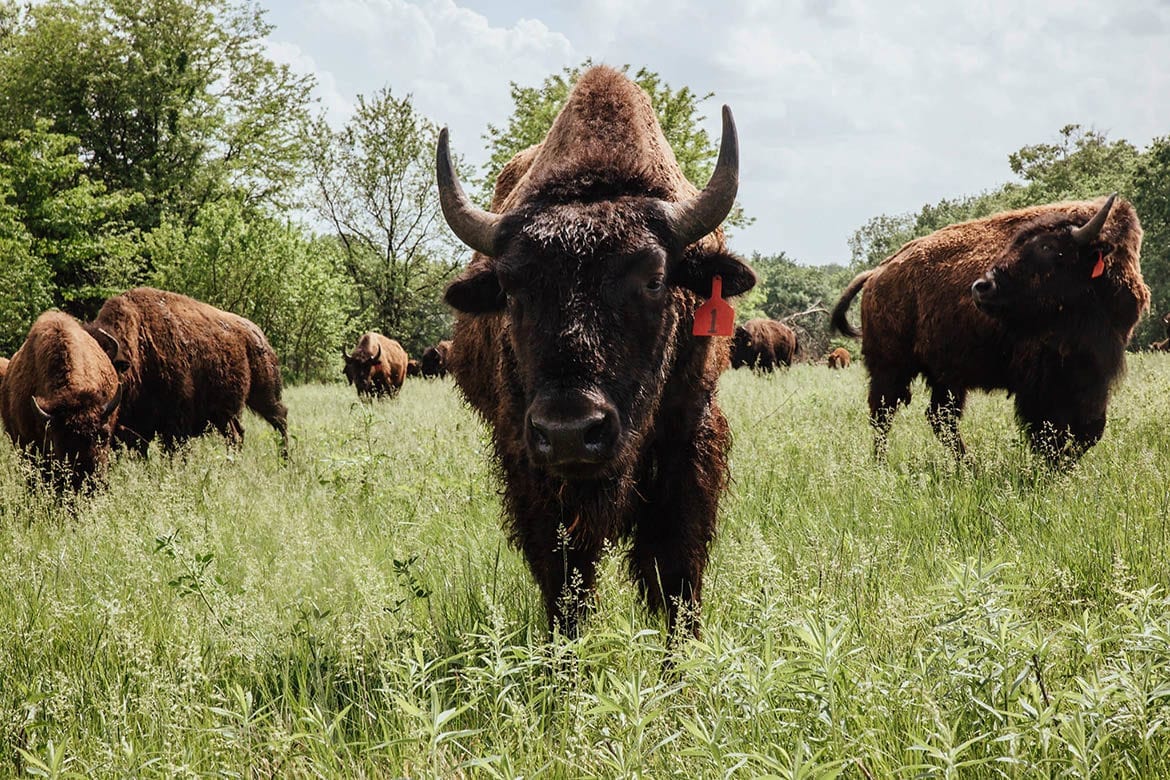 Michael and Amy Billings have 100 bison on the 330 acres they own in Kingsville, Missouri. (Chase Castor | Flatland)
Share this story

A decade ago, Leawood native Amy Dunn was living in Kansas City, Missouri, and selling books at Barnes & Noble. And even though she was apprenticing as a horse trainer, she was no more country than a suburban horse.

Her boyfriend, Michael Billings, wasn’t much different. He was a city-dwelling software engineer who also boarded horses.

But both of them yearned to have open space for their dogs and horses. So when they married in 2008, they purchased 80 acres in Kingsville, Missouri, a small township about 30 miles southeast of Lee’s Summit.

Not hunters like the previous owner, the Billingses delighted in the slow return of creatures: ducks landing on their pond, deer grazing the perimeter of their yard, and occasional coyote or bobcats rounding out the picture.

Then, in 2011, as the couple was brainstorming how they could preserve the surrounding ecosystem, Michael half-jokingly threw out the idea of raising bison.

Interested in learning more about the bison industry? You are in luck, because Kansas City is hosting this year’s National Bison Association Conference June 27-29. It is open to the public. The registration deadline is June 8.

Missouri and Kansas each have their own associations; Missouri’s has 90 members, Kansas’ has 110.

Michael Billings is president of the Missouri Bison Association.

It sounded crazy until the software engineer whipped up a spreadsheet. They ultimately bought a 13-bison “starter kit,” as Amy called it, for what is now a full-fledged business. And they serve as an example of how conservationists are taking an unexpected approach to bringing back this symbol of the American West.

Bison once roamed North America in the millions — the U.S. Fish and Wildlife Service estimates that prior to the arrival of European settlers, the continent may have been home to as many as 60 million.

It turns out that killing all the bison was not a good idea; they are what’s called a “keystone” species, which play an integral role in maintaining nature’s delicate balance.

Bison are essential in many ways, said Dave Carter, executive director of the National Bison Association, which is headquartered near Denver.

For one, he said, their foraging helps preserve grasslands by eliminating excess growth, meaning that the remaining grass has stronger roots. Left unchecked, the excess forage would choke out all the grass, contributing to global climate change by leaving a desert that no longer removed carbon dioxide from the atmosphere.

Additionally, the 2,000-pound bison stir the soil, tamp down grass seed, and create “prairie potholes” that capture rain and serve as watering holes for other animals.

“We felt that if we were really serious about helping to restore the ecosystem,” Amy said, “the choice we needed to make was to bring back that animal.” 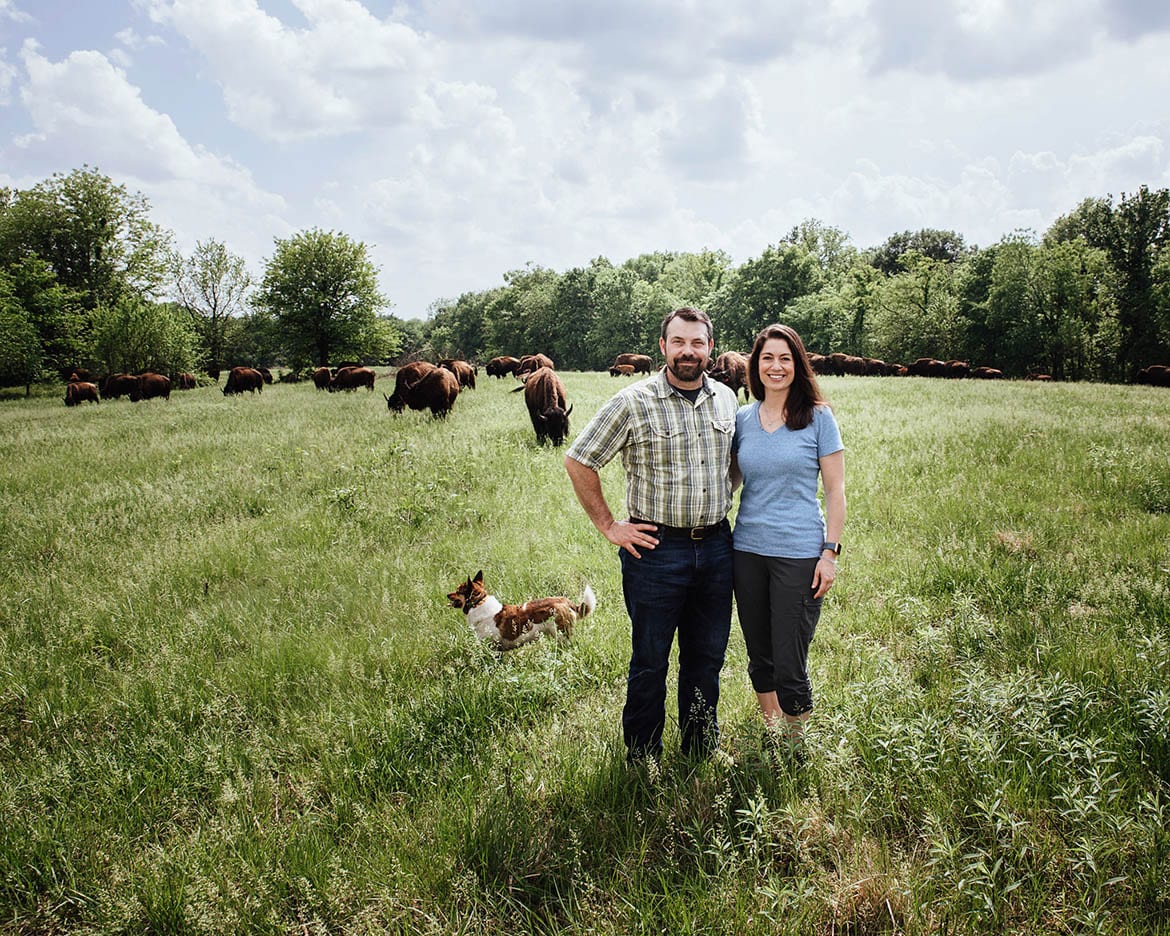 Today, North America is home to nearly half a million bison, 90 percent of which are managed by the approximately 2,500 private bison ranches counted in a U.S. Department of Agriculture census.

But the National Bison Association, the Intertribal Buffalo Council, private ranchers and conservationists say half a million isn’t enough.

That has given rise to the Bison 1 Million plan. And, as the Billingses’ approach illustrates, one seemingly unlikely way organizers hope to reach that goal is through consumers’ palates.

As it turns out, conservation and slaughter are not incompatible.

“When you have consumers that are interested in bison meat, and they’re buying it, and you can’t meet the demand, then you create the opportunity for more producers to want to get into it and raise more bison,” Amy said. “As long as there’s a demand, we can have more animals.”

Meat production also helps cull the herd. Each animal requires about 3 acres, and the Billingses are pushing the limit with 100 animals on the 330 acres they now own.

The Return of the American BisonNorth America's largest mammal, the American bison, is an enduring symbol of the Great Plains. Bison once ranged from Canada to New Mexico and from Nevada to the Appalachian Mountains. By 1889, their populations were reduced from 30 to 60…

The couple has also managed the herd by selling bison to other ranchers, as well as to Shoal Creek Living History Museum in Kansas City, North, which had a female that needed company.

But the money is in the meat, which the Billingses are marketing through their Buffalo Ridge brand. The couple made a significant investment upfront to start the business, and the herd and the business have matured to the point where they expect this be their most profitable year.

The couple’s business model is to provide a distinctly natural product.

For instance, they use specialized equipment to infuse the water supply with apple cider vinegar rather than chemicals to ward of intestinal parasites. They also raise the animals to finish weight, rather than sending them to an outside producer where they would be fattened up on corn and sold to a grocery or membership-based warehouse store.

Michael likes that he can explain the life of each animal from start to finish; caring for them has become a one-on-one endeavor.

Michael even created an app to manage and document every step of the process.

This year Buffalo Ridge is expected to produce around 9,000 pounds of meat, double last year’s supply.

Michael has a degree in computer science and developed an app to keep track of the herd, employees, and maintenance and repairs. (Chase Castor | Flatland)

A special watering system has been set up to make sure the herd has good clean drinking water. (Chase Castor | Flatland)

Mike and Amy en route to check on the herd. (Chase Castor | Flatland)

They sell the product at farmers markets and some restaurants and groceries, with the highest number of sales at the Overland Park farmers market and Terra Health & Wellness, an organic grocery store in Independence, Missouri.

Amy said she’s never been criticized for selling their animals for meat, but she’s frequently questioned about the high cost of the product. One pound of ground bison sells for $12.

Bison meat is costlier than beef for a variety of reasons, she said.

For starters, the closest federally inspected meat processing facility is nearly a four-hour drive from Kingsville. Furthermore, bison are (ironically) classified as an “exotic” species, so the government requires the producers themselves to pay for USDA inspections certifying that the plant is clean and ready to revert back to pork and beef processing.

And while cattle ranchers receive government subsidies, bison ranchers do not.

The Billingses have come a long way since Michael threw out the idea of raising bison, and they still laugh at the origins of their business.

“It seemed like such a crazy, momentous idea,” he said. “That’s so not normal. People don’t go out and raise bison. Yet, we’re tenacious people, and we actually could and did.”