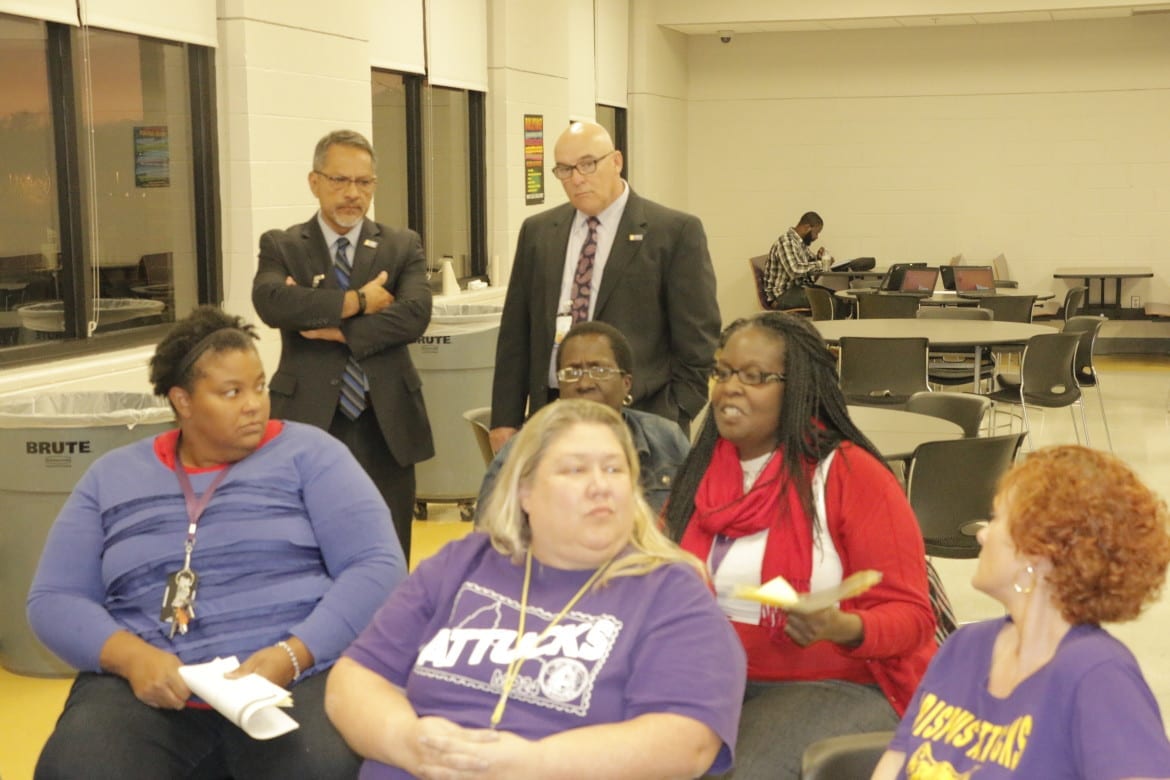 About 80 people attended a Wednesday evening open house hosted by Kansas City Public Schools (KCPS), and a sizeable contingent came with one question: Why Attucks?

Staff and parents wanted to know why the district was proposing to close Crispus Attucks Elementary School, located at 2400 Prospect Ave.

“What is the district trying to do?” parent Chris Echols asked the facilitator of a small-group discussion. “This is just going to tear up the community.”

Echols asked the question after coming away unsatisfied from a presentation led by Shannon Jaax, director of repurposing for KCPS. She is in charge of finding alternative uses for buildings the district has closed.

Wednesday’s meeting, held at Northeast Middle School, 4904 Independence Ave., was the first of four open houses the district has scheduled to gather public input on a long-range master plan staff presented to the board of education on Nov. 4.

The master plan is preliminary and could change based upon feedback the district receives at the open houses, said interim Superintendent Al Tunis. Staff expects to submit a final plan to the board of education in February.

“Why are they attacking Attucks again?” — Liane Johnson, Attucks parent

Among the reasons Jaax offered for closing Attucks was that the school was along a busy street.

She also said that Attucks was a better option than two other nearby elementary schools, Wendell Phillips and Phyllis Wheatley, because the former has historical significance and the latter has a large special education program.

Jaax also said the district needed to close some elementary schools since it has 11 elementary buildings below the optimum level of at least 350 students. Attucks had 243 students last year, according to the Missouri Department of Elementary and Secondary Education.

The Attucks contingent argued, however, that their enrollment was low because of small attendance boundaries set by the district. They also argued that the school’s students were making academic gains, thanks to a committed and caring staff.

“We have the heart and the dedication,” said second-grade teacher Erin Klein. “I would not want to be anywhere else.”

The Attucks supporters also contended that the district wants to close the school so that it can turn around and reopen it as a charter school, which KCPS is working on with the Urban Neighborhood Initiative, a community revitalization organization.

That’s untrue, Tunis said. “None of that has been determined at all,” he said.

The master plan is part of an ongoing process to downsize a district that has seen its enrollment drop by half in a little more than a decade. The district has about 15,000 students now.

In addition to Attucks, the master plan calls for closing Satchel Paige elementary and the Southwest Early College Campus.

The plan envisions redrawing attendance boundaries to achieve a number of goals, including keeping students in schools close to home and reducing the need for kids to cross “natural boundaries,” such as rivers or highways.

The plan does not specifically address where the Attucks kids would be reassigned.

The master plan also envisions saving another $2 million a year, in part by moving out of the 11-story administration building that is now much larger than the district needs.

Jaax said the recommendations included in the plan are aimed at reallocating resources in keeping with community priorities. The district and a consultant identified the priorities through an 18-month public engagement process.

Based on that feedback, the master plan includes a number of proposals to improve academic achievement and the academic experience, including developing a year-round school calendar for the lowest-performing elementary schools.

The master plan also calls for responding to transportation concerns by setting attendance boundaries so that no student would have to walk more than half a mile to a bus stop. Some kids now walk up to a mile and half.

But for Attucks supporters, who staved off closure during a previous downsizing, the plan seems like piling on.

“Why are they attacking Attucks again?” asked parent Liane Johnson.

The school has been a blessing for her two sons, who she said were bullied at a charter school they attended.

That’s not the case at Attucks, Johnson said. “It feels like a comfort zone for them.”