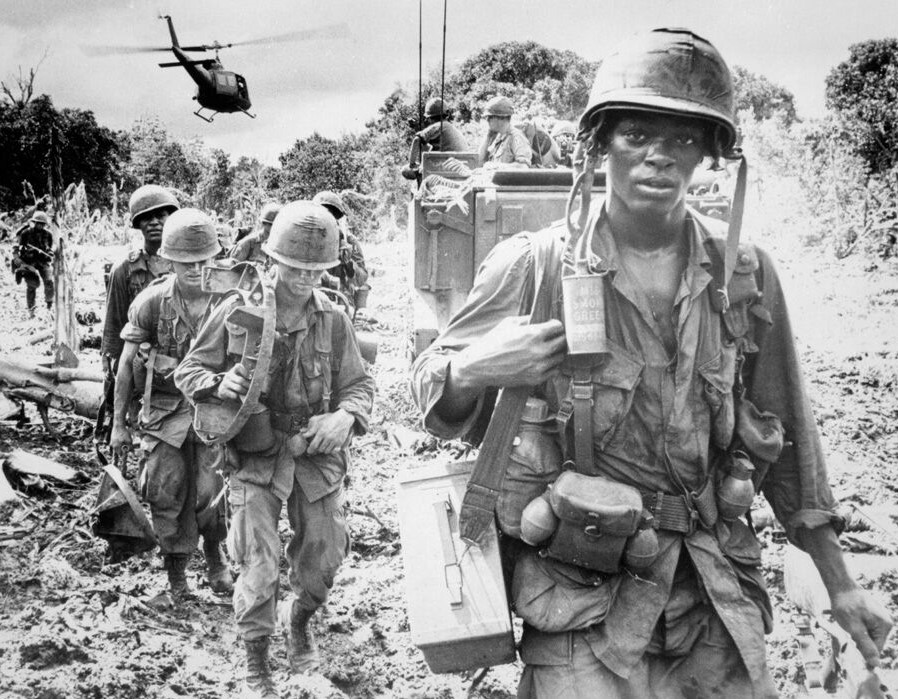 Soldiers heading out on a search and destroy mission during the Vietnam War. (Courtesy | National World War I Museum and Memorial)
Share this story

Beginning this month, Kansas City can consider one war in the context of another.

A new exhibit, “The Vietnam War: 1945-1975,” opens at the National World War I Museum and Memorial on Friday and runs through next May.

The installation explores the sometimes overlooked connections between the more recent conflict and what initially was known as the Great War.

Staff members of the New York Historical Society, where the exhibit first opened in 2017, assembled more than 300 artifacts, photographs, documents, artworks and videos. The materials illustrate the Vietnam War’s causes and continuing impact more than 40 years after its conclusion.

“When we think about public programming we want to ensure it is intellectually rigorous, that we are not drawing a spurious or frayed line between World War I and whatever the topic is,” said Matthew Naylor, museum president and CEO.

The connections between World War I and the Vietnam War more than meet that threshold, Naylor said.

What is now Vietnam was a French colony during World War I. About 100,000 Vietnamese served in France as either soldiers or workers.

“In Vietnam at that time there was a very poor harvest and significant shortages,” Naylor said. In that context, the opportunity to serve in France became more viable to many Vietnamese.

“Here was an opportunity to go serve in France, for which they would be paid,” Naylor said.

That experience had many ramifications for the Vietnamese, some of them perhaps unanticipated.

“It was revelatory for a lot of people from the other side of the world,” Naylor said. “There were those who worked in factories and learned of workers’ rights. And there were those who learned about trench warfare tactics. It fundamentally changed the nature of the French-Indochinese relationship.”

While the Vietnam War era often is framed with a 1945-through-1975 timeline, exhibit visitors will encounter a narrative of the 1919 Paris Peace Conference following World War I.

There, a young socialist organizer named Nguyen Sinh Cung requested sit-downs with world leaders in an attempt to secure independence from France for what would become Vietnam.

Rebuffed, the same man later became known as Ho Chi Minh, a founder of the Indochinese Communist Party and, from 1945 through 1969, president of North Vietnam.

“Nothing in history happens in a vacuum,” said Doran Cart, the museum’s senior curator. “The peace accords ending the Vietnam War were signed in Paris… History didn’t stop, it just continued up until then.”

While some of the exhibit’s accounts and images may be familiar, others may surprise.

The exhibit includes a collection of Zippo cigarette lighters that, with their soft chrome surfaces, often became decorated with drawings or sentiments rendered by South Vietnamese engravers, and then carried into combat by Americans.

Another unexpected story: The U.S. Army library system that operated seven days a week during the war.

At larger bases, soldiers patronized library branches, checking their weapons at the front desk. In the field, they had books brought to them, sometimes by bookmobiles or even by helicopter. The system’s director insisted that materials not be censored, meaning that soldiers could access books devoted to the war itself, as well as topics such as civil rights and the Black Power movement.

One video is devoted to the experiences of Frankie Gaye who – upon his return from service in Vietnam – shared both his war-time memories and the frustrations of his return to civilian America with his older brother, singer Marvin Gaye.

The elder Gaye went on to articulate those sentiments in his 1971 album “What’s Going On.”

An introductory gallery curated by National World War I Museum and Memorial staff members, meanwhile, will detail still other connections between the two wars.

Included will be the World War I experiences of future president Harry Truman, who led an artillery battery across France in 1918 and who – as president in 1950 – would authorize financial and military assistance to France during the Indochina War of that time.

Also noted will be future president Dwight Eisenhower, who trained tank troops in Pennsylvania in 1918 and – as president in 1954 – articulated the “falling domino” theory, a cautionary metaphor for the possibility of other nations on the Indochina peninsula coming under communist control.

In some ways, the on-the-ground realities of the wars in Vietnam and France, even while occurring decades apart, appear indistinguishable.

The Vietnam exhibit includes a U.S. Army canteen carried during the war. It is virtually identical to the canteens on display in the National World War I Museum and Memorial, differing mainly in the materials used in their assembly. The Vietnam canteen is made of plastic, while the World War I canteens are constructed of aluminum.

“The war-time needs of soldiers change little over time, especially in the need for drinking water,” Cart said.

The Vietnam exhibit speaks to the museum’s mission, Naylor said, to interpret and understand World War I.

“We are interested in thinking about the ways in which the world has been transformed by decisions and actions taken during World War I,” he said.

The exhibit will be in the museum’s Wylie Gallery, which opened last year. At the exhibit’s entrance, visitors will have access to a family guide. Recommended for children ages 12 and older, the booklet will “stimulate conversation and learning,” Naylor said. It also will alert families to the exhibit’s occasional use of graphic imagery.

The museum and Liberty Memorial will be hosting several events in connection with the exhibit opening.

On Monday, Nov. 11, Veterans Day, a 10 a.m. ceremony in the memorial courtyard outside the museum will feature a keynote address by Pellom McDaniels III, a former member of the Kansas City Chiefs and current curator of African-American Collections at Emory University’s Rose Library in Atlanta.

That is free. Also, free general admission to the museum will be available to veterans and active duty military personnel Nov. 8-11.

The memorial grounds long have sponsored ceremonies honoring veterans. Over the Memorial Day weekend of 2015, thousands visited the traveling replica of the Vietnam Veterans Memorial there.

“It was very moving,” Naylor said. “Clearly, there were so many people who had been touched by the Vietnam War.”

Naylor also recalled the veterans and their friends and family members who in 2017 filled the Arvest Bank Theatre at the Midland to watch filmmaker Ken Burns introduce his 18-hour Vietnam War documentary.

The traveling Vietnam Veterans Memorial replica is scheduled to return to the Liberty Memorial grounds next May, when the exhibit ends. Many of the museum’s volunteers, meanwhile, are veterans themselves, Naylor said.

“The exhibit is a beautiful intersection of opportunities,” Naylor said. “It is a powerful story to be told and for us to reflect upon… It gives us an opportunity for a larger conversation.”

Matthew Naylor, president and CEO of the National World War I Museum and Memorial, is scheduled to appear on KCPT’s “Ruckus” Thursday at 7 p.m. to discuss the Vietnam War exhibit.

Episodes of Ken Burns’ “The Vietnam War” documentary are scheduled to be shown throughout November on KCPT2.