‘No burgers, no fries, make our wages supersize!’ 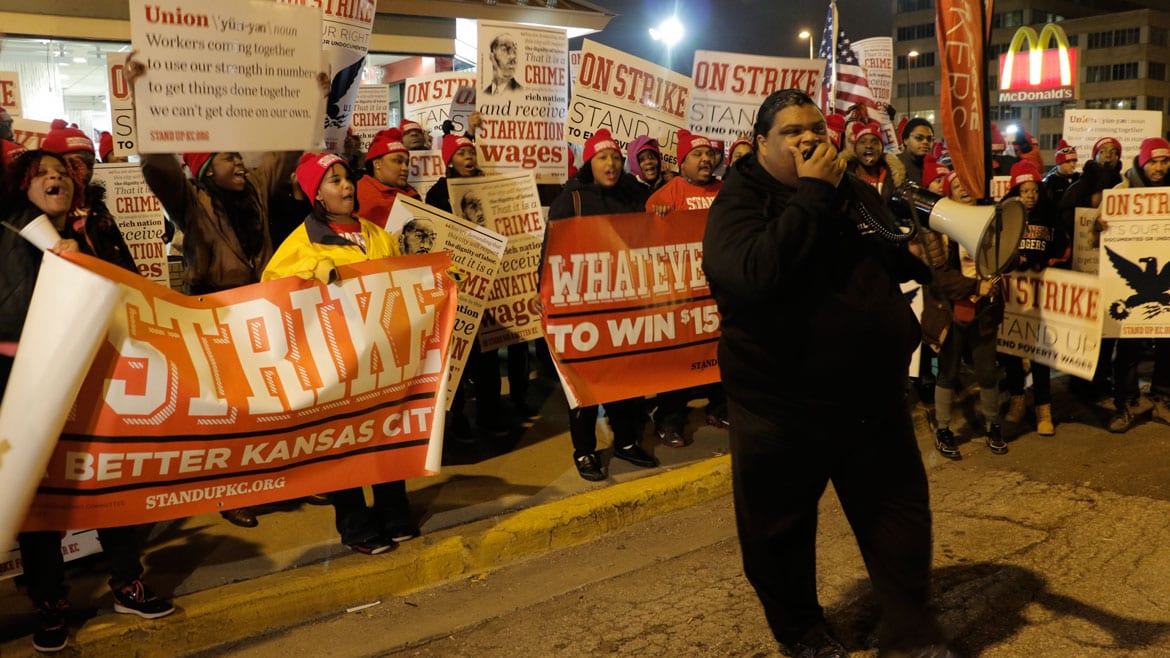 Between 81st and 85th Streets on Wornall Road in Kansas City, Missouri, there are half a dozen fast food restaurants: Taco Bell, Jimmy John’s, McDonald’s, Sonic. This afternoon, employees from these restaurants and others around the metro took to the streets to strike for “15 and a union”: $15 minimum wage and the right to unionize.

The strike, and another this morning at McDonald’s at 812 Minnesota Ave. in Kansas City, Kansas, was organized by Stand Up KC, a part of the national #StrikeFastFood movement. According to the organization’s website, 190 cities, like New Orleans and Los Angeles, saw similar strikes today.

The strikers were loud and passionate, calling “get up, get down, fast food workers run this town” while they walked the streets between fast food restaurants.

At a Taco Bell, at around 12:15 p.m., participants crowded the lobby to share their message over the bullhorn and interrupt lunch service and then spilled back onto the street, urging non-striking fast food workers from various restaurants to join the march: “Come on out, we’ve got your back!”

Sonic employees at 8227 Wornall Rd. did not seem interested in participating. They beckoned police over, saying that protesters were hitting the windows of the Sonic. Police told the crowd to disperse, which led to the first calls of “hands up, don’t shoot” of the day. This phrase and the accompanying “hands up” pose have become a symbol to protest police brutality in the aftermath of Michael Brown’s death in Ferguson, Missouri. 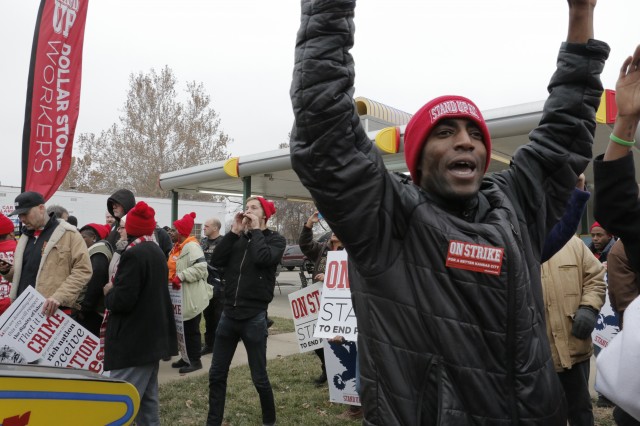 Terrence Wise, a leader in the Stand Up KC movement, gives the “hands up, don’t shoot” display while striking for higher wages Thursday afternoon. (photo by Caitlin Cress/Hale Center for Journalism)

Police presence thickened considerably after the altercation at Sonic, and many strikers were concerned to see a school bus with “police arrest bus” written on the side parked next to a KCMO police car. But the bus was not put to use, and interaction between police and protesters was tense but minimal.

Donna Simon, pastor at St. Mark Hope and Peace Lutheran Church and faith leader of Stand Up KC, said the movement to raise the federal minimum wage, which is currently $7.25, is one of the most important modern civil rights movements.

“We have opened a gap between people who are making a decent living and people at the bottom end of the wage scale that is so wide right now that it is completely unjust,” she said.

Krystal McLemore, who pushed a stroller while protesting at 6:30 this morning, makes $7.85 at Taco Bell. She supports five children with her significant other, who also works in fast food. She said a $15 minimum wage could help her get the kids some of what they want instead of just what they need.

Dana Wittman lives in what she called a “slumlord” apartment with her three adult children. They all work fast food jobs. Wittman’s job at Subway pays her $8.75 and is only a mile from her house. Her severe asthma, however, means she can’t walk that distance. She’s forced to take the bus. A raise to $15 could mean a nicer, safer apartment and a car.

“Right now, it comes down to I have to decide if I want to pay my rent or pay for food because my wages aren’t enough to pay for both,” she said.

A car for Wittman could also mean more hours on the clock: She’d be able to take shifts at other Subway locations. With what she said is an unreliable bus system as her means of transportation now, this isn’t an option.

Terrence Wise, a leader in the Stand Up KC movement, has worked at Burger King for 10 years and makes $9.50.

“You would think working a full-time job for a company that I would be all right, but just recently I had my gas turned off,” he said. “It’s always a battle, choosing between rent, food, you have to have car insurance, get the car paid. It’s always a constant struggle.” 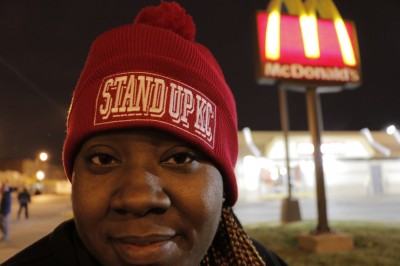 Krystal McLemore and her significant other support their five children by working fast food jobs. (photo by Caitlin Cress/Hale Center for Journalism)

Today marked the sixth Stand Up KC strike in 18 months. On the organization’s Facebook page, the group cites a list of victories: $0.50 and $1 raises, workers allowed to clock in for training, shift meals. Rev. Simon said this progress is encouraging, but it’s not enough.

“Fifteen dollars an hour sounds outrageous because we’ve let the minimum wage get so low, so that its buying power is lower than it’s ever been,” Simon said.

Other cities have recognized this by instituting higher minimum wages. Chicago’s city council, for example, voted to raise the minimum wage to $13 by 2019 on Tuesday, according to the Associated Press.

Simon said the biggest success of the strikes, so far, has been the dissemination of information.

“Probably the most important success has been just the consciousness raising,” she said. “The fact that people are starting to recognize that we have people who work full-time and make $15,000 a year, which is a criminal wage.”

She thinks more and more people are also aware that low-wage workers are not just teenagers. She said the average fast food worker is an adult with bills, responsibilities and family.

Andrew McConnell is one of these workers. He is employed by McDonald’s, where he makes $7.45. McConnell has a master’s degree in secondary education, but needed a job with flexible hours while managing the health care of a special needs child.

“This was the first thing that opened up,” he said. “I just took it, and I’m not ashamed of that.” 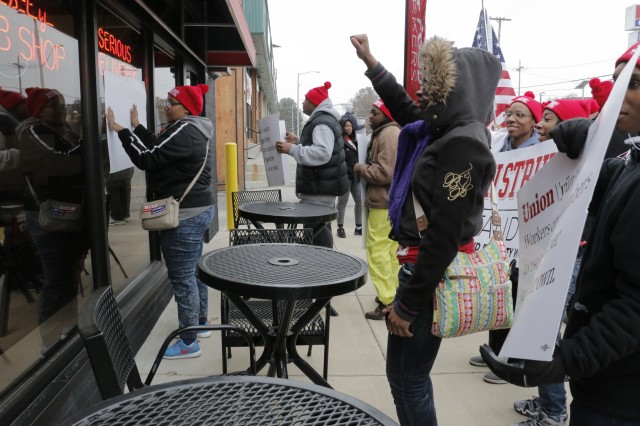 Fast food workers gather outside of a Jimmy John’s on Wornall Road, encouraging fellow workers to come out and join their strike. (photo by Caitlin Cress/Hale Center for Journalism)

McConnell is an inspiring speaker, whose pronouncements take on the rhythmic cadence of a preacher. During the morning strike in front of the McDonald’s where he works, McConnell used a bullhorn to deliver his call to action:

“These companies need to get used to seeing us in this capacity because the movement is growing,” he said. “It’s getting stronger.

“I make thousands of dollars a day for this store right here … and we deserve better,” he said. “What do we want? 15 and a union. When do we want it? Now. If we don’t get it? Shut ‘em down.”