Kansas is opening up the vaccination floodgates this week.

Starting today, more than 600,000 Kansas residents are eligible to receive the COVID vaccine. For the first time, Kansans under the age of 65 with critical medical conditions like cancer, heart problems, obesity, diabetes and asthma will be able to get the shot. And Kansas is also expanding the vaccine to critical infrastructure workers.

So who is that?

According to the state, it’s a wide group that includes anyone working in the food industry or the transportation sector. It also includes utility workers and those who work in banking and information technology. Government and communication workers are also eligible.

But is this big expansion just going to make it tougher for seniors still waiting to get their shots?

It looks that way.

The head of public health in Johnson County, Dr. Samni Areola, says it’s possible the newly eligible could receive shots before those who have been waiting since January.

According to state health figures, one in three seniors in Johnson County still haven’t been vaccinated and it could be higher in other areas.

It’s not hard to see why.  Even with larger numbers of doses becoming available, health advocates say seniors are still at a disadvantage because of the complex system of online sign-ups and the travel needed for shots. Now a new study has discovered another hurdle — the cost.

A Medicare Advantage survey finds that more than 300,000 seniors are planning to avoid getting inoculated because of concerns they’ll have to pay for the vaccines.

Even though the shots are free, the study notes, “It’s difficult to fault older adults for having concerns about the cost” because there have been numerous reports of clinics charging people for vaccine appointments and there have been countless examples of seniors being scammed out of their money.

But public and political pressure is pushing states to relax their eligibility rules. With President Joe Biden requiring states to make the vaccine available to everyone by May 1, there’s a push to act fast.

In Missouri, Gov. Mike Parson says the vaccine will be available to any Missourian who wants it by April 9. That’s a little more than two weeks away.

Of course, just because the vaccine is available doesn’t mean everyone will take advantage of it. Parson says the state estimates only 60% of its residents will want one. That’s a low acceptance rate. If that holds, it’s going to pose challenges to companies, public institutions and entertainment venues who are already working on plans to demand vaccinations of employees, visitors and customers.

Now that Kansas is opening up vaccinations to anyone with a host of different medical conditions, one big question looms.

Do you have to prove it?

We looked for guidance on that question from Kansas Health Secretary Dr. Lee Norman.

He says the state is relying on the “spirit of fairness and honesty.”

While some states like New Mexico require a note from a doctor or a prescription, that’s not going to be the case in Kansas.  Missouri doesn’t require it either. But the state does ask you to sign a form that “self-attests” your status in a “prioritized population.” Of course, it doesn’t stop people from lying.

This Thursday marks two years since the groundbreaking on the new $1.5 billion single-terminal at Kansas City International Airport.

It is the largest construction project now underway in our region. Even though there’s a lot of money at stake, I remember getting calls from viewers saying they would switch channels if we talked about KCI “one more time.” People were experiencing “KCI fatigue.” I was asked, “Was there no other stories happening in Kansas City?”

How times have changed.

The KCI project has slipped from the radar screen. That’s partly because few of us have been out to the airport in the last year.

Has the pandemic forced the city and its development team to rethink the scope and size of the project?  With big Kansas City companies like Cerner Corp. saying they will never return to the kind of business travel they did before COVID hit, has that led to a decision to scale down the number of gates?

Apparently not. The city is holding firm on its design plan and has already picked a date for the grand opening.

There’s little room for error. A few weeks later, Kansas City will be in the spotlight as it hosts the 2023 NFL Draft. That nationally televised event traditionally takes place in late April.

So what happens to them now?

If you’ve been to Westport in the last few days, you can see for yourself. A large encampment has now sprung up across from the entertainment district.

Another encampment has now been erected outside of City Hall downtown.

While there have been scores of complaints, the Kansas City Mayor Quinton Lucas and the City Council say they have no plans to tear down the makeshift villages of tents and tarp coverings.

In fact, the city has provided a portable toilet and electrical access to the encampment outside its windows on the south lawn of City Hall.

But there’s no agreement yet on a permanent fix. Some housing advocates are pushing the city to spend part of its $195 million federal stimulus windfall on a long-term solution for the unhoused. 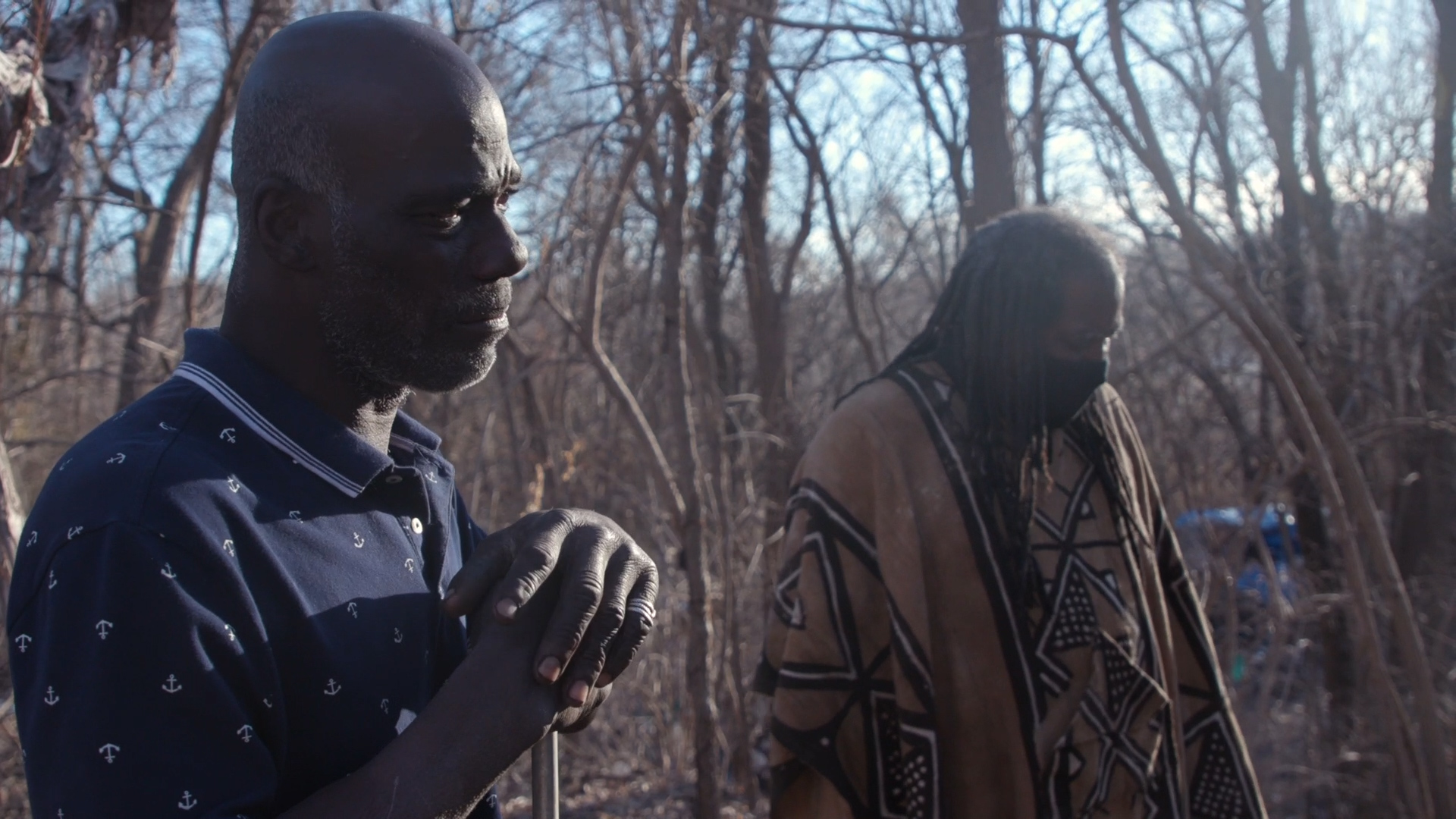 Unhoused and Unheard: Temporary Fixes Fall Short of Demands for Unhoused Community The pandemic has exacerbated the homeless crisis in Kansas City, and advocates for the unhoused are pushing for more permanent solutions.

As a former statehouse reporter, I understand any lawmaker can introduce a bill, it doesn’t mean it’s going to go anywhere.

But in Kansas a measure blocking transgender athletes from girls’ sports is gaining momentum.

Last week, the Kansas Senate approved the bill. This week, it moves to the Kansas House.

If it passes, the ACLU says it will sue.

Concern over transgender athletes competing in girls’ sports is playing out in statehouses across the country.

This month, Missouri lawmakers held hearings on two bills. One is a constitutional amendment that will ask voters to decide the issue next year. Lawmakers also heard testimony on another measure that would prohibit anyone under the age of 18 from getting medical treatment for gender reassignment. That bill is awaiting committee votes in the House and Senate.

Former Missouri Sen. Claire McCaskill recently announced she has absolutely no interest whatsoever in running for political office again. Her declaration came after Roy Bunt’s surprise decision not to seek reelection to the U.S. Senate.

But if McCaskill doesn’t see herself back on Capitol Hill as an elected official, how about as an ambassador?

The New York Times reports that McCaskill is on President Biden’s shortlist for a plum overseas diplomatic post.

The Hong Kong-based South China Post has even named her as a likely pick to become ambassador to China. An announcement on that could come as early as this week. McCaskill has declined to comment.

Many of us were likely relieved when the federal government announced it was extending the income tax filing deadline from April 15 to May 17.

That gives my wife and I a bit more time to do our paperwork. And now there’s more good news.

The state of Kansas and the state of Missouri have both announced they will follow Washington’s lead. That means you now have an extra month to figure out your state taxes too.

After a pandemic year, you may have some other calculations to make on your return.

One big item is whether you can get a rebate on the earnings tax you pay if you work but don’t live in Kansas City, Missouri?

Before the pandemic, if you lived in Lenexa or Lee’s Summit and commuted in to work downtown, you would pay a 1% city tax on your earnings.  But if you’ve been largely working from home this year, should you get a refund?

Accountants in our area are nudging their clients to claim a rebate. As you can imagine, Kansas City isn’t happy. The tax brings in $292 million a year. About $115 million of that comes from non-residents.

Am I seeing things or was that really a 6-foot-tall bunny?

After skipping a year due to COVID concerns, the gigantic bunnies are back on the Country Club Plaza.

Nine bunnies have hopped back into town along with eight other animals.

It’s a longstanding tradition. The bunnies first appeared back in 1931 as a way of bringing more foot traffic to the outdoor shopping center in the lead up to Easter.

Today the Plaza’s management team says it about sharing a little optimism and welcoming springtime.

The statues will remain up through April 11.

So you’re not caught unawares with your planning this week…

The Jewish holiday of Passover begins at sundown on Saturday. And this Sunday, marks the beginning of Holy Week for Christians. It is Palm Sunday.

For many Kansas Citians, the sound of squeaky sneakers on hardwood floors will be the biggest story for a second week in a row. The NCAA Men’s Basketball Championship continues in Indianapolis. Only one local team remains and that’s the University of Kansas.

The KU Jayhawks take on the USC Trojans tonight at 8:40 p.m.

Meanwhile, the Women’s Championship kicks into high gear this week in San Antonio. Only one local team made the cut and that’s Missouri State University. They take on UC Davis tonight at 7:30 p.m.

And let’s not forget that the oldest national college basketball championship is still going on right here in Kansas City at Municipal Auditorium. Every local team has been knocked out. The final is Tuesday night.