Are we about to break a big record in Kansas City?

Sunday marked the ninth straight day of rain. If there’s a stray storm by midnight tonight, we will tie the record for the soggiest stretch in Kansas City history. The last time we’ve been soaked for so long was back in 1914.

If it rains on Tuesday, it will be officially the wettest stretch Kansas City has ever seen.

The Kansas City Police Department will be in the spotlight this week, just days after the City Council voted to dramatically change the way the department is funded.

Opponents of the move claim it defunds the police. Mayor Quinton Lucas says it better holds the department accountable.

Many Missouri lawmakers are unhappy and they’re calling for a special session to stop the move. This week, all eyes will be on Missouri Gov. Mike Parson to see if he plans to bring the legislature back to halt the plan.

Reporting on this issue has been high on emotional language but fuzzy on what it actually means.

What we do know is that state law requires Missouri cities to allocate a minimum of 20% of their budgets to police services.

The plan approved late last week meets that figure. But it takes all the excess money, about $44 million, and places it in a new Community Services and Prevention Fund that the city and police board will have to agree on how to spend.

KCPD Chief Rick Smith says he was blindsided by the move and one council member called the sudden vote “sinister.”

There are so many unanswered questions. With the city now getting close to $200 million in federal pandemic assistance money, why was it necessary to mess with the police department’s funding in the first place? How will Kansas City spend the large sums of cash it’s now putting into this community fund? And does the move do anything to reduce homicides or make Kansas Citians feel safer?

The mayor is promising more answers as the ordinances are taken up by the council’s public safety committee Wednesday morning.

This Tuesday marks one year since Floyd died after being restrained by Minneapolis police officers. His death would set off mass protests here and around the country and spark calls for changes in policing.

This Tuesday night on Kansas City PBS we take a look at what has changed, and what hasn’t, since the outrage and protests of last summer. 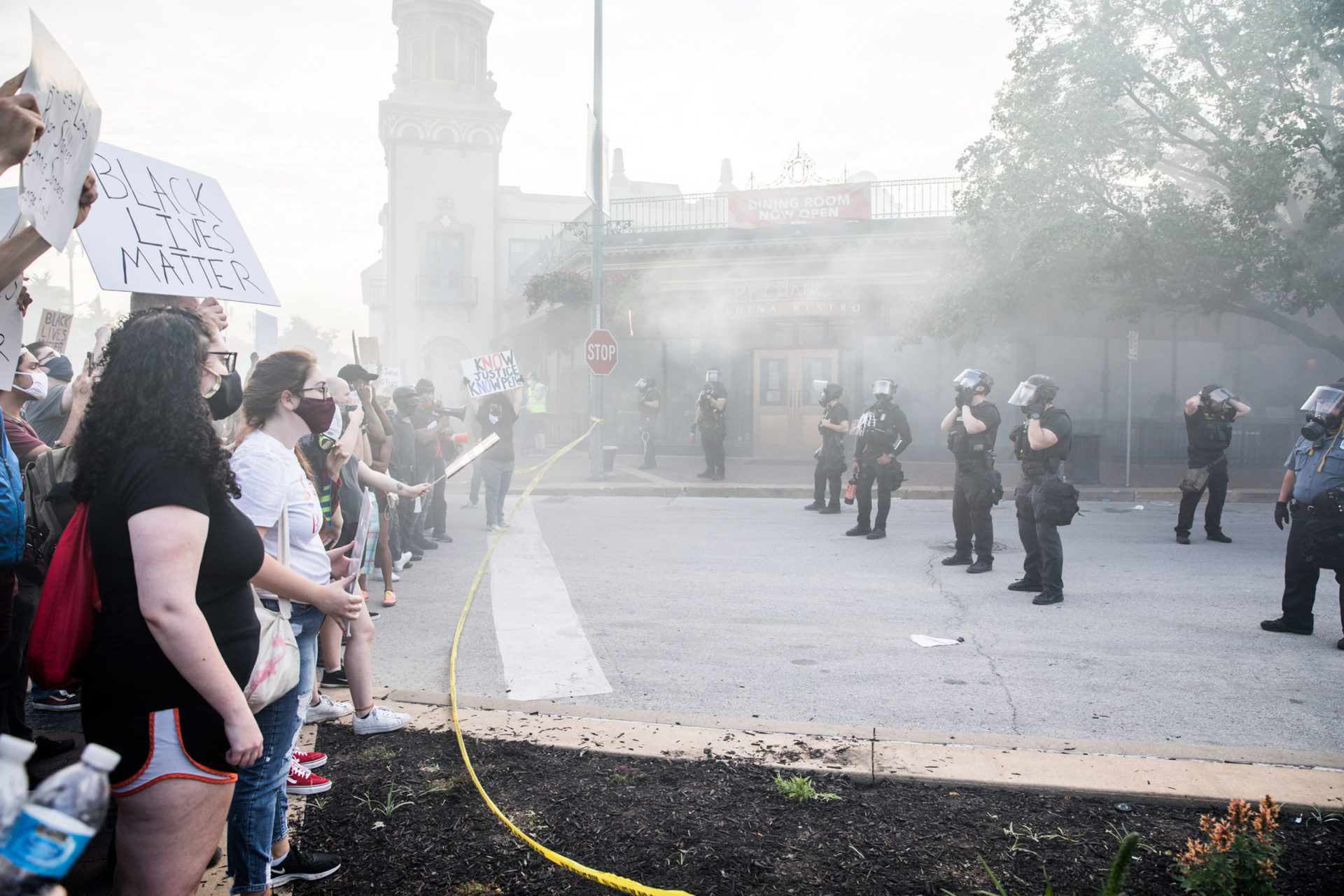 KC Protesters Ask Police: ‘Who do you protect? Who do you serve?’ Scenes from inside Kansas City’s George Floyd demonstrations this weekend. 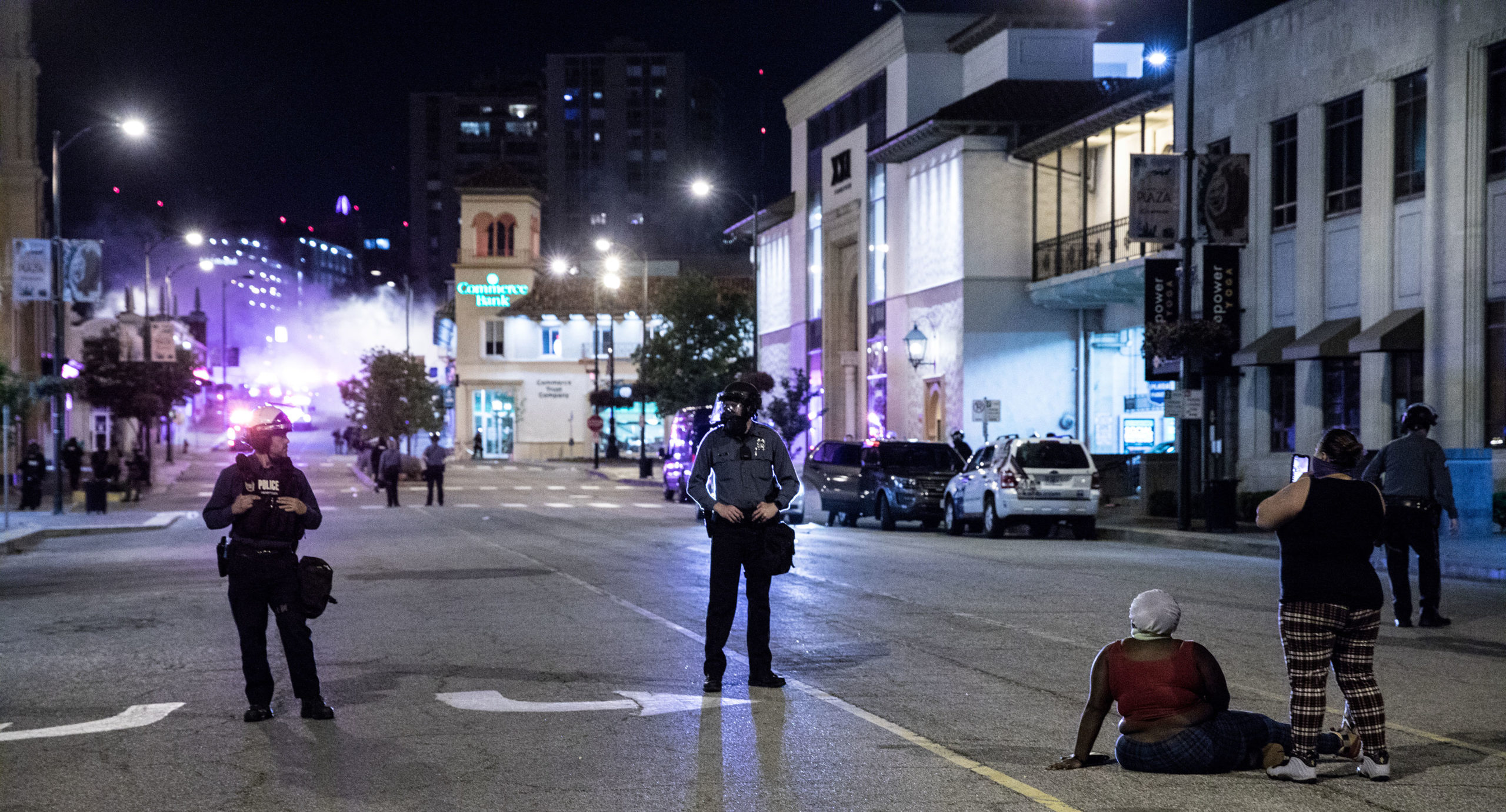 Broken Hearts and Broken Glass: Kansas City Voices Its Pain Kansas City’s protests are about more than just the death of George Floyd at the hands of Minneapolis police.

The battle to expand Medicaid in Missouri has now shifted to the courtroom.

A lawsuit was filed late last week to force Gov. Mike Parson to implement the voter approved measure that is scheduled to begin on July 1.

The suit was filed on behalf of three Missourians with chronic health conditions who say they cannot afford medical coverage.

A preliminary ruling in the case could come as early as this week.

Nearly every city and county in our metro has now dropped their mask mandates. So have most bars, restaurants and retailers. But as we start our week together, there is still one place that still requires you to put on a mask wherever you go. And that’s Wyandotte County.

With the lowest vaccination rates in the metro, Wyandotte County leaders have continued to enforce strict COVID-19 rules. But that is likely to change this week. The Board of Commissioners of the Unified Government will vote Thursday on whether to let its current face covering order expire.

With seven in 10 residents still unvaccinated, local businesses in the county are trying to encourage the shot.

For instance GG’s Barbacoa Cafe in Kansas City, Kansas, is taking 25% off any order for those who can prove they are fully vaccinated.

The Hollywood Casino at the Kansas Speedway is giving away $10 in free slot play to anyone who shows up with a completed vaccination card.

If you haven’t yet had the shot, is there any amount of money that would coax you to do so?

West Virginia is giving away $100 savings bonds. Would that entice you?

How about $1 million? Ohio has started a vaccine lottery where five lucky residents can win $1 million each. In addition, the state is choosing five vaccinated teenagers to receive full-ride scholarships to one of Ohio’s public universities.

No word yet on whether the governors of Kansas and Missouri are contemplating something similar. But apparently it’s working. Ohio state health officials say after a significant slowdown in vaccine appointments, there’s been a 6% jump in requests for the shot.

Full crowds are now coming back to our sporting stadiums, starting this week.

After months of restricting fans, Sporting KC will play before a packed house at Children’s Mercy Park on Saturday.

The Royals are also dropping attendance restrictions. Full capacity will be allowed at Kauffman Stadium starting with next Monday’s game against Pittsburgh.

We’re heading into the Memorial Day holiday this weekend. But for the second year in a row, we will not be marking the holiday with our big “Celebration at the Station” event over at Union Station.

The region’s largest free outdoor concert with the Kansas City Symphony has been canceled, amid concerns about bringing such a large crowd together.

That doesn’t mean the Kansas City Symphony has gone into hibernation.

For the first time in more than a year, the symphony says it’s ready to perform again in front of a live audience inside Kauffman Center.

That first performance is this Wednesday as part of a special concert series for symphony subscribers.  It will be a limited capacity affair and masks are required.

Starting on Wednesday, guests can take an elevator followed by 45 stairs to the open-air observation deck for a breathtaking view of the Kansas City skyline.

Dig out your binoculars, and even a telescope if you have one. This is supposed to be a big week for those who love to gaze up at the wonder of our night sky.

I don’t understand these things, but a super blood moon and a lunar eclipse are both on the way this week.

It doesn’t happen very often, and while Kansas City is not in the best spot to see the show, if you’re willing to get up at the crack of dawn on Wednesday you will still be rewarded with some spectacular sights.

Optimum viewing time in Kansas City is Wednesday at 5:59 a.m.

It’s the last day of school this week for most of our area school districts.

The Kansas City Public Schools will close up shop for the summer on Thursday.  Most Johnson County school districts start their summer vacation on Friday.