Can Missouri afford not to expand Medicaid? 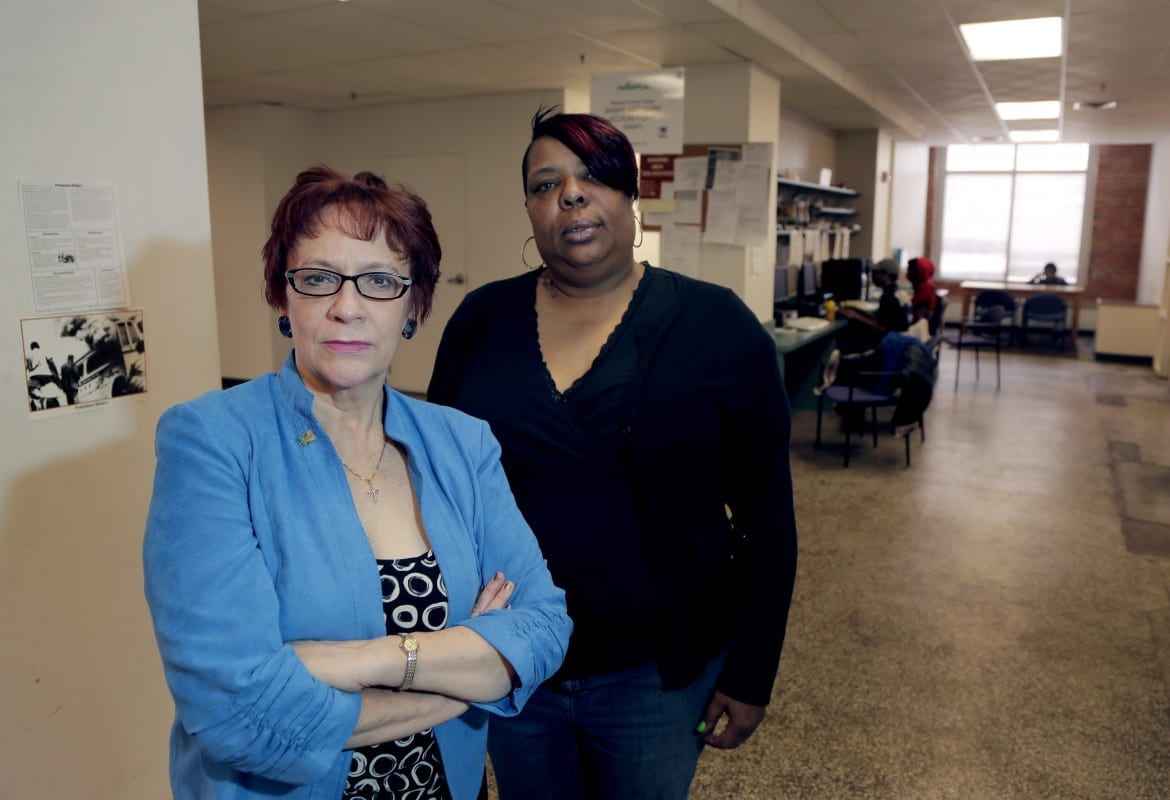 In this March 19, 2013 AP photo, Evelyn Craig, left, executive director of reStart Inc., and LaTonya Jenkins, a reStart client who lives at the facility, pose at the homeless shelter in Kansas City, Mo. The women said they were concerned that Missouri's refusal to expand Medicaid would harm residents of the shelter like Jenkins. (AP Photo: Charlie Riedel)
Share this story

Even as prospects appear bleak for Medicaid expansion in Missouri, a new report says the state would save $81 million right off the bat and $100 million annually later on if it expands the program.

The report by the Missouri Budget Project, a nonpartisan think tank in St. Louis, says the savings would come from money the state currently spends on Medicaid services provided to pregnant women, mental health patients and prisoners in need of medical care.

“This is a real asset to the state,” says Amy Blouin, executive director of the Missouri Budget Project, referring to expansion. “There were legislators who were concerned about the need to invest more state funding in health care services, but what we’re showing in the data is that not only do we invest more dollars overall in health care – not only is it a health care benefit – but because of the cost savings, we actually have a net benefit in general revenue that can be used to support other services as well.”

In Missouri, Medicaid eligibility for the non-disabled is limited to non-elderly adults with dependent children whose incomes don’t exceed 19 percent of the federal poverty level – or $3,700 for a family of three. The federal government pays 63 percent of the costs of the state-federal program; Missouri pays 37 percent.

Under the Affordable Care Act, commonly known as Obamacare, states have the option of expanding Medicaid eligibility to individuals making up to 138 percent of the federal poverty level – about $16,104 in annual income for an individual and $26,000 for a family of three. The federal government would pay for 100 percent of the costs through 2016 and at least 90 percent every year after that.

About 260,000 uninsured Missourians would be eligible for Medicaid if the program were expanded. As things stand now, those Missourians make too much for Medicaid but too little to qualify for the subsidies available through the marketplaces, or exchanges, established under the Affordable Care Act.

Missouri lawmakers have resisted expansion, claiming the federal government can’t be trusted to deliver on its promises. Senate President Pro-tem Tom Dempsey, a St. Charles Republican, told reporters last week that the General Assembly would work to reform Medicaid without expanding it.

The Missouri Budget Project report says Missouri can’t afford not to expand Medicaid and argues that the state’s 10 percent share after 2016 would actually end up as just 6.7 percent once savings generated by expansion are taken into account.

Under expansion, the report says, the federal government would pick up no less than 90 percent of the tab for expenditures the state currently shoulders in whole or in part for pregnant women making less than 138 percent of the federal poverty level, mental health patients and prisoners in the custody of the Department of Corrections.

“One of the easy examples is individuals with mental health needs,” Blouin says. “The Department of Mental Health provides services at 100 percent state funding for about 40,000 individuals who will actually be eligible for Medicaid under the expanded Medicaid eligibility.”

The report also notes that the state would benefit from expansion because, for every $1 in taxes hospitals pay to help cover Missouri’s Medicaid costs, the hospitals get back $2 from the federal government to cover the Medicaid services they provide.

Missouri Sen. Ryan Silvey, a Kansas City Republican, has proposed a Medicaid expansion bill that seeks to address the concerns of conservative members of the General Assembly, but prospects for its passage don’t appear encouraging. Last week, The Kansas City Star reported that a group of Republican senators has promised to filibuster expansion if it manages to get any traction.

In Kansas, where lawmakers have also shown little interest in expanding Medicaid, hospitals are touting expansion as an economic development initiative. Tom Bell, president of the Kansas Hospital Association, told Heartland Health Monitor that expansion would create jobs and stimulate the economy.

“There has been progress made clearly since last session in terms of people understanding the issue better, people feeling like we ought to really take a hard look at it,” Bell says. “But is there universal support among every faction in the Legislature? No, I can’t tell you that. I think it’s still a heavy lift, it’s still an uphill battle, but I think our point is, look, we’ve waited too long already.”