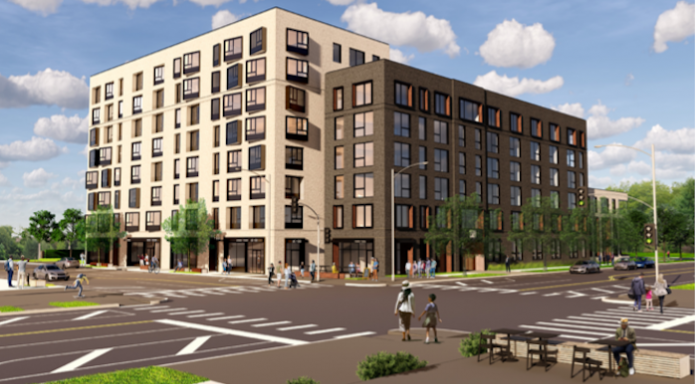 MAC Properties plans to build an eight-story building at the southwest corner of Armour and Troost. (Courtesy | Helix)
Share this story

MAC Properties’ plan to revitalize the intersection of Troost and Armour with a 340-unit apartment project has been approved by the City Plan Commission.

The commission unanimously endorsed the final design of the Armour Corners project, which calls for new apartment buildings on each corner, replacing what is now vacant lots and dilapidated buildings. The plan now goes to the City Council for final consideration.

“It’s wonderful to see this commitment to an area of the city where we haven’t had development,” said Babette Macy, commission chairwoman.

“You’ve proven yourself to be a great contributor to our city.”

The Armour Corners project, which includes 13,000 square feet of retail, is the latest venture by Chicago-based MAC. Over the past dozen years, the firm has renovated 30 buildings into 1,500 apartments along Armour roughly between Broadway and Cherry.

It recently broke ground on a 110-unit apartment building at 520 E. Armour. All told, the development, including the new building at Cherry and Armour, will be an estimated $78 million investment.

Peter Cassel, MAC director of community development, said his firm is pleased with how its major investment in midtown Kansas City has panned out.

“We’re willing to spend tens of millions of dollars to build apartments here because we we believe there’s a strong demand for more apartments on Troost.”

MAC has been pursuing the Armour Corners development since 2015 and began serious planning in 2016. The project is located within the territory of three neighborhood associations and two City Council districts.

Cassel said the developer has held 24 community meetings over the past three years in an effort to satisfy neighborhood concerns.

One of the chief issues was parking, with some neighborhood groups concerned not enough was being provided on site and residents would park along nearby streets.

To address that objection, MAC acquired a deteriorated six-unit apartment building at 3429 Harrison to provide space for more surface parking, increasing the number of spaces for the Armour and Troost buildings from 170 to 187 spaces.

The Armour Corners plan also had its retail component decreased from the original 30,000 square feet to reduce parking demand.

The approval process at City Hall for the development was divided into two parts. Last year, the City Council approved a general development plan for the project along with tax incentives to help finance the plan.

MAC was then asked to return to the city for separate approval of its design. The plan commission action endorsed that design, and Cassel said MAC hopes to have final council approval by the end of the month.

MAC would like to break ground this June on the first two buildings on the east side corners of Troost. The east side of Troost is within a federal opportunity zone, and Cassel said federal tax credits available to help fund the plan will expire June 30.

As part of the development plan, teachers and other public employees also will receive a 10 percent discount on their rent.

In response to criticism the project did not have a portion of its units reserved as affordable housing, Cassel said the development plan was approved by the council as market-rate housing.

“We’ve said if there are additional resources to make more units affordable, we’re willing to work with that,” he said.

“We’re committed to working with the community to accommodate these (goals) when possible.”