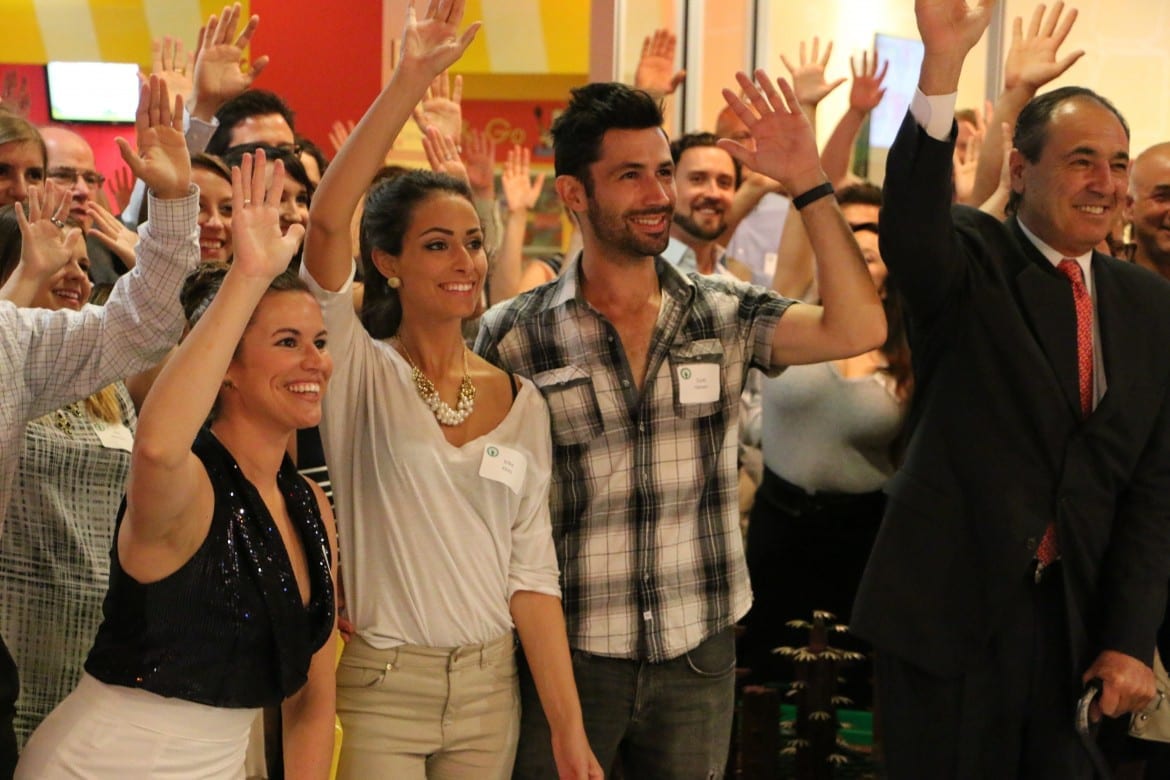 Leaders of Raise Your Hand for Kids, a cigarette tax campaign in Missouri, prompted attendees at a Thursday evening fundraiser to show their support for the effort by acting on the campaign's slogan. Participants included former Major League Baseball umpire Steve Palermo (top right), the guest speaker for the event. (Photo by Mike Sherry/Hale Center for Journalism)
Share this story

Supporters of an increase in Missouri’s cigarette drew about 100 people to a campaign event in Kansas City Thursday evening, headlined by a motivational speaker who said he could identify with the campaign’s goal of increasing funding for early childhood education.

The speaker was Steve Palermo, a former Major League Baseball umpire whose career was cut short in 1991 when a mugger’s bullet struck his spinal cord. The shooting occurred as he was coming to the aid of two waitresses outside a Dallas restaurant.

“It is of vital importance – education – I learned that in a family of education lovers,” said Palermo, a Boston-area native who now lives in Leawood, Kansas, with his wife, Debbie.

The irony of his appearance, Palermo said, is that he dropped out of college to pursue his dream of umpiring, rather than following in the footsteps of his father like his siblings. His father was a longtime elementary school principal.

Palermo later realized the risk he took by leaving college early to choose a career track that was far from a sure thing. He rose quickly through the minors to the major leagues.

“Had I not,” he told the crowd gathered at Legoland Discovery Center in Kansas City’s Crown Center district. “What did I have to fall back on?”

Education can be especially powerful for less fortunate children, Palermo said, by giving them “something to clutch on to” for a better life.

Leaders are calling the cigarette-tax campaign Raise Your Hand for Kids, and it seeks to raise Missouri’s lowest-in-the-nation cigarette tax by 50 cents to 67 cents per pack. They are aiming to get the question on the ballot in November of 2016.

The campaign estimates the increase would generate about $250 million annually, which the state would then allocate to all counties in the state based on their population of children ages birth to 5.

The campaign also says some of the money would go toward health screenings for children and toward tobacco cessation for pregnant mothers.

The Alliance for Childhood Education (ACE), a nonprofit based in the Kansas City area, is spearheading the campaign. Formed by business leaders, ACE is focused on workforce development in Missouri and Kansas.

ACE Vice President Erin Brower said she hoped Thursday’s event would raise about $10,000 toward the campaign. The plan is to hold similar events throughout the state, she said, acknowledging the need for other significant fundraising efforts.

Altomare said the political process is ripe for innovation through digital technology, such as the mobile application that Raise Your Hand for Kids is expecting to deploy to engage supporters of next year’s campaign and for future initiatives.

Mike Sherry is a reporter for KCPT television in Kansas City, Mo., a partner in the Heartland Health Monitor team