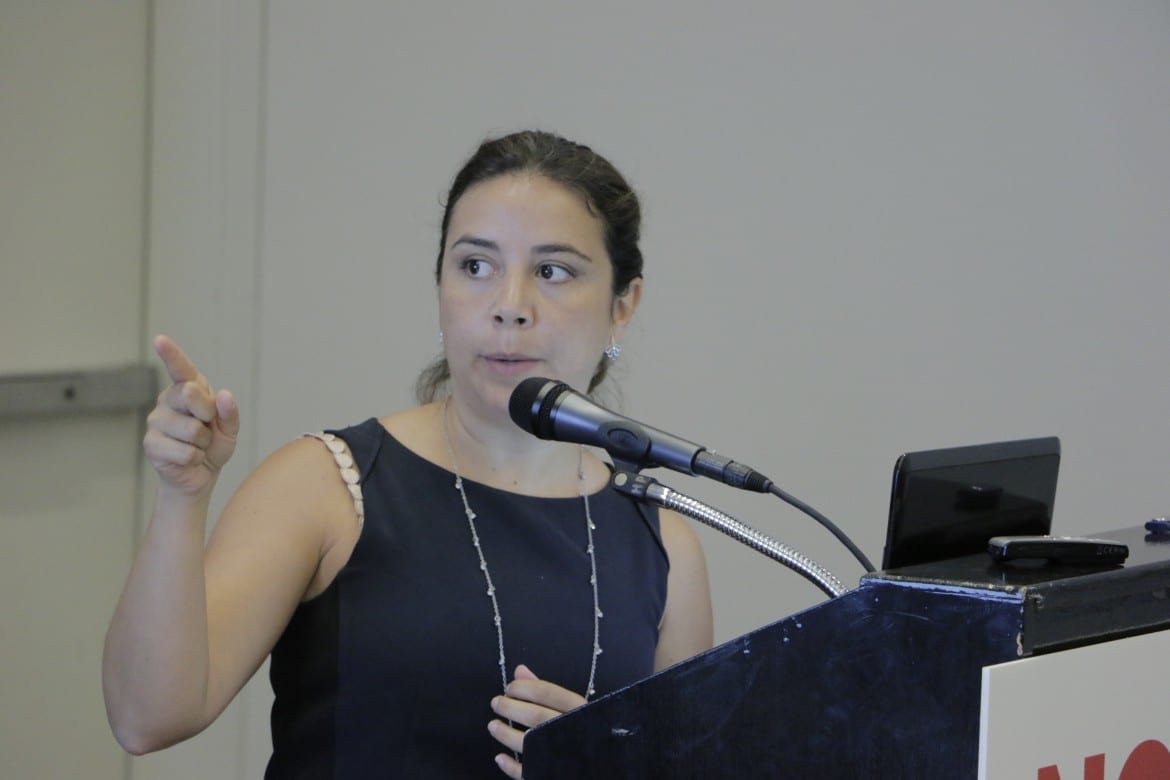 Laura Guerra-Cardus, associate director of the Children's Defense Fund in Texas, pointed to some of the data she presented during a Medicaid expansion panel held Saturday at the National Council of La Raza conference being held in Kansas City, Missouri. (Photo by Mike Sherry/The Hale Center for Journalism)
Share this story

Advocates for expanding Medicaid coverage to more low-income Americans must refine their strategies to win over lawmakers in states such as Missouri and Kansas, which have resisted efforts to loosen eligibility requirements.

That was the message Saturday during a panel discussion at the National Council of La Raza annual conference, which is being held at the Kansas City Convention Center.

“I would say it is going to take more than what we have been doing,” said Laura Guerra-Cardus, associate director of the Children’s Defense Fund in Texas.

Also on the panel were Joan Alker, executive director of the Georgetown University Center for Children and Families, and Jared Nordlund, a senior strategist with NCLR in Florida.

The panelists agreed that get-out-the-vote efforts should be part of a Medicaid expansion campaign aimed especially at Latinos, a growing demographic group.

“I really can’t think of any community that is better poised to raise this issue,” Alker said. “You will make a difference – no question.”

According to figures presented at the panel, nearly half the 4.3 million Americans who would gain coverage if Medicaid were expanded nationwide live in Florida or Texas. About 40 percent of the uninsured population in those two states are Lationos.

Thirty states, including the District of Columbia, so far have expanded Medicaid.

Under the Affordable Care Act, the federal government pays the full cost of expanding Medicaid through 2016 in states that increase income eligibility to 138 percent of the federal poverty level (FPL). After 2016, the federal share phases down to 90 percent.

In Missouri, a parent in a low-income family can make no more than 18 percent of the FPL to be eligible for Medicaid. The comparable figure in Kansas is 33 percent.

Nearly 210,000 residents in Missouri and Kansas combined would gain coverage if those two states expanded Medicaid, according to the Kaiser Family Foundation.

Founded in 1968, La Raza is the largest national Hispanic civil rights advocacy organization in the U.S. It has nearly 300 affiliated community-based organizations.

Nordlund said La Raza in Florida has developed a detailed campaign strategy focusing on key lawmakers to pressure them into voting in favor of Medicaid expansion. He said a key win this year was getting one of its three targets to vote for Medicaid expansion.

“Our goal is that, if we can hopefully create enough action in the district, that they actually will hopefully vote our way,” Nordlund said. “If they don’t, we can always hold them accountable in the upcoming election.”

“This is a very human issue and stories help bring this out,” she said.

Saturday was the opening day of the four-day annual conference, which drew approximately 5,000 registrants.

An accompanying family expo, which is free and open to the public, is expected to draw as many as 24,000 attendees during the conference. The expo includes health screenings and more than 100 exhibitors.

Tags: Getting By in KC • health • Medicaid