The University of Kansas Hospital: Patient admitted Monday does not have Ebola 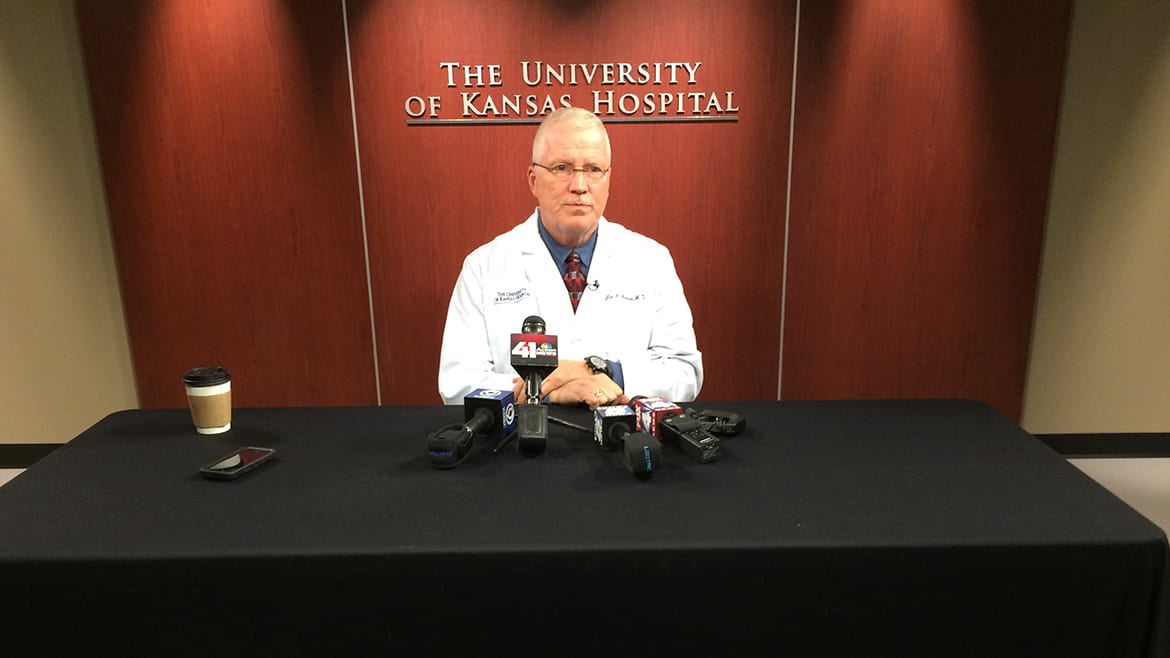 A man who was admitted Monday to The University of Kansas Hospital suffering from diarrhea and who worked recently near Africa’s west coast does not have Ebola, the hospital said Tuesday afternoon.

Results of blood tests showed the patient has not contracted the virus, which has killed more than 4,000 people in the West African nations of Liberia, Sierra Leone and Guinea.

The patient, who is in his 40s and thought to live in the area, had worked as a medic on a ship off the west coast of Africa. Although he did not have a fever when he arrived at the hospital, he had run a fever previously.

The patient, whose name has not been disclosed, was placed in strict isolation. His blood was shipped to the Centers for Disease Control and Prevention and to a private lab in Omaha, Neb., for testing.

Norman said initial lab results from Omaha showed the patient does not have Ebola. However, he said, the hospital is awaiting further confirmation from the CDC in Atlanta in the next day or two.

“But the preliminary results are very, very encouraging for this gentleman,” Norman said.

Meantime, the patient will be kept in isolation as a precautionary measure.

“As much as we would like to stand down and have less stringent infection control practices, we are keeping everything in place until we get the final word from Atlanta,” Norman said.

Norman said the patient, who probably has a tropical disease such as typhus, is showing improvement.

The University of Kansas Hospital said a patient who recently worked as a medic on a ship off the coast of West Africa came to the hospital early Monday morning feeling sick and is being tested for Ebola.

The hospital said the patient was at “low to moderate risk” of Ebola, but the hospital was taking no chances.

In a statement, it said the patient was met by staff wearing personal protection equipment and following guidelines established by the Centers for Disease Control and Prevention.

The hospital’s chief medical officer, Dr. Lee Norman, said at a news conference Monday evening that while he could not rule out Ebola, there are many other diseases fitting the patient’s symptoms. Tests to determine a diagnosis are expected no later than the end of the work day Tuesday.

In the meantime, the patient has been placed in an isolated area of the hospital with its own ventilation system, and staff will not treat other patients until a diagnosis is made.

“We put in our infection control practices right away — put a mask on him, didn’t let him have contact with anybody on his way in, whisked him right back to the room that we have specially appointed in the emergency department for this, where our staff, who are entirely in personal protective equipment, evaluated the patient,” Norman said.

Norman said the patient was a Kansas City, Kansas, resident in his 40s. He had been working on a commercial ship connected with the oil industry. It’s unclear whether he was exposed to the virus as testing for Ebola was unavailable on the ship.

The patient’s fluids are being tested by the Centers for Disease Control and a private lab in Omaha, Nebraska. Results are expected by the end of the work day tomorrow.

Norman said that the patient was more likely to have typhoid fever than Ebola. However, if he is determined to have Ebola, Norman said, he will continue to be treated at KU because he probably is in the early stage of the disease.

Jill Chadwick, a spokeswoman for KU Hospital, said the patient had been isolated from the rest of the hospital population

“We don’t want people to be panicked or worried because these people are isolated in the hospital,” she said, referring to the patient and those caring for him. “They are not anywhere near the general population.”

This is the second Ebola scare at the hospital. In September, a 23-year-old man who had returned home after serving with the Peace Corps in Sierra Leone called the hospital concerned that he had contracted the virus. Tests, however, showed he had a severe case of malaria.

Ebola is not an airborne disease. It is transmitted through contact with blood or bodily fluids such as sweat, saliva, vomit and semen. There is no cure for Ebola, but preliminary testing in humans of an Ebola vaccine was begun last month by the drug maker GlaxoSmithKline.

In West Africa, where the current outbreak began earlier this year, official estimates put the number of people infected with Ebola at more than 8,000. More than 4,000 have died.

The first patient to be diagnosed with Ebola in the United States, a 42-year-old Liberian national named Thomas Eric Duncan, died at Texas Health Presbyterian Hospital in Dallas Oct. 8. One of the nurses who cared for him has since tested positive for the disease.

Although it has generated scare-inducing headlines, health experts say Ebola is very rare. Far more people die of the flu every year than have died collectively of Ebola.

Alex Smith is a health reporter with Heartland Health Monitor, a reporting collaboration among KCUR Public Radio, KCPT Public Television, KHI News Service and Kansas Public Radio. He is based at KCUR.