To Kelly, the Sunflower State has recovered from past failings through her leadership – fully funding K-12 education, cutting taxes for working families and drawing new businesses for economic prosperity.

“I am really proud of my bipartisan record, but maybe most of all, I’m proud that we have restored some sense of civility to our politics, a spirit of working together, meeting in the middle to get things done,” said Kelly, a Democrat.

He spoke of families still reeling from being proclaimed non-essential workers during the COVID-19 pandemic and their problems with getting unemployment compensation because the state’s system was dysfunctional. 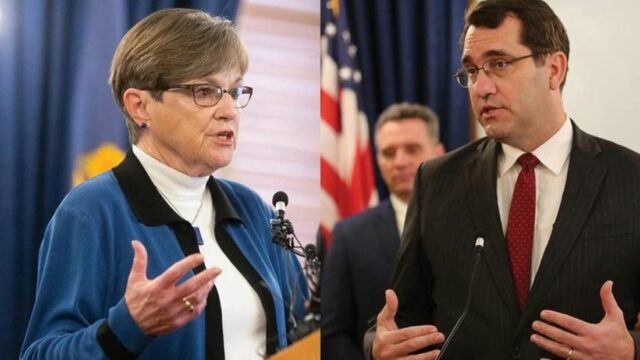 Kansas Gov. Laura Kelly (D) faces off against Kansas Attorney General Derek Schmidt (R) in an hourlong debate from the Doubletree Hotel in Overland Park. Kansas City PBS news host Nick Haines will moderate the exchange. Presented in partnership with the Johnson County Bar Association. You can stream the debate now on KCPBS.

Schmidt also emphasized school-aged children who are struggling with their studies and mental health due to long periods in which they were out of the classroom.

“This is about the people in this state who are not better off than they were four years ago,” Schmidt said.

Schmidt repeatedly sought to tie Kelly to President Joe Biden, pressing the idea that an unsecured southern border is linked to the horrific rise in fentanyl overdoses.

“Governor Kelly won’t stand up to Joe Biden,” he said.

Kelly countered that she is “focused like a laser on Kansas, not the federal government.”

Kelly countered by attempting to link Schmidt to former Kansas Gov. Sam Brownback. Brownback has been a recurring theme in the governor’s political advertisements, drawing references to his tax-cutting strategies that wound up severely limited funding available for government functions.

Electing Schmidt, she argued, would be returning to similar ways of governing.

Kelly worked references to Brownback into so many comments that at one point, Schmidt shot back with a quip about her “unhealthy obsession with one of her predecessors.”

Kelly agreed with Schmidt that the border should be secure, but stressed that comprehensive immigration reform was needed through Congress. How that could help Kansas, she said, was to help with legally bringing in employees to help with shortages of workers, especially in agriculture.

A rapt crowd attended the debate at the DoubleTree Hotel in Overland Park. The event also drew the attention of major media networks as numerous polls show the race to be tight.

The event was jointly sponsored by Kansas City PBS and the Johnson County Bar Association. It was live streamed on the KCPBS Facebook page and will be broadcast on KCPBS tonight at 7 p.m.

Former New Jersey Gov. Chris Christie was also in attendance, but stayed in the background watching the livestream, perhaps knowing that his presence would cause a media flurry.

Kansas has repeatedly been touted this year as one of the 10 most likely states where the governorship will change hands between the political parties.

Some verbal jousting occurred over Kelly’s stand on abortion.

The issue put Kansas in the national spotlight this year after the U.S. Supreme Court overturned Roe v. Wade, throwing the issue back to the states.

In August, voters in Kansas overwhelmingly, by about a 60/40 margin, decided that the procedure would remain legal in the state up until the 22nd week, along with other current limits put in place by the legislature.

“I am pro-life,” Schmidt said. “I prefer a Kansas that has fewer abortions, not more.”

Kansas is becoming a destination for care as other surrounding states, such as Missouri, have made abortion illegal.

Schmidt said that the voter’s rejection of the constitutional amendment must be respected, but that he would defend limitations and restrictions already in place.

“I believe they will be subject to legal challenge,” he said. “I am committed to defending them going forward.”

He said that Kelly’s views “are far out of the mainstream,” charging that the governor doesn’t believe in abortion limits.

Kelly said that she’s never wavered in her stand, not for 18 years.

“A woman’s medical decisions should be made between her, her family, and her doctor and that women should have bodily autonomy equal to that of men,” Kelly said.

Another difference highlighted during the debate was the issue of Medicaid.

Kelly is for expanding its coverage. And, predicting her own victory at the ballot box, Kelly said that she intends to present her fifth attempt to the legislature in January.

Schmidt said that he prefers to “better support the system for how it exists.” He also said that he would back a work requirement, mentioning the “able bodied” recipients in several comments.

Both candidates agreed that medical marijuana should be available to Kansans, especially for those who suffer from seizure disorders or PTSD among veterans.

But Schmidt said that he was most concerned with how the line would be drawn on legal usage and wanted to have law enforcement also at the table for conversations.

The importance of the upcoming midterm elections has been underlined in recent days by other candidates nationally and politicians of both parties. Control of Congress is in play.

Also, if she maintains the governor’s seat, Kelly can play a role in making history for female political candidates. A record 25 women are seeking to be a governor, representing both major political parties. That’s compared to the 16 women who sought the office in 2018, according to a recent briefing by the Center for American Women and Politics.

Democrats account for 16 of those female candidates, and nine Republican women are running for governor.

The record for female governors serving at once is nine, a total first reached in 2004.

Kelly has accumulated the endorsements of several prominent Republicans from Kansas.

On Monday, former U.S. Sen. Nancy Kassebaum endorsed Kelly. Kassebaum’s nod was unexpected because Schmidt worked for Kassebaum in Washington, D.C., and she supported his campaign for attorney general in 2010.

But when Kelly tried to boast during the debate that every living former Kansas governor had endorsed her re-election, Schmidt countered with a fact check. Jeff Colyer has endorsed Schmidt.

Schmidt’s most prominent endorsement is from former President Donald Trump. Trump won Kansas in 2020. And Republican voters far outnumber Democrats in the state.

During the debate, Schmidt also touted support that his candidacy is receiving from law enforcement, including more than 30 current and former sheriffs and the Kansas Fraternal Order of Police.