KC Week in Review: ‘Khamun in’: A sneak peek at Union Station’s biggest exhibit ever 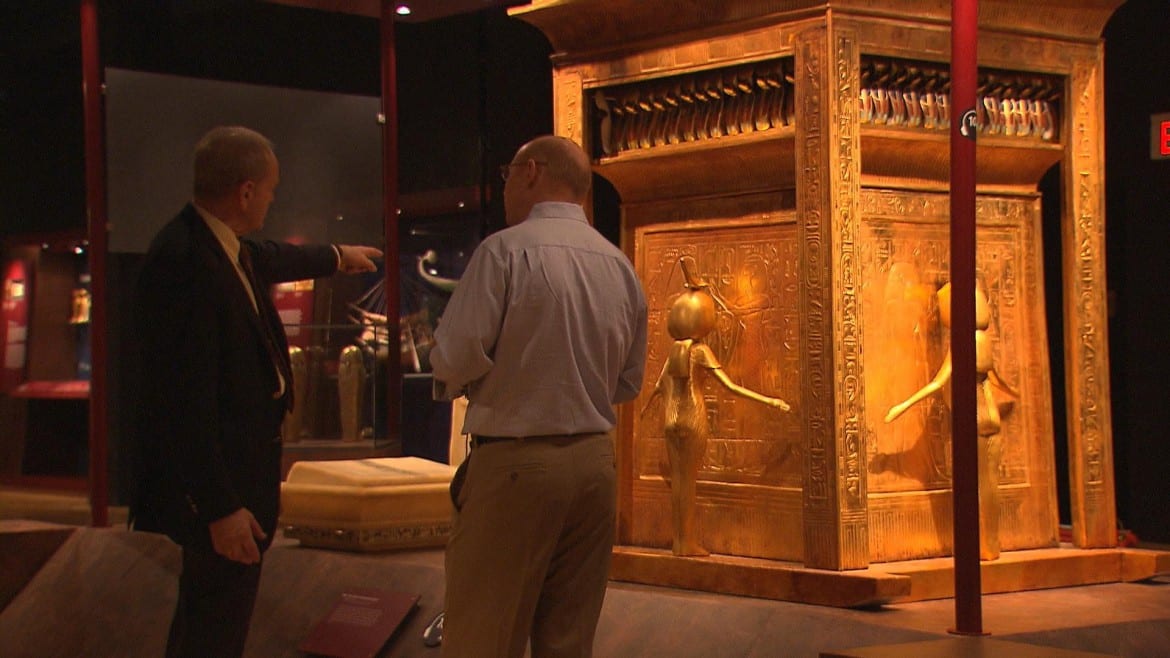 That’s the claim of the producers behind ‘The Discovery of King Tut’, the first stop in the country for a more than 1,000 artifact exhibit that has already been touring Europe since 2008.

While the exhibit at Union Station has everything from golden chariots and thrones to the iconic death mask of the Pharaoh himself, they are reproductions. Original Tut artifacts have toured before, but they are now back in Egypt, which is in turmoil. Will that quell the enthusiasm?

The exhibit’s producers say the reproductions are faithfully crafted by Egyptian artists to the smallest detail. And visitors will get to do things they’ve never done before, like enter the tomb, chamber by chamber and encounter the treasures just as they were placed when they were sealed up with Pharaoh Tutankhamun more than 3,300 years ago.

Is Kansas City becoming like California? The election ballot Tuesday certainly may look like it, with five separate ballot questions for voters to decide. Chances are good you will know precious little about any of them, because there’s been very little publicity. But all is not lost—we have your handy dandy primer on what’s at stake.

QUESTION #1: You may remember Kansas City’s multi-billion dollar sewer problem with pipes that date back to the Civil War era. Question 1 asks: Should Kansas City approve $500 million in revenue bonds to keep the federally required modernization of the city’s sewer and water system moving forward?

QUESTION #2: Shall Kansas City charge hotels and motels in the city a new fee of up to 350 dollars a year? Why? To inspect and “clean up motels where unsanitary conditions threaten public safety.”

QUESTION #3: Should Kansas City move local elections to warmer months? Shift the February primary to March and the local general election to June?

QUESTION #4: This is a charter change that requires the city to adopt a 5-year financial plan.

QUESTION #5: Another change to the City Charter allowing a reduction in the number of city departments from 9 to 6.

MAJORITY OF KCMO SCHOOL BOARD SEATS UP FOR GRABS

Also being decided Tuesday is a majority of the seats on the Kansas City, Missouri school board. Despite all of the headlines over accreditation, nine candidates are running for five slots up for grabs. What’s at stake in this election?

PICKING A NEW MAYOR IN INDEPENDENCE

It doesn’t get as much attention, but on Tuesday voters in the second largest city on the Missouri side of our state line will be picking a new Mayor. The longtime leader of Independence, Don Reimal, is stepping down after almost a decade on the job.

On Tuesday, you will decide who replaces him.  Two candidates, both members of the Independence City Council, are campaigning for the top office: Jim Schultz and Eileen Weir.
RNC: MAKING THE CUT

In other news this week, Kansas City makes the cut, at least for now. That’s the cut for the right to host the Republican National Convention in 2016. Not so lucky were Phoenix and Columbus, Ohio, that were both eliminated from consideration. Now Kansas City is one of just six cities vying for the GOP’s main event along with Las Vegas, Denver, Dallas, Cincinnati and Cleveland.
STREETCARS BACK IN THE NEWS

The debate over expanding the city’s streetcar system moved from City Hall to a Jackson County courtroom, where a judge heard testimony to determine the legality of a proposed new streetcar taxing district.