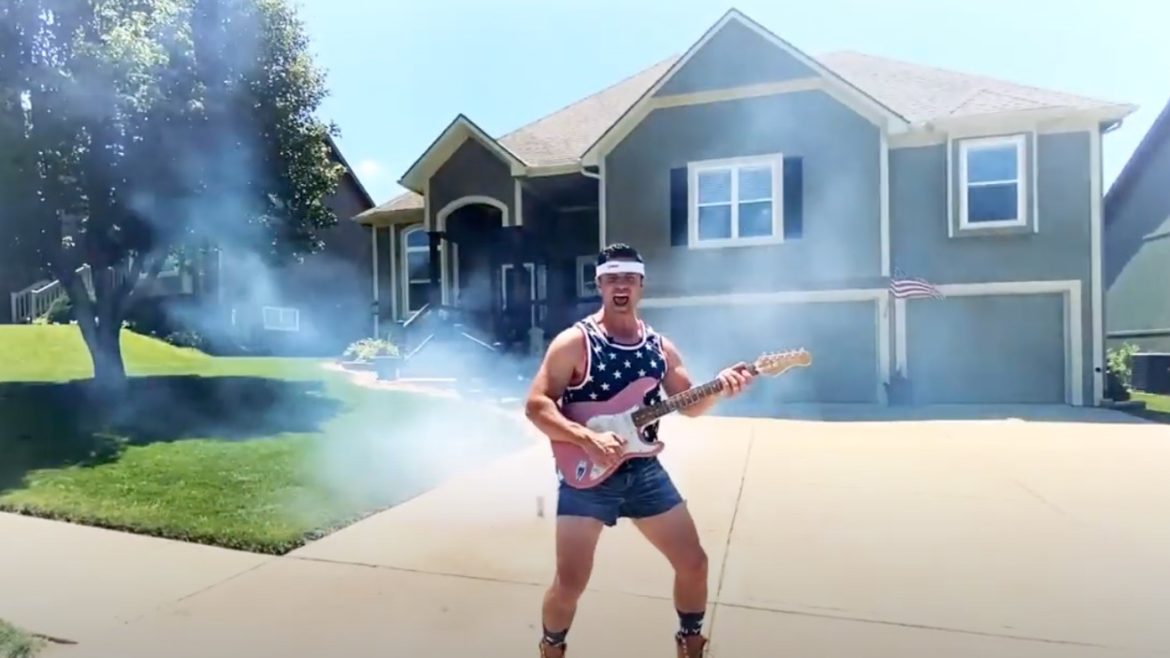 Decked out in jean shorts, Timberland boots, an American flag tank top and a Wilson branded headband, Jason Rains looks like someone who should be crushing a 12-pack of Budweiser on the tailgate of a Chevy pick-up in the heat of July.

He’s not here to do that, at least not yet. He’s here to sell a house. The methods in which he does so are, shall we say, creative.

Rains has been cranking out music video parodies of popular songs to carve out a career in real estate. Leaning into social media promotion via parody videos and skits, Rains, a Realtor with RE/MAX Elite in Lee’s Summit, Missouri, closed 50 deals in 2020. That’s good enough to put him in the top 15 among nearly 900 RE/MAX agents in his region.

His methods may be unconventional. But there is little dispute that it works.

She had seen his videos pop up on her Facebook feed via mutual friends. When it came time to sell her home, Jason was her choice in Realtor.

“He came over and kind of did a walkthrough,” Morrow said. “At the end of that meeting he said that he would follow up within a week or so to let me know what his ideas were for marketing it, and that’s where things really got exciting.”

Jason informed Morrow he would be showing off the house in a video parodying the Tom Cruise film “Risky Business.” In the video, Rains pranced around in his underwear, lip syncing his own lyrics set to Bob Seger’s “Old Time Rock n’ Roll.”

“I watched the video one time,” Morrow said. “I had to mute it, because I don’t know if you’ve heard Jason’s singing, but it is… special.”

That video played on repeat at an open house event for the home. When it was all said and done, Morrow sold the home for $26,000 above the initial asking price.

His most recent marketing production was for a home located at 101 E. Pocahontas Lane in Kansas City. The video parodies Jason Aldean’s “Got What I Got.” It blew up online after being shared in several Facebook groups, a Zillow-tour Instagram page, and Twitter. The video now has more than 500,000 views.

“There are ones that I imagine would have gone viral, and then it’s the one you would least expect, it just takes off,” said Luke Zubeck, CEO of Juke Media KC, the production company that shoots all of Rains’ videos. “He does a very good job on social promoting it. He’s in all of the right places and sending it out to people.”

Rains is proficient in search engine optimization and uses that to his advantage. It’s a calculated plan to keep people engaged and entertained, in order to get more eyes on the house he is trying to sell.

“What I recall about the showing was that there wasn’t a lot of people,” Brad Rodebush, a client of Rains, said. “People came, but I think because of COVID (there were less people). I think what he did with these videos, and how he did them, got lots of views, good and bad. But I think it spread the word and it got people to the house to see it, and it helped us sell it above listing.”

Not everyone is in love with the videos, however. Some Realtors have told Jason they are embarrassing, or making light of their profession. One Facebook user simply commented, “It’s REALLY BAD.”

Rains is no singer, and he readily admits it. But that won’t stop him from trying. His next project will include a parody of another ‘80s hit from Tears for Fears.