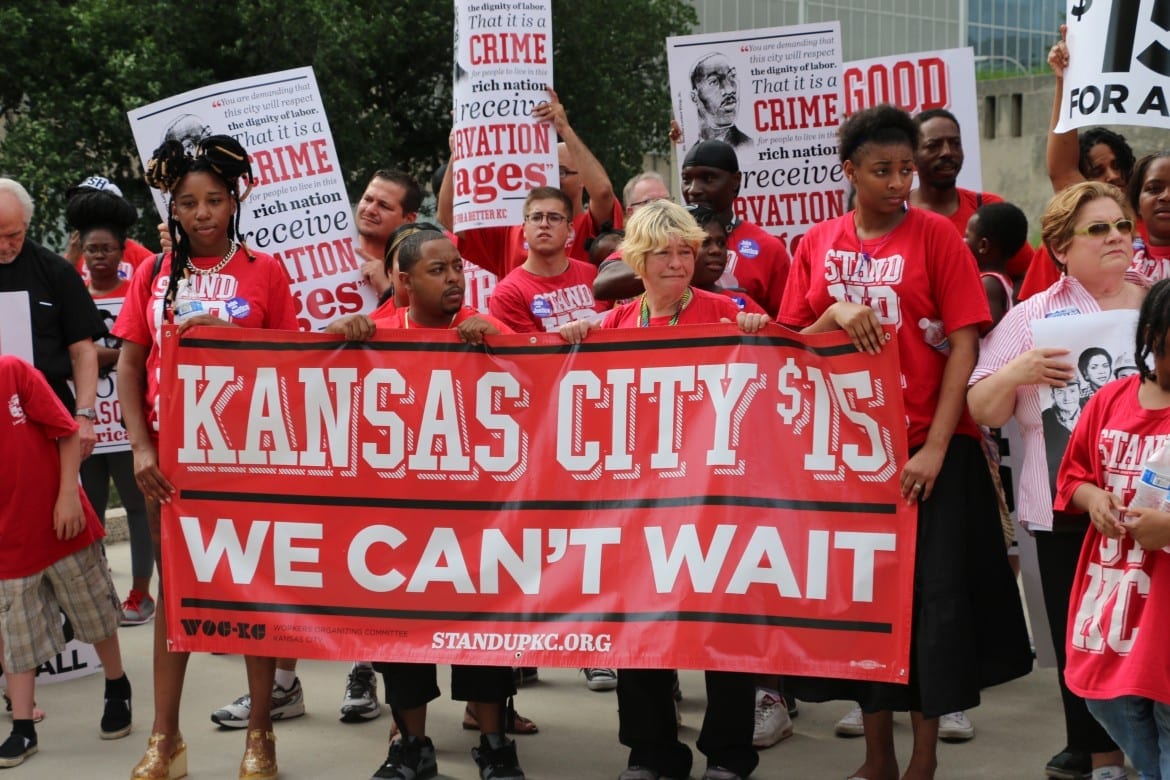 At a rally on the steps of KCMO’s City Hall Monday, several advocates called on Kansas City’s city council to pass a minimum wage increase to $15 an hour. The rally was hosted by two local organizations, Stand UP KC and Missouri Jobs With Justice, in anticipation of an upcoming vote on the issue by Kansas City councilmembers.

The city council is expected to vote on the minimum wage at its next meeting on July 16th. Missouri legislation that would ban cities from raising the minimum wage is putting pressure on council members to address the issue. Missouri HB 722, which goes into effect August 28th, states “a city within the state would have no power to institute its own ordinance on minimum wage.”

Anita Russell, president of the KC branch of the NCAAP, was one of a number of guest speakers who spoke to the enthusiastic crowd.

“We are here at City Hall on the very first day of summer to say to our mayor and our city council, increase the minimum wage. Mr. Mayor give us a raise,” she said to a cheering crowd.

Fellow 4th district Councilman Jim Glover said he would like the city council to reach a consensus about the issue and “give Kansas City a raise.”

“Minimum wage workers spend all of the money they make on basic needs: rent, food, clothing, utilities,” Glover said. “And yet, it is not enough.”

At the halfway point of the rally, the large and vocal crowd, led by Missouri Jobs With Justice KC organizer Justin Stein, marched one city block around the perimeter of Kansas City’s City Hall. The group chanted and sang songs promoting a minimum wage increase.

The second half of the rally featured the Rev. Vernon Howard Jr. The pastor of St. Mark Union Church, Howard spoke passionately about the plights of the poor and the injustice of low wages.

“We are not wishing, we are not asking, we are not advocating; we are demanding. Demanding $15 an hour. Demanding right now, that justice will flow like waters and righteousness like a mighty stream right here in Kansas City, Missouri,” he said.

Rev. Howard Jr. is also a member of the Southern Christian Leadership Conference (SCLC). Started in 1957, the first president of the SCLC was Martin Luther King Jr.

Monday’s keynote speaker was Terrence Wise. A married father of three daughters, Wise has worked in the fast food industry for the last 18 years. He has gained national attention and has become the face of the fast food workers fight for better wages.

He spoke about his family as his main motivation to continue the fight.

Tags: disparity • Getting By in KC • minimum wage